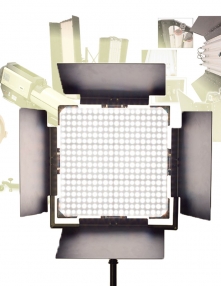 The Science and Technology Council has identified a need for an unbiased investigation of solid state lighting (SSL) technologies, which includes LED emitters, for motion picture production. Issues with SSL have been identified regarding its ability to supplement and integrate with existing lighting technologies such as tungsten, fluorescent, HMI, and Xenon that are currently used in the production of motion pictures. The primary purpose of this investigation is to provide the industry with data needed to properly evaluate the impact of using SSL, as well as to provide a framework for the evaluation of future light emitting technologies as they are developed. The Council’s efforts have been focused on providing the motion picture industry with accurate and previously unpublished radiometric and photometric measurements (e.g., spectral power distribution, radiant flux, luminous flux, etc.) typical of various LED light sources currently in use.

How Long has the Academy Been Concerned with Lighting?

Since the Academy's inception. The first technical report ever published by the Academy was on a new invention – incandescent lighting. “Academy Reports - No. 1 - Incandescent Illumination” dated 1928, was written one year after the founding of the Academy. This 80-page report laid the cornerstone of incandescent lighting in motion pictures. It is a rigorous study encompassing all the relevant issues, including the contemporary economic advantages over alternatives such as arc lights. One fascinating aspect of the study was the emphasis on color rendering, which was entirely in the context of the black-and-white film era. You can download a copy of the report by clicking on the link:

Many of the parameters provided by the manufacturers for solid state lighting fixtures are typically not independently verified. The fixtures will be measured to provide the following information to the motion picture industry:

Visible light is a form of electromagnetic energy, part of a spectrum that includes radio waves, X-rays, ultraviolet and infrared. Visible radiation is commonly called “light”, and is usually described by its wavelength, which is expressed in nanometers. One nanometer is one billionth of a meter, or roughly four ten-billionths of an inch. The relationship of light to other forms of energy is illustrated below. The human eye can only see a part of this energy spectrum – a very narrow band of wavelengths between about 380 and 780 nm. The hue we see as blue lies below 480 nm, green between approximately 480 and 560 nm, yellow between 560 and 590 nm, orange between 590 and 630 nm, and red appears at wavelengths above 630 nm.

The curves shown below are the spectral power distributions for three common references often used as a basis for comparison with actual lighting instruments. They are standard illuminants defined by either the International Commission on Illumination (CIE) or the International Standards Organization (ISO). The first curve – labeled “CIE E” – represents a theoretical source that has equal energy at all wavelengths. The second curve – labeled “CIE D55” – represents mid-morning or mid-afternoon daylight and has a correlated color temperature of approximately 5500 degrees Kelvin. The third curve – labeled “ISO Studio Tungsten” – represents the light emitted by tungsten filament light bulbs. 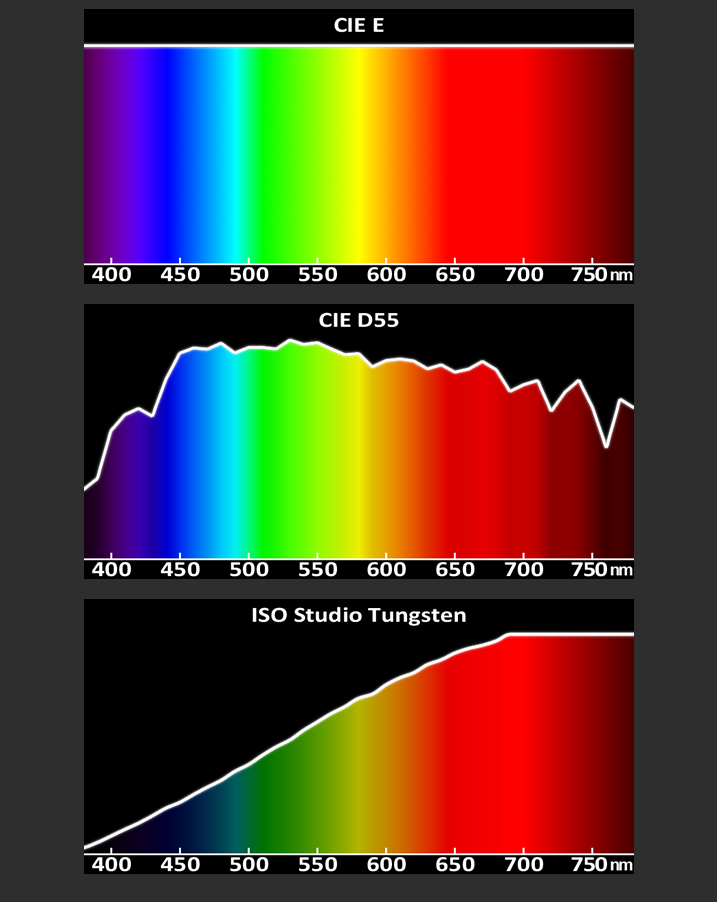 The following curves represent typical LED lighting instruments currently on the market. The LED-based instrument curves are very different than the references curves, and therefore the hues of objects illuminated by them are noticeably different relative to the reference curves and to each other.

A similar approach to producing visible white light is the “blended phosphor” LED that uses a mix of phosphors with the blue emitter to create a curve that is more like Studio tungsten lights.

Another type of instrument uses multiple LEDs that each emit light at different wavelengths. The simplest form of a multi-emitter instrument is a “tri-color panel” using red, green and blue LEDs.

A variation of the multi-emitter technique uses additional LEDs that emit additional wavelengths to create a closer match to Studio Tungsten lighting, although the resultant curve is “spikey”. This has noticeable side effects in motion picture production, which are discussed below. 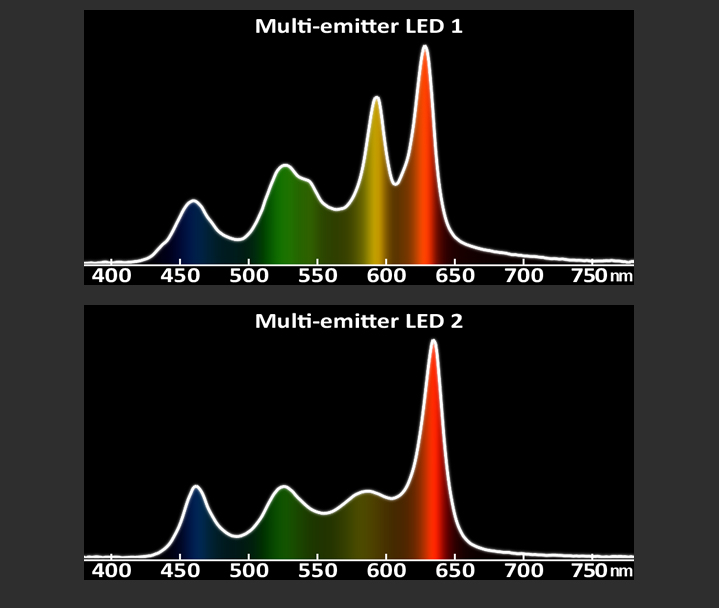 Even though a lighting instrument produces what appears as white light to the human eye (or to film or a digital camera’s sensor), the hue of an object being illuminated by “apparent white light” can be drastically different than expected. A common test chart used for assessing color performance of motion picture imaging systems is the Macbeth chart, which consists of a number of patches of well-specified colors and gray shades. The charts below are called “split Macbeth charts” because each color patch shows the visible effects of two light sources – studio tungsten in the top half of the patch, and an LED lighting instrument in the bottom half. Each chart below corresponds to the light sources described by the spectral power distributions above. Although your computer display is not likely to be a calibrated reference monitor, the wide variations in color patch hue caused by different illuminant spectral power distributions should be readily apparent.

Illuminating the Future: The Arrival of Solid State Lighting