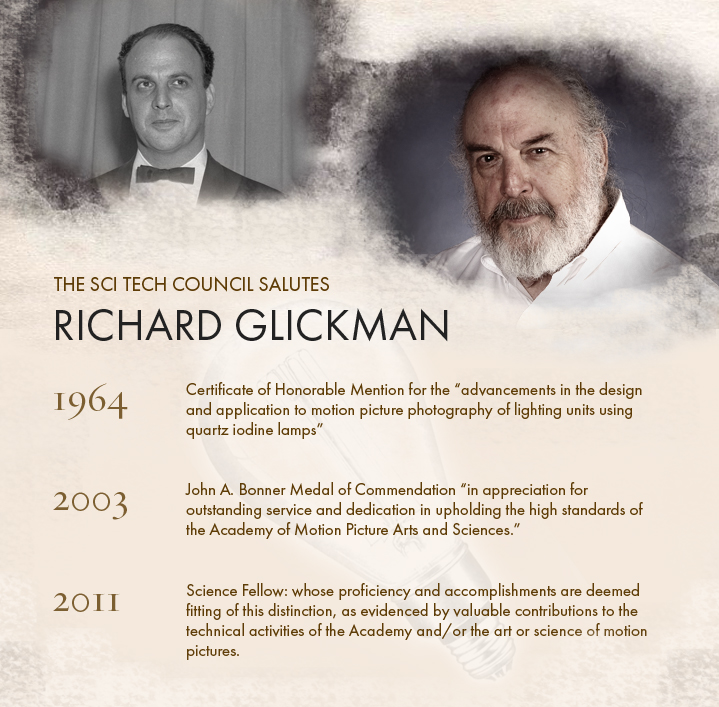 Richard B. Glickman joined the Academy in 1967 as a member of the Associates Branch, and became a voting Member-at-Large in 2011. For more than 25 years Glickman has served on the Scientific and Technical Awards Committee, which annually investigates devices, processes and technologies for potential Academy Awards recognition, and has also been a longtime member of the Steering Committee. Glickman became a founding member of the Academy's Science and Technology Council in 2003 and maintained his membership through 2012. He continues to serve on the Council's Technology History Committee. 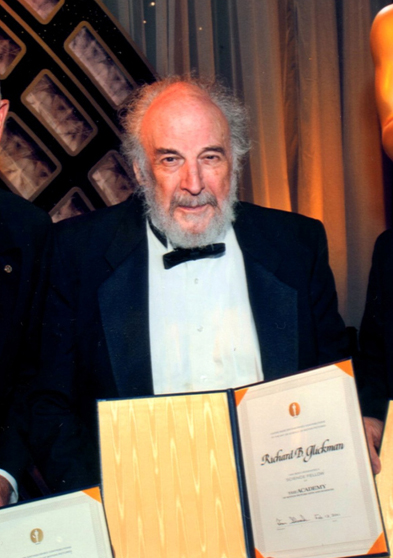 Over his many decades in the film industry, Glickman has designed lighting equipment, conceived new approaches to using incandescent, tubular tungsten-halogen, and other lamps, and opened overseas markets for filmmaking equipment. During the major industry shift that brought the more technical aspects of filmmaking to the forefront, he participated in discussions of craft that increasingly included subject-matter experts who understood rapidly changing technologies and their implications. He also was very involved in early discussions related to the motion picture industry's need for a forum for technological research, standards and advances, which eventually led to the creation of the Academy's Science and Technology Council.

Meeting Milt Forman in 1959 and being hired at ColorTran Industries, formerly Natural Lighting Company, was Glickman's entry to the film lighting world. As a chief engineer, he directed the pioneering use of tungsten-halogen lamps to achieve a new range of lightweight, portable professional lighting equipment. He subsequently helped design and develop multiple lamp fixtures and the first daylight balance Par 64 light sources, which made possible the company's entry into the electronic dimming field.

During his tenure at ColorTran, Glickman was active in the Education Committee of the Hollywood Branch of the Society of Motion Picture and Television Engineers (SMPTE), where he presented numerous technical papers at the organization's national conferences. In addition, he has served as the national vice-chairman of the Theater, Television and Film Lighting Committee of the Illuminating Engineering Society and on the U.S. Subcommittee on Entertainment Lighting of the CIE, the international illumination standards organization.

In 1964, Glickman, Forman and Daniel J. Pearlman were honored with an Academy Technical Achievement Award "for advancements in the design and application to motion picture photography of lighting units using quartz iodine lamps."

In the 1970s Glickman served as a technical consultant to Robert Hagel, then general manager of the Burbank Studios, and spent eight years working on upgrading facilities. He redesigned TBS Stage 2 into a semi-automated stage that was suitable for both film and television production. Its main feature was a drop ceiling with a structural grid on which a technician could move about. Through slots built into the ceiling, the technician could lower telescopes carrying lights to a technician on the floor, who could then adjust the lights as needed. This enabled lights to be removed, replaced and/or reset for different scenes, and because there were slots across the entire ceiling, the lighting could be customized for each project. The drop ceiling also was designed with its own power supply, which cleared unwieldy electrical cabling from the floor.

As his own engineering business demanded more of his time, Glickman left ColorTran to start Gliconen (Glickman Consulting Engineer) Corporation in 1990. He consulted on a wide range of projects, getting involved in everything from product design to technical marketing in the entertainment industry. His projects included plastic filter media for lighting control and the creation of the Rosco 4500 Fog Machine, which included a 100 percent duty cycle with triple capacity to enable a high volume of fog to fill a large space quickly.

While consulting with Rosco, Glickman helped expand the color range of the company's Cinegel filters, used in motion picture lighting, and designed a clear lens filter, which eliminated the problematic green cast when images were captured on film. His work also included adapting a two-pin stage plug to a three-pin grounded plug when AC replaced DC power supplies at the major studios.

In 2003 Glickman received the John A. Bonner Medal of Commendation, which is given in appreciation for outstanding service and dedication in upholding the high standards of the Academy of Motion Picture Arts and Sciences. In 2011 he was named a Science Fellow in recognition of his valuable contributions to the technical activities of the Academy and the art or science of motion pictures. According to Glickman, "It's all mechanical engineering. The first thing you do is try to decide what it is you need to do and then you kind of wrap things around it… Each thing was its own solution to a problem."

Glickman continues to consult on manufacturing issues, tooling requirements and related matters. One of his ultimate goals is for science and technology to have its own branch at the Academy.

Glickman and his wife Harriet reside in Southern California. They have three children, Katherine, Paul and Simon; and three grandchildren, Jesse, Jonah and Caleb.