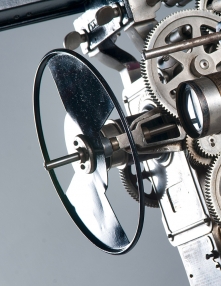 As the digital age progresses, film projectors are becoming historical artifacts from cinema’s past. The images captured in the catalog for Tech Art 2: The Projection Story casts projection-related objects in another light: as exquisitely designed, remarkable objects of beauty.

The often-overlooked craft of projection is highlighted in over 30 full-color images shot from 2009 to early 2012 by photographer Vince Gonzales. His work captures artifacts from the Academy’s Richard O. Bartel Collection (one of the world’s most comprehensive collection of projection equipment), the USC Hugh M. Hefner Moving Image Archive and Paramount Pictures.

Although projection is a simple concept, it has gone through considerable changes over the past century, adapting to breakthroughs in technology as well as advances in sound formats, film gauges and lighting.

A native of Los Angeles, Vince Gonzales is a self-taught photographer who has worked in landscapes and portraits since the early 1990s. His photographs have appeared in Variety, the Hollywood Reporter, the Los Angeles Times, Millimeter, Hollywood Independent, and Emmy Magazine. He has previously exhibited at the Klasky Csupo Studio Gallery in Hollywood, the ArcLight Hollywood, the Forest Lawn Museum in Glendale and the Hollywood Entertainment Museum.