The Photography of Vincent Gonzales 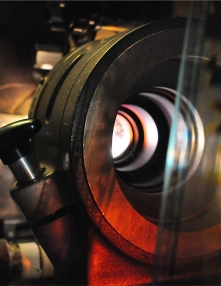 For several years, Vince Gonzales has been capturing a unique side of the artifacts of motion picture technology: their beauty as objects.  While most may see merely function – a microphone, a splicer, a projector – Gonzales uncovers dramatic shapes, distinctive textures and colors, hidden details of craftsmanship and design; in short, the remarkable aestheticsof these otherwise forgotten machines of the trade.

Tech Art: The Photography of Vince Gonzales contains more than 30 full-color images captured between 2000 and 2006 at such film industry institutions as Paramount Pictures, the University of Southern California School of Cinematic Arts and Panavision Inc., as well as from the private collection of Erkki Huhtamo, professor of design and media arts at the University of California, Los Angeles.

This softcover catalog, produced by the Science and Technology Council of the Academy of Motion Picture Arts and Sciences, accompanied the 2006-2007 exhibition of Gonzales's photographs at the Academy's Pickford Center for Motion Picture Study in Hollywood, California.

A native of Los Angeles, Vince Gonzales is a self-taught photographer who has worked in landscapes and portraits since the early 1990s.  His photographs have appeared in Variety, the Hollywood Reporter, the Los Angeles Times, Millimeter, Hollywood Independent, and Emmy Magazine.  He has previously exhibited at the Klasky Csupo Studio Gallery in Hollywood, the ArcLight Hollywood, the Forest Lawn Museum in Glendale and the Hollywood Entertainment Museum.