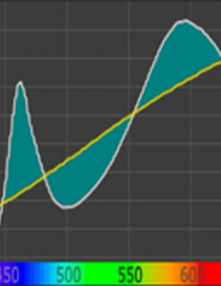 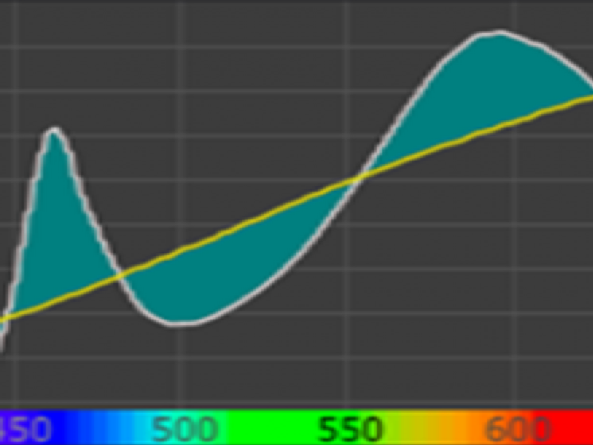 The Academy of Motion Picture Arts and Sciences, working with cinematographers, cinema lighting experts, lighting manufacturers, and lighting, imaging, and camera scientists and engineers, has developed a new index for the spectral evaluation of lights. The Spectral Similarity Index, or SSI, addresses issues with existing indices such as the Color Rendering Index (CRI) and the Television Lighting Consistency Index (TLCI) that make them inappropriate to describe lighting for digital cinema cameras -- issues that have become more evident with the emergence of solid-state lighting (SSL) sources such as LED’s.

In contrast to the relatively smooth, broad-spectrum power distributions of blackbody emission, tungsten incandescence, and daylight (and the ISO standardizations of these sources), many solid-state lights are characterized by peaky, multimodal, or narrow-band spectral distributions. These spectral distributions can wreak havoc with color rendition (by both film and digital sensors), since film and digital cameras are all expressly designed to work with, and are indeed optimized for, standard tungsten and daylight. Existing color metrics were not designed for cinema cameras; CRI, for example, is based on human color sensitivity rather than camera sensitivities. The TLCI measures rendering by an idealized three-chip camera, which does not adequately account for the differing spectral sensitivities of single-chip cinema- or still-camera digital sensors.

For these reasons, SSI is not based on human vision, nor any particular real or idealized camera, and does not assume particular spectral sensitivities. Rather, it quantitatively compares the spectrum of the test light with that of a desired reference light source, expressing the similarity as a single number on a scale up to 100 (which would indicate a perfect match). High values indicate predictable rendering by most cameras (as well as “quality” of visual appearance); low values may produce good colors with a particular camera but not with others. SSI is useful for cinematography, television, still photography, and human vision.

SSI has been adopted and published by the Society of Motion Picture and Television Engineers as a SMPTE standard, ST 2122.

Additional information on basic lighting and color principles, lighting metrics currently used in motion picture production, why SSI was developed, and how it is calculated, is available in this white paper:

A tool for calculating the SSI is also available:

Instructions for using the calculator can be found at:

SSI is fully described in a presentation that was given to the Society of Motion Picture and Television Engineers (SMPTE) at its technical conference in 2016 (accessible by SMPTE and IEEE members at http://ieeexplore.ieee.org/document/7819442/). (Note: In that presentation, the only reference illuminants postulated were ISO daylight and studio tungsten. SSI was later revised to add the ability to use other reference illuminants such as blackbody illuminants of arbitrary color temperature and CIE standard illuminants.)

Additional general information on solid state lighting and how it affects color rendering can be found on the main SSL page:

Cinematographers see value in an index that provides a level of confidence in color rendering independent of the camera used. We believe this is also applicable to other areas in which quality reproduction rendering or perception of color is important.

The Academy welcomes feedback regarding SSI. Questions and comments should be sent to SSI@oscars.org.