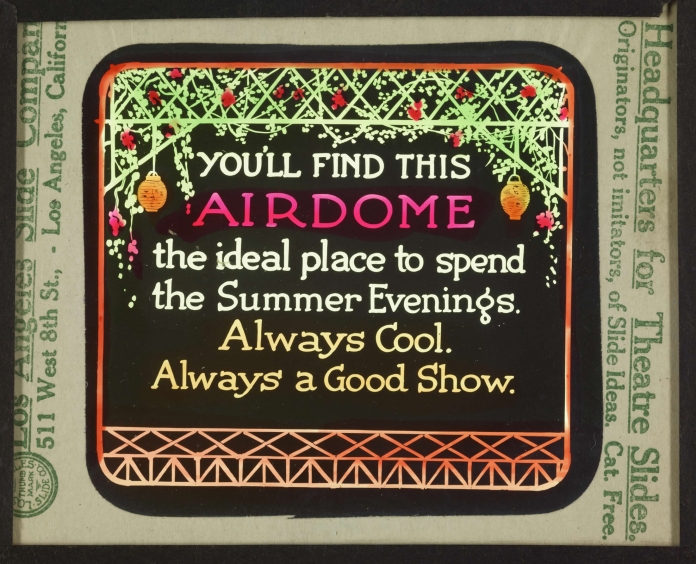 With summer upon us, we hark back to a time when the warmer months allowed films to be shown outdoors at airdomes, and theatergoers were familiar with the glass slides that were part of the show. In their earlier days, glass slides, also known romantically as “lantern slides,” were part of an entertainment device called the magic lantern. A precursor to motion pictures, magic lanterns were popular both in the home and in theaters in the 18th and 19th centuries. They projected the images from hand-tinted glass slides onto a screen or wall through the use of candles or lanterns, which grew in power as the decades progressed.

From the silent era to the 1930s, glass slides found their way into motion picture theaters, where their uses included advertising upcoming films, making announcements on behalf of the theater management and providing lyrics for sing-alongs, among other things. They measured approximately 3 inches by 4 inches, and were sometimes meticulously hand-colored. Many glass slides were matted together by paper and another piece of glass, which helped protect the beautiful images from dust and scratches.

The Margaret Herrick Library’s Special Collections Department collection of glass slides contains more than 600 slides, including some related to World War I.

More images from the glass slides collection can be found online in our Digital Collections.