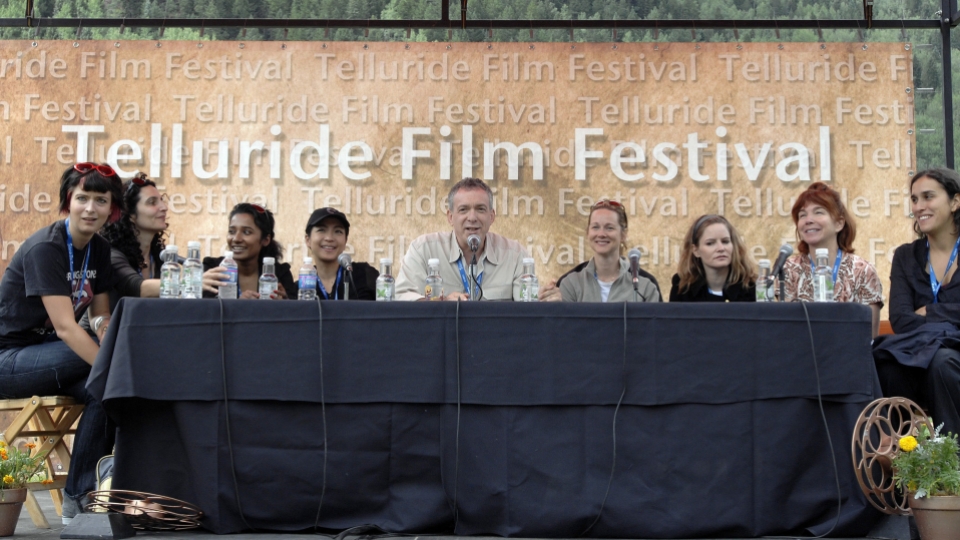 “Thank you both so much for that fantastic experience,” wrote historian and filmmaker Kevin Brownlow to Bill and Stella Pence after the 8th Telluride Film Festival in 1981. When festival attendees enthuse over the event, it is frequently in reverent, semi-religious tones, and the word “experience” is invoked more often than not, facts immediately apparent in the clippings, correspondence and other documents contained in the Telluride Film Festival records, which were recently cataloged for Special Collections at the Margaret Herrick Library.

Brownlow was evidently still stunned by what perhaps could have measured up as an anticlimax, coming only two years after the 6th festival, with its astonishing outdoor screening of Brownlow’s restoration of Abel Gance’s Napoleon. Running at its most complete length since its 1927 premiere, with Gance in attendance, the film was a revelation for many, with Brownlow declaring that Gance “encountered more adulation, affection and generosity in those few days than in the past fifty years of his career.” The screening lasted until the wee hours of the morning, with viewers enthralled by the widescreen triptych visual splendor and the purple mountains’ majesty of even more Rocky Mountains behind the screen than there were holding it up. Eleven years later, when the Pences showed Clint Eastwood how that same outdoor screen, on which they were planning to project his newest film, White Hunter, Black Heart, looked against its awe-inspiring background, Eastwood protested, “Nobody’s going to watch the movie!” 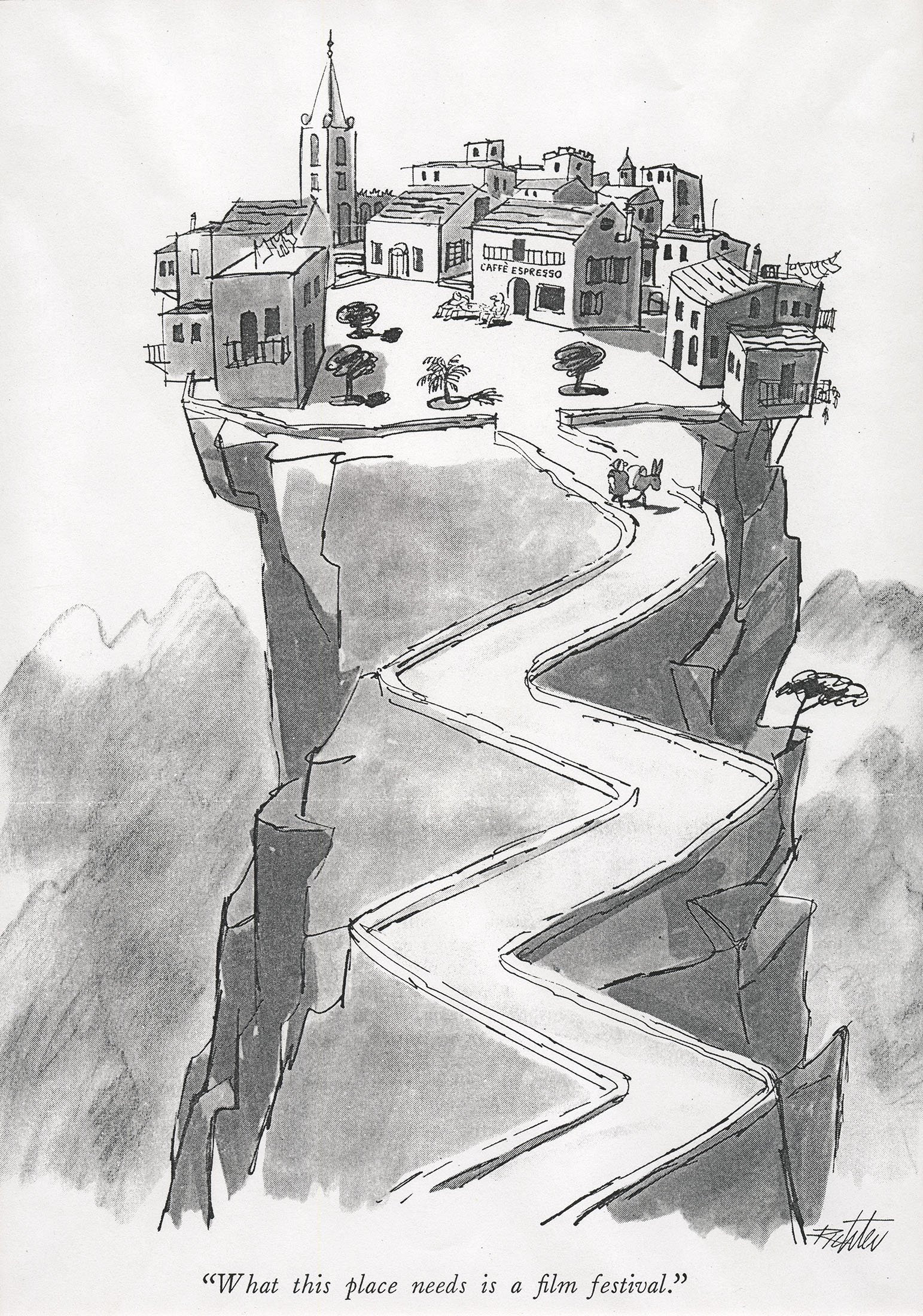 Always held during the Labor Day weekend, the Telluride Film Festival marks its 42nd year in 2015 and will be held from September 4th through the 7th. The festival was founded in 1974 by Bill and Stella Pence, Tom Luddy and James Card, along with the Telluride Council for the Arts and Humanities, in a small mining-turned-skiing town located 8,745 feet up in the Rockies’ San Juan mountain range in southwest Colorado. If there was an unlikelier location for an upscale film festival anywhere on Earth, no one seemed to be able to think of it. But the Telluride Festival took people’s breath away – at that elevation, sometimes literally. Brownlow has also commented, “The pure air of Telluride…and the combination of astonishing landscapes and exceptional films recharge one’s spirits. One is left thinking that the cinema must indeed be a great art if it can take you to a place like this.” Yet it soon became clear that it was best to caution novices against too much mountain climbing until they became acclimated to the altitude, and to suggest that perhaps they should arrive a day before the films started.

Over the decades, many of the honorees have fallen in love with the festival during their tributes and become regular attendees, turning up year after year to enjoy the events just like any other moviegoer. This enchantment of celebrities as well as of regular folks has become part of the Telluride “experience,” and any given year, you might pass on the street, see in line or just bump into, such luminaries as Martin Scorsese, Isabella Rossellini, Ang Lee, Jack Nicholson, Agnès Varda, Michael Moore, Philip Glass, Emily Watson, Julie Christie, Carrie Fisher, Jean-Luc Godard, Jennifer Jason Leigh, Marion Cotillard, Peter Brook, Catherine Deneuve, Meryl Streep, Gérard Depardieu or David Lynch. In years past, you might have run into Robin Williams, Robert Altman, Jacques Demy, Sven Nykvist, Peter O’Toole, Russ Meyer or Klaus Kinski. 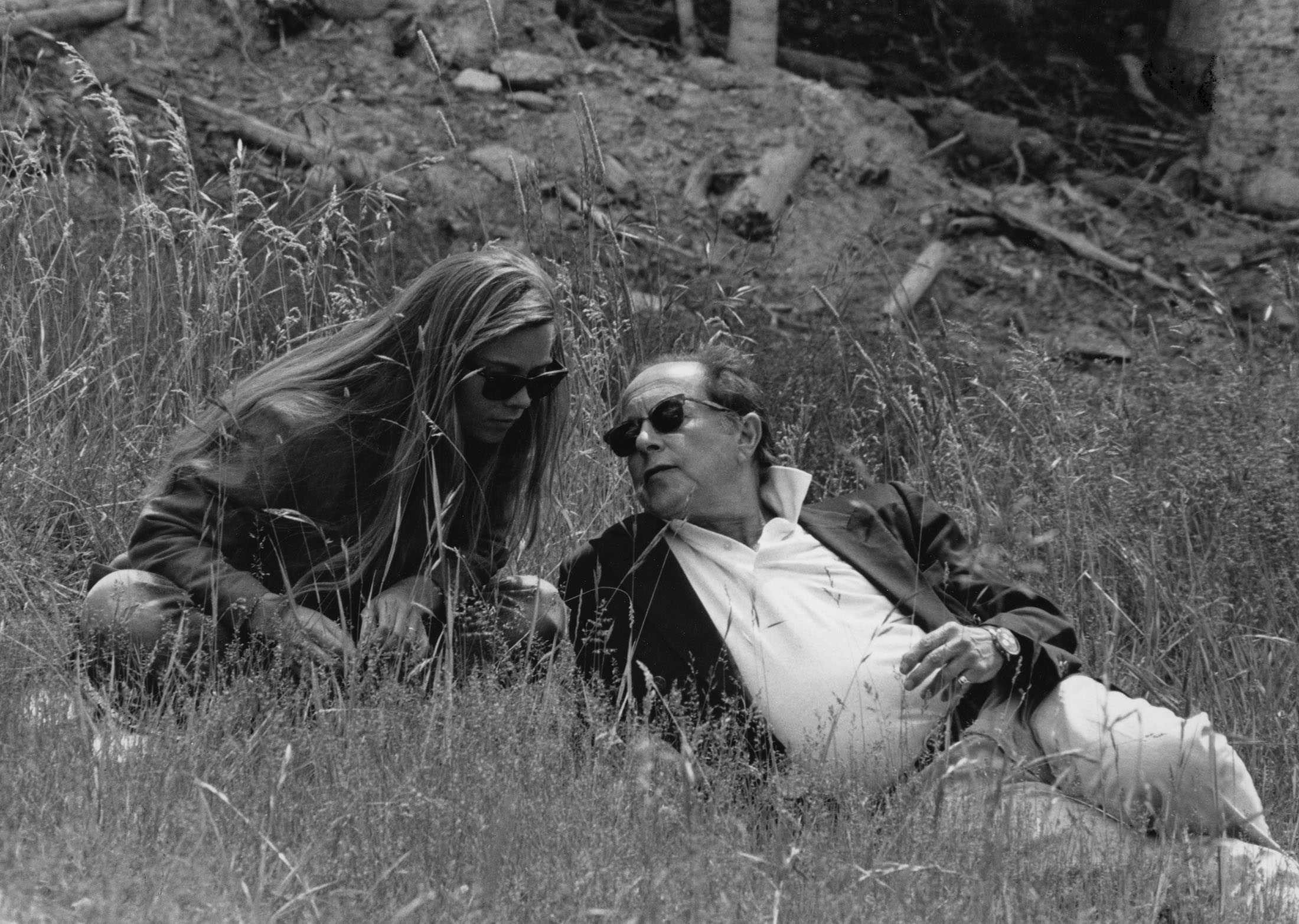 Theresa Russell and Nicolas Roeg at the 15th festival, 1985
In 1976, New York Times film critic Richard Eder wrote about the festival’s allure, noting that Bill Pence described Telluride “as a place where anyone can find Louis Malle or Francis Ford Coppola standing at a bar and talking about his work. True enough, but more to the point is that it is a place where people can go up to Mr. Malle and Mr. Coppola and tell them what they think of their work.” Eder further explained: “Intimacy has its disadvantages. Sometimes the movies themselves get blurred by the unexpected opportunities of seeing Werner Herzog, the German director, and Barbet Schroeder, the French director, playing table football.” 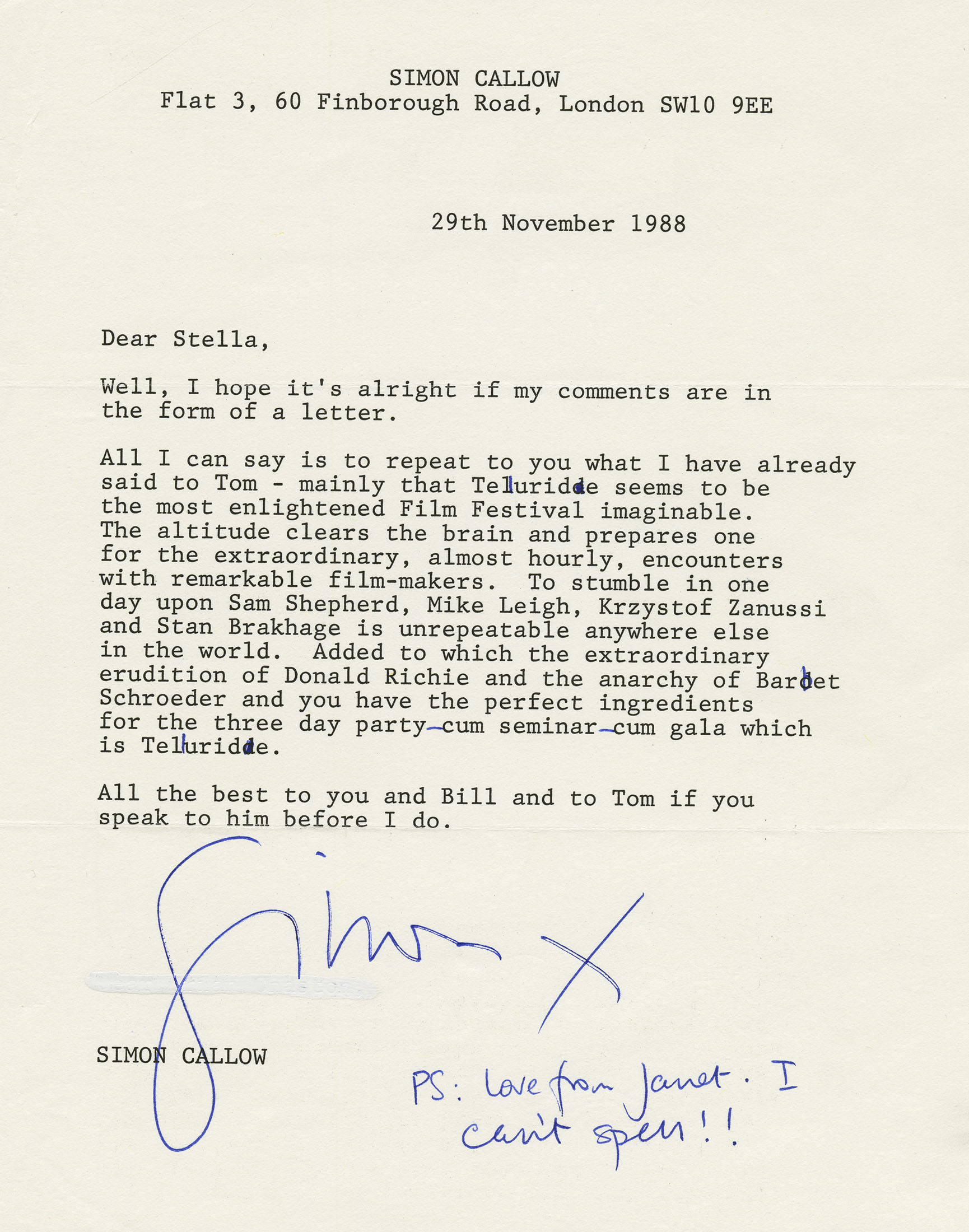 In a letter to the Pences, one attendee recalled many notable memories accumulated during 24 years of attending the festival, including “a smoke with Sterling Hayden from his infamous and ever present pipe (and a raspy story)” in 1978; “apres-dinner conversation with Abel Gance, who was enraptured by his female escorts” and “a beautiful walk and a serious conversation with Alain Tanner” in 1979; “a kiss and a hug from Margaret Hamilton” as well as a “curbside lecture from Volker Schlöndorff” during a power outage and “a delightful breakfast with Wally Shawn” the morning after the premiere of My Dinner with Andre, all in 1981; and last but not least, “arguing with Penn over the ending – or lack thereof – of Penn & Teller Get Killed” in 1989. 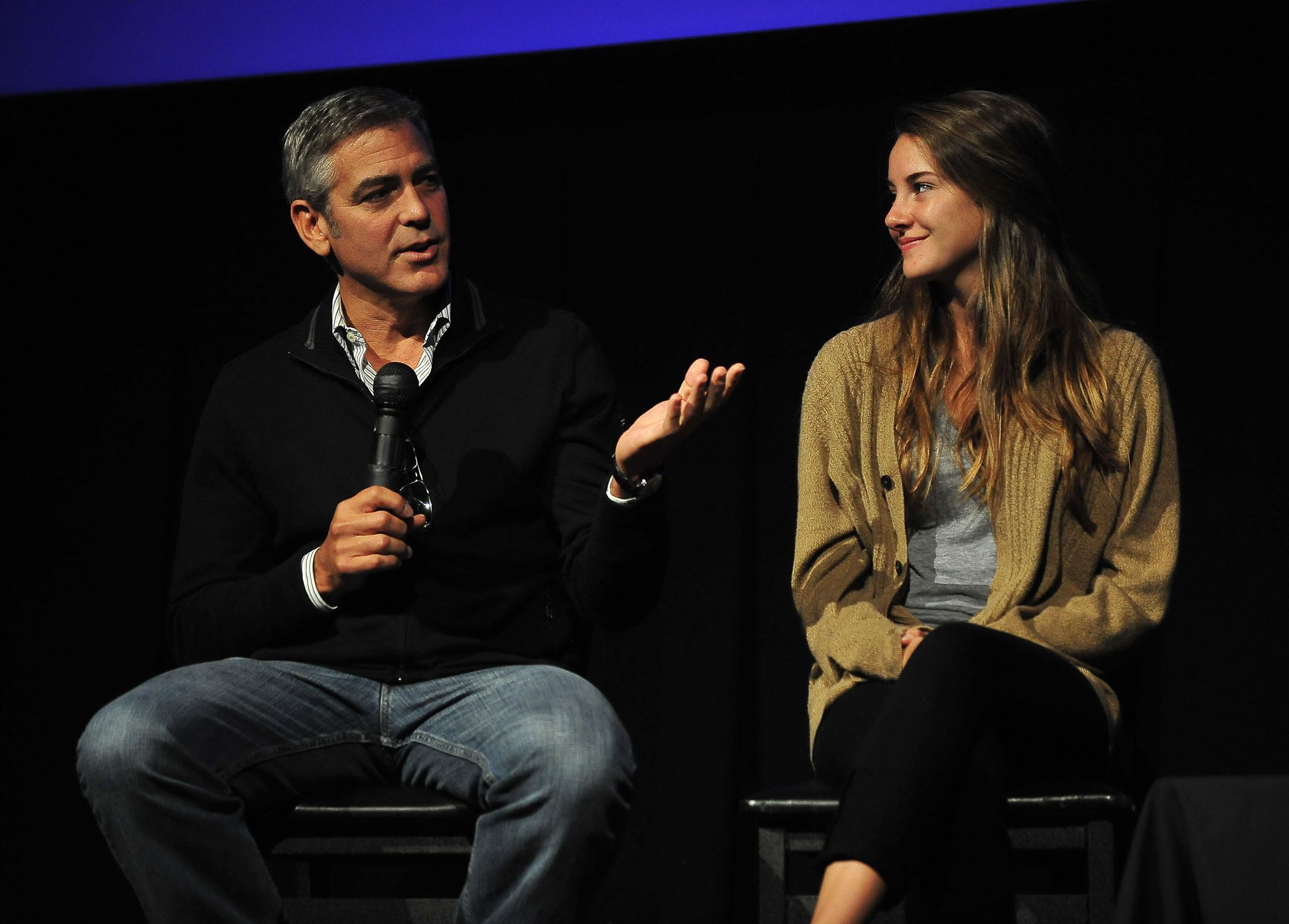 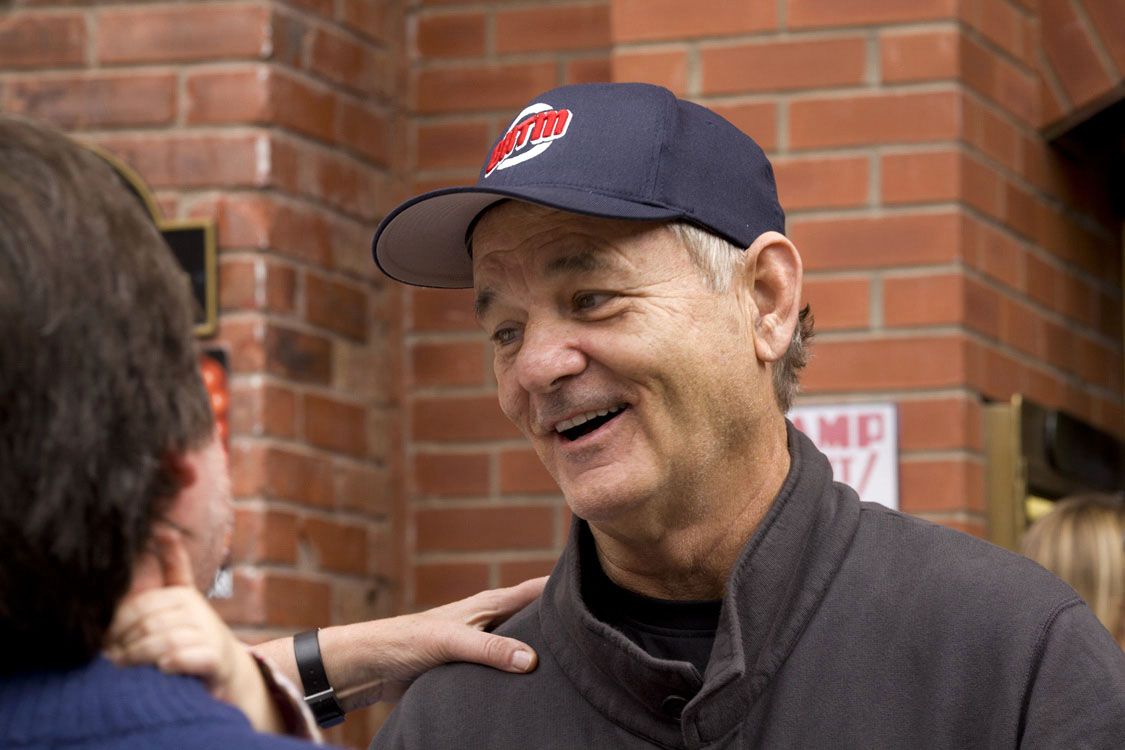 Bill Murray, 39th Telluride Film Festival, 2012
Ken Burns’s impressions of Telluride over the years, as recounted in “Telluride Thanksgiving,” an invocation he delivered at the festival’s 25th anniversary in 1998, were a similar montage of eclectic encounters: “a somnambulant Christopher Walken walking down the center of Colorado Avenue mumbling about the Battle of Shiloh;…porn star Nina Hartley (on the mound) in a softball game between the festival and the townies throwing to Werner Herzog on first with Peter Yarrow covering third; Shirley MacLaine trading life stories with a small group of new friends over wine in a bistro; Roger Ebert’s insightful questioning of everyone, from the tributees on the stage at the Sheridan to waiters listing tonight’s specials…; Lynne Littman, the director of Testament, sharing her own apocalyptic visions at the Sheridan bar at three in the morning.”

That diversity of taste was readily apparent a year earlier in1983, when the sharp words of two festival honorees attracted international attention. While accepting his tribute medallion, Russian director Andrei Tarkovsky (through interpreter and fellow filmmaker Krzysztof Zanussi) declared point-blank, “Cinema is not an entertainment. It is the highest poetical discipline of art.” The following night, actor Richard Widmark accepted his own medallion and countered by asserting that “film is a medium in which there’s room for everyone.” Pointing out that such classical American filmmakers as D. W. Griffith, John Ford, Orson Welles, Buster Keaton, Harold Lloyd and Charlie Chaplin were all “entertainers,” Widmark said, “The only thing there isn’t room for is pretentiousness and pomposity.” The applause that greeted this remark, according to film historian William K. Everson, was “deafening.”

Zanussi’s own opinion of the festival was revealed in a 1986 letter to the Pences: “I think without false modesty I may qualify myself as one of the most experienced film festival participants of my generation. For fifteen years I have been regularly to all major and most of the minor festivals in eastern and western Europe, in North and South America, in Africa, Asia and Australia. Most festivals are only useful…to promote my films….Some are pleasant but of minor importance….Telluride is really unique. I consider it very important and very enjoyable for any participant….I declare it my favorite festival of the world.” 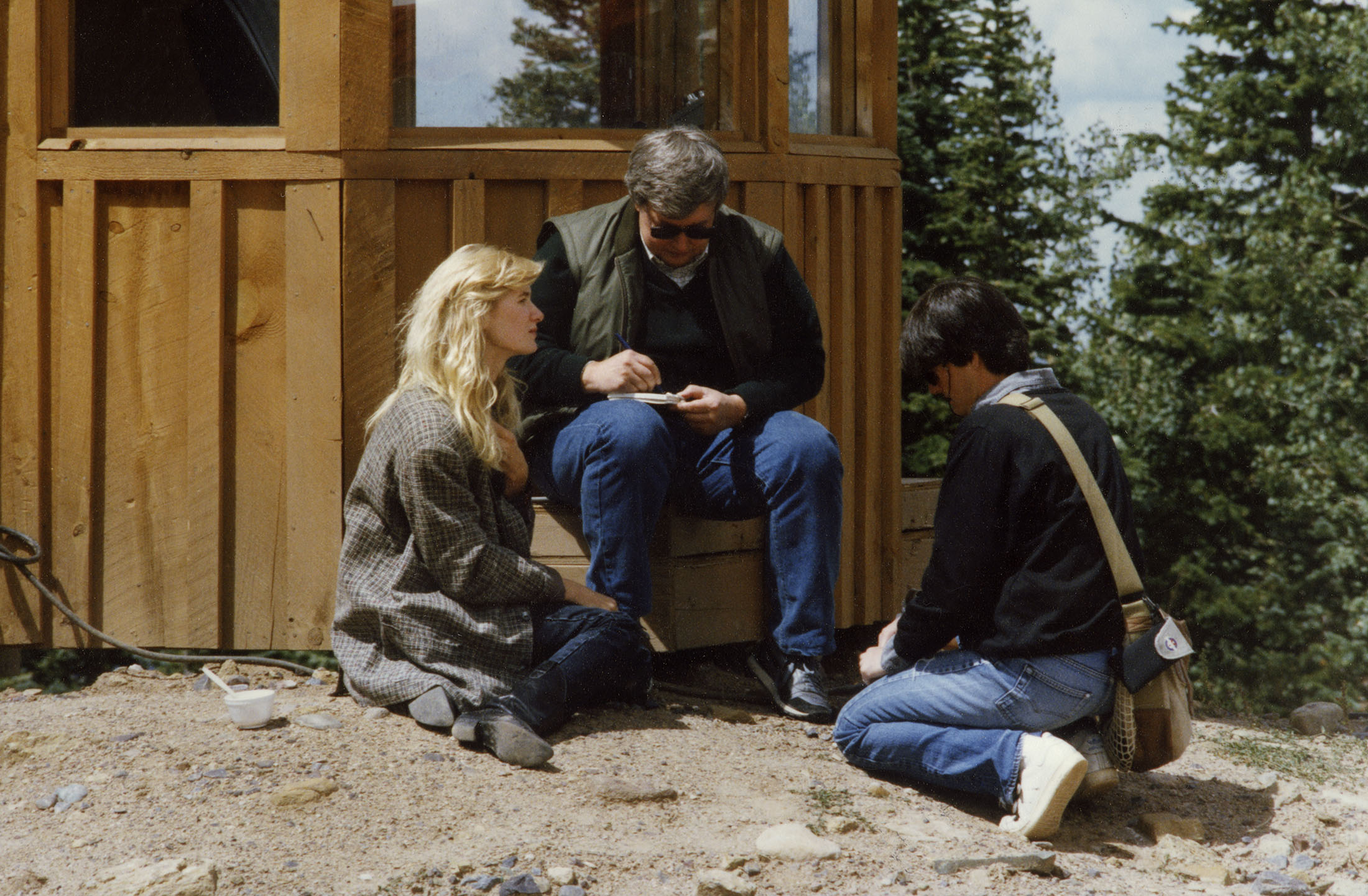 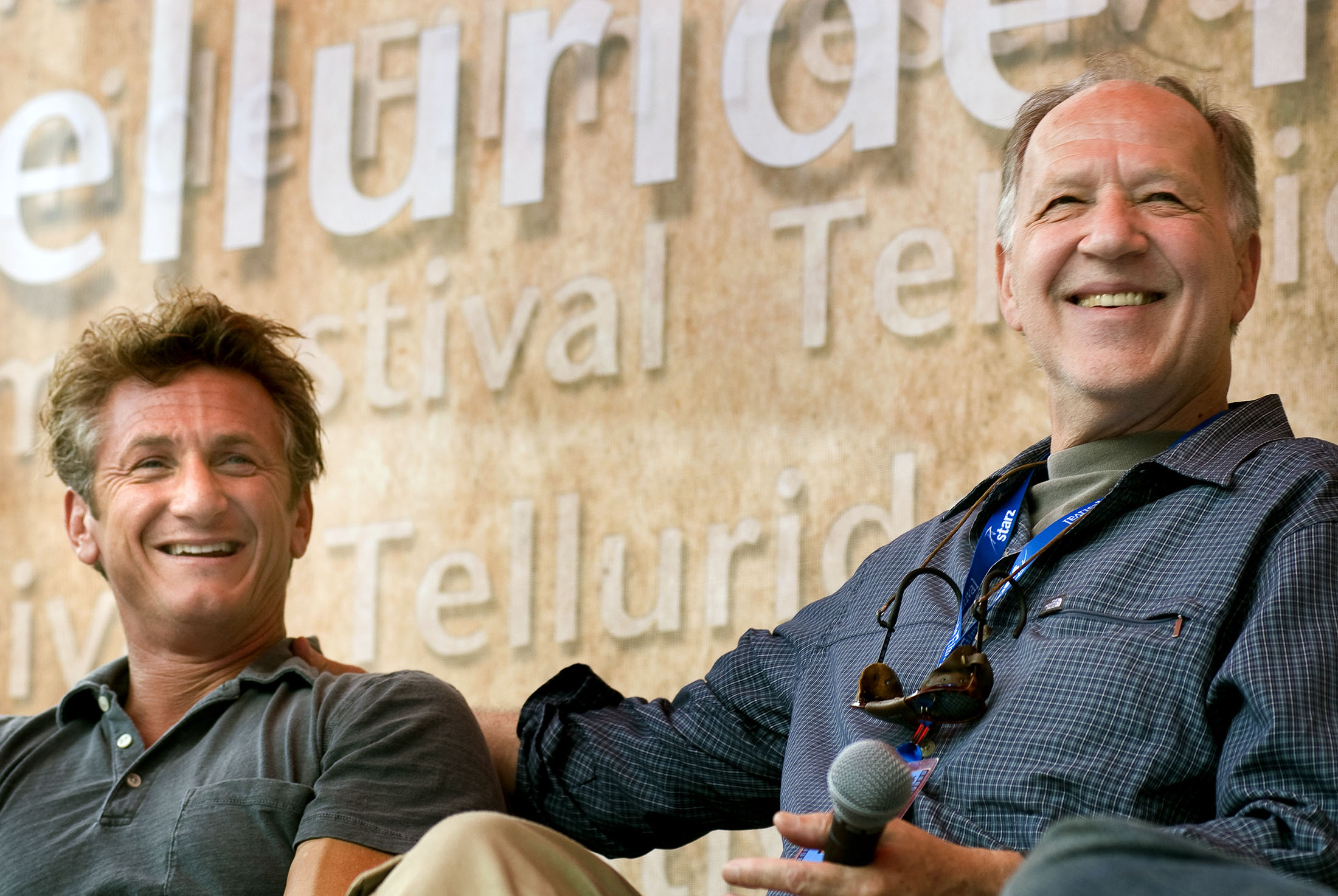 Another passionate devotee of the festival was animation director Chuck Jones. One of the many honorees who went on to become a frequent attendee, Jones even designed several of the festival posters. In his own tribute to the annual event and its challenging location, Jones called the Telluride Film Festival “the most fun you can have without breathing.” 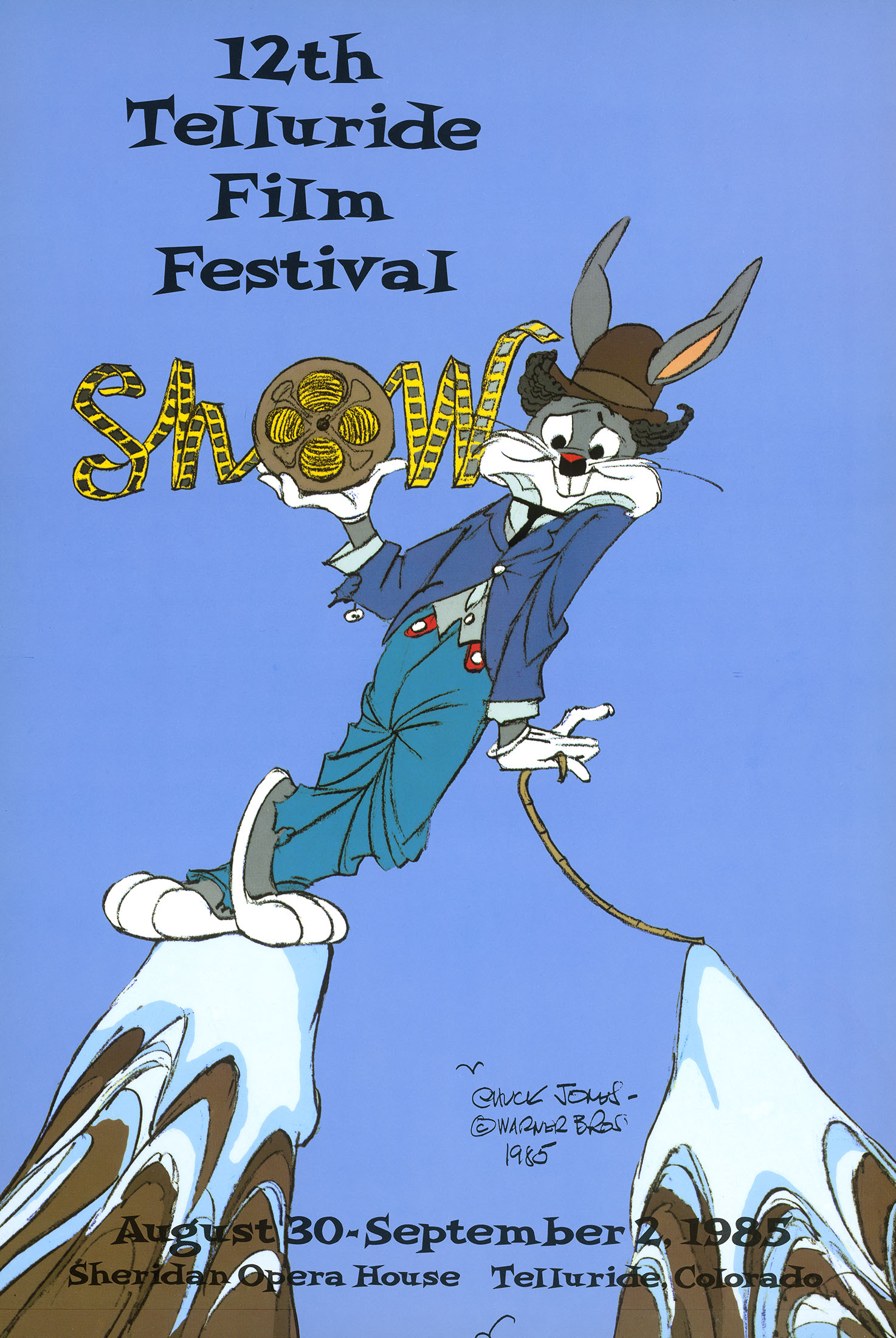 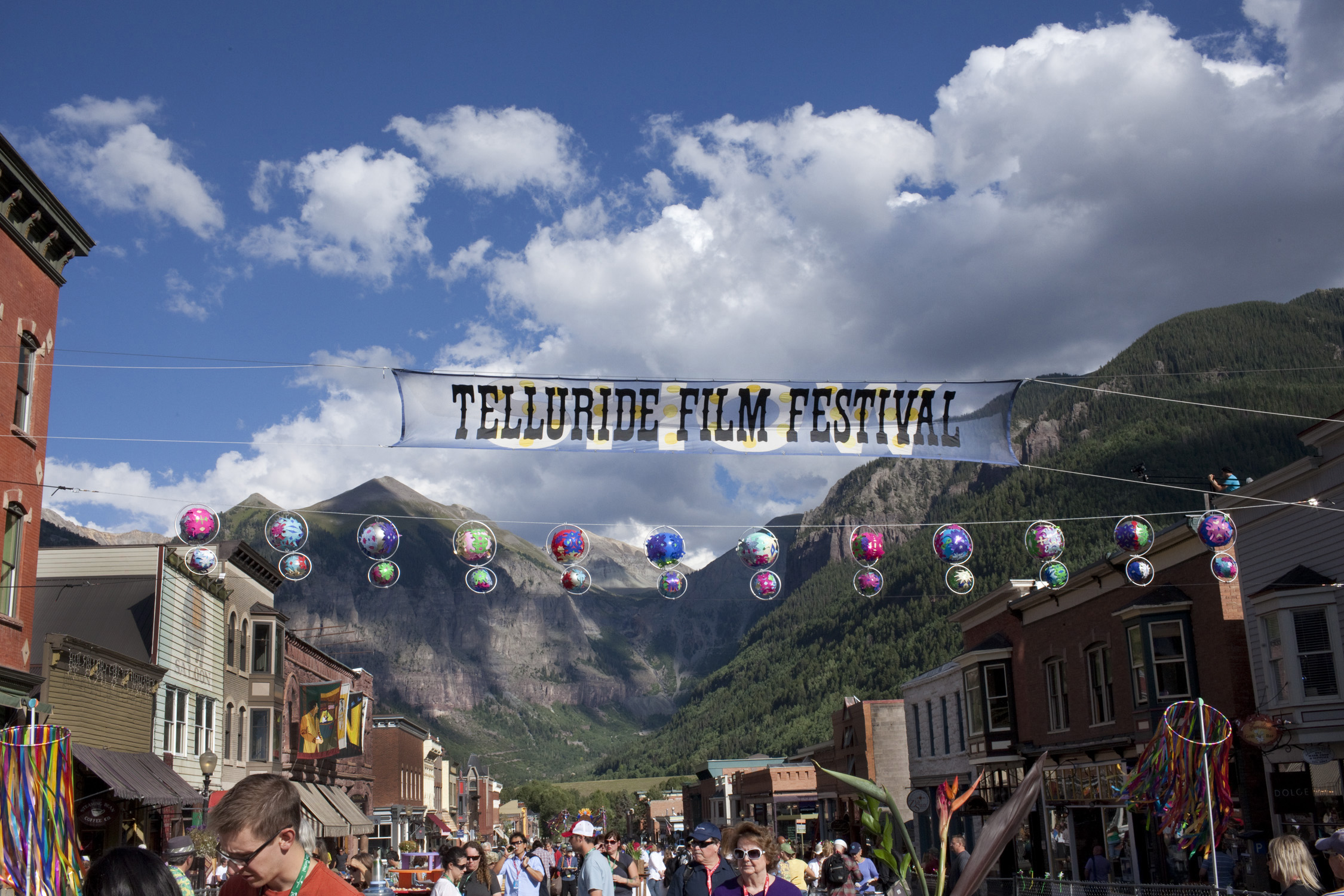 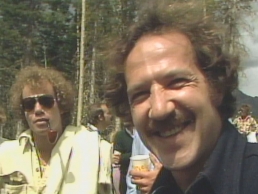