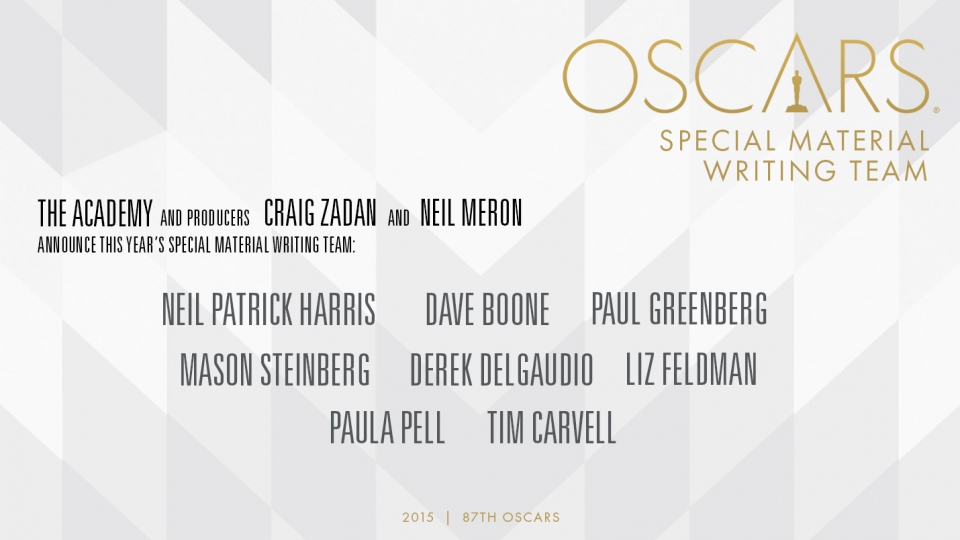 Writer and producer Paul Greenberg won an Emmy as a writer on the 63rd Tony Awards and earned three more nominations for his work on subsequent telecasts.  His other credits include “The Ellen DeGeneres Show,” the “Primetime Emmy Awards” and the “People’s Choice Awards.”  Greenberg also is a veteran sketch comedy performer and is currently writing, producing and acting in his own show, “International Ghost Investigators: Hollywood Division,” which airs on DirecTV’s Audience channel.

Mason Steinberg, a three-time Emmy Award nominee, has written material for some of biggest comics in the industry.  His television credits include the 84th Academy Awards show, the “Primetime Emmy Awards,” the “MTV Movie Awards” and series such as “Crank Yankers,” “The Andy Milonakis Show,” “Lopez Tonight,” “Stevie TV” and “The Crazy Ones.”

Derek DelGaudio is a performance artist, writer and co-founder, along with artist Glenn Kaino, of A.Bandit, an experimental performance art collective.  DelGaudio wrote and co-starred in “Nothing to Hide,” a theatrical magic show directed by Neil Patrick Harris that debuted at L.A.’s Geffen Playhouse in 2012 and Off-Broadway at the Signature Theatre in 2013.  DelGaudio was selected as an artist-in-residence at Walt Disney Imagineering earlier this year.  He is currently writing a new theater show to debut in 2015.

Liz Feldman is a four-time Emmy winner for her work as a writer and producer on “The Ellen DeGeneres Show.”  Feldman wrote material for the 79th and 86th Academy Awards telecasts and was a writer and producer on the comedy series “2 Broke Girls.”  She is the creator of the new comedy series “One Big Happy,” which she is also writing and executive producing for a 2015 launch.

Paula Pell is a comedy writer, producer and actress, best known for her writing work on “Saturday Night Live” for two decades.  The SNL characters she helped create include Debbie Downer, the Spartan Cheerleaders, and Marty and Bobbi.  A few years ago, Pell began writing for feature films, and in 2012 she executive produced Judd Apatow’s “This Is 40.”  Her first original screenplay, “The Nest,” was shot this summer with Amy Poehler and Tina Fey.  The film is due out next year.

Tim Carvell is a writer and executive producer on the series “Last Week Tonight with John Oliver.”  A veteran of three previous Oscar telecasts, Carvell also served for 10 years as a staff writer and head writer on “The Daily Show with Jon Stewart,” during which time he won six Emmy Awards for his work.  Carvell is the author of the Planet Tad middle-grade book series, based on his column for MAD magazine.