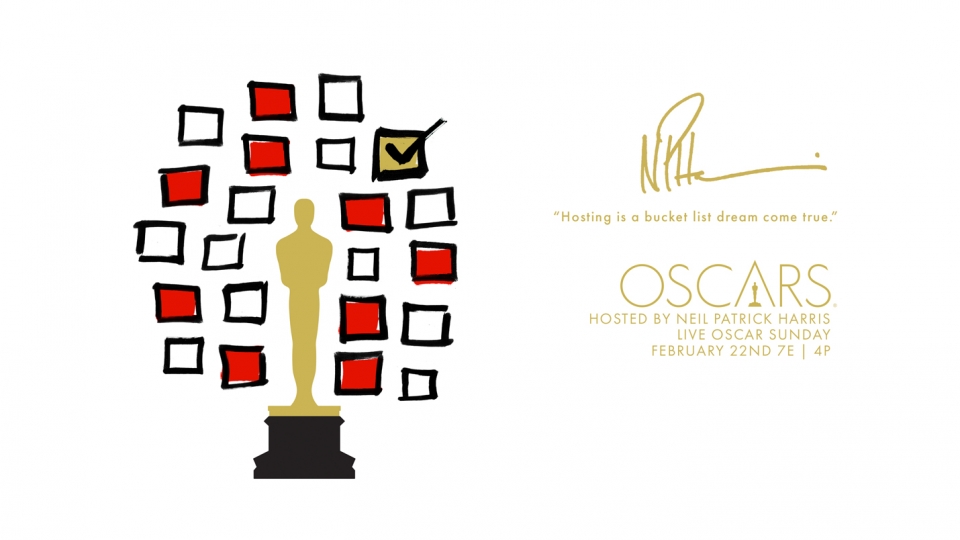 Award-winning star of stage and screen Neil Patrick Harris will host the 87th Oscars®, show producers Craig Zadan and Neil Meron announced today.  This will be Harris’ first time hosting the ceremony.   The show will air live on ABC on Oscar® Sunday, February 22, 2015.

"We are thrilled to have Neil host the Oscars," said Zadan and Meron. "We have known him his entire adult life, and we have watched him explode as a great performer in feature films, television and stage.  To work with him on the Oscars is the perfect storm, all of his resources and talent coming together on a global stage."

“It is truly an honor and a thrill to be asked to host this year’s Academy Awards.  I grew up watching the Oscars and was always in such awe of some of the greats who hosted the show,” said Harris. “To be asked to follow in the footsteps of Johnny Carson, Billy Crystal, Ellen DeGeneres, and everyone else who had the great fortune of hosting is a bucket list dream come true.”

“We share Craig and Neil’s excitement in welcoming the incredibly talented Neil Patrick Harris,” said Cheryl Boone Isaacs, Academy President.  “He is the consummate entertainer.  Neil’s distinctive charm and showmanship make him the ideal host to honor the Oscar legacy and ensure we all enjoy another unforgettable celebration.”

“Neil is a terrific actor, singer, risk-taker and collaborator,” said Dawn Hudson, Academy CEO. “We can't wait to see the show that he and Craig and Neil create together.”

“Neil Patrick Harris is highly energetic and a definitive entertainer,” said Paul Lee. “We are thrilled to have him as our 2015 Oscar host.”

A triple-threat performer, Harris has enjoyed a successful career in entertainment.  He can currently be seen starring opposite Ben Affleck and Rosamund Pike in David Fincher’s critically-acclaimed feature film, “Gone Girl.”  Harris garnered multiple Emmy® and Golden Globe award nominations for his role as Barney Stinson on the hit television series, “How I Met Your Mother,” and he won an Emmy for his guest-starring role on “Glee” in 2010.  He also recently starred in the title role of “Hedwig and the Angry Inch” on Broadway, earning the 2014 Tony Award for Best Actor in a Musical.  Harris served as host of the 61st and 65th Primetime Emmy Awards, as well as the 63rd, 65th, 66th and 67th Tony Awards, for which he won four Emmys.  Most recently, Harris added the title of author to his list of accomplishments with the release of his autobiography from Crown Publishing, “Neil Patrick Harris: Choose Your Own Autobiography.”

The last two Oscars telecasts, which were produced by Zadan and Meron, received a major spike in the ratings.  The 86th Oscars was TV’s most-watched entertainment event in 10 years and attracted the biggest viewership since 2000, with more than 45 million viewers.  The show resulted in dramatic gains in younger demos and social media conversation, with more than one billion impressions generated on Twitter and 25 million interactions happening on Facebook on Oscar Sunday.  Additionally, the star-studded “selfie” became the most retweeted photo of all time with 32.8 million views.