Home / News / Myth-making: STAR WARS and the Art of Advertising

Myth-making: STAR WARS and the Art of Advertising 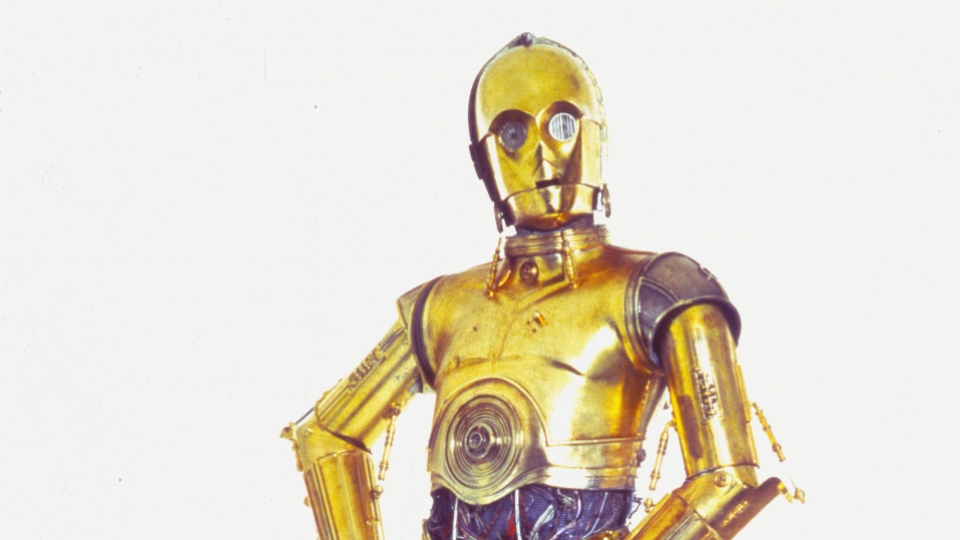 Today words and names like “wookiee,” “Jedi,” “Darth Vader” and Millennium Falcon are recognized in virtually every household, so it takes a little bit of imagination to return to that time orbiting May 1977 when the very first Star Wars film arrived in theaters. How was this new mythology and world of unknown creatures and concepts originally translated and advertised? Travel back with some of the artifacts and images from the first film in the franchise, housed in the Core Collection Reference Files at the Academy of Motion Picture Arts and Sciences’ Margaret Herrick Library. 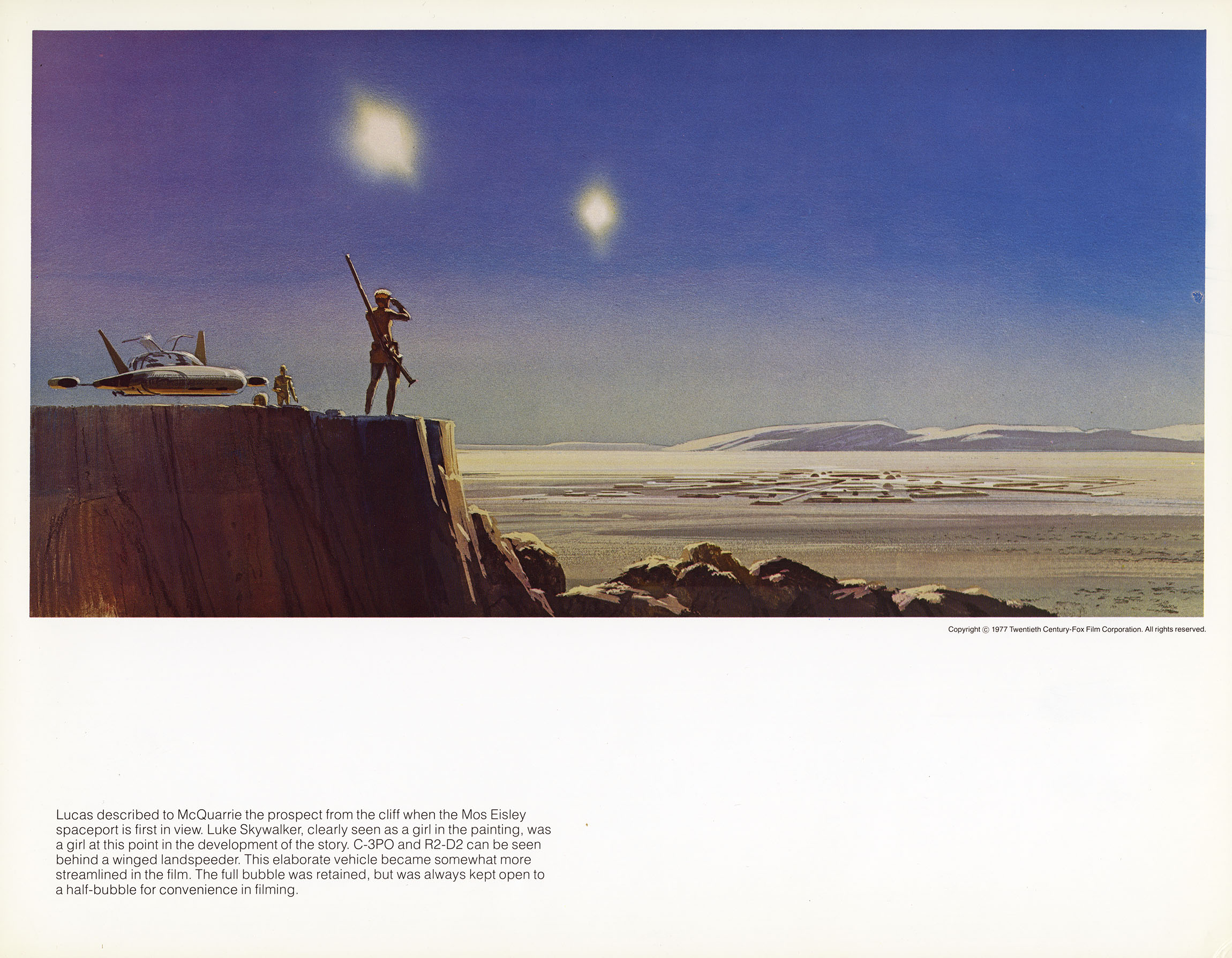 Director George Lucas hired illustrator Ralph McQuarrie to create the conceptual art that would bring the Star Wars universe to life in the film’s preproduction phase. Here McQuarrie originally portrayed the character who would become known as Luke Skywalker as a woman, circa 1975.

Another preproduction painting by McQuarrie depicts the droid duo R2-D2 and C-3PO, utilizing a design aesthetic that evokes Metropolis (1927) more than Star Wars. 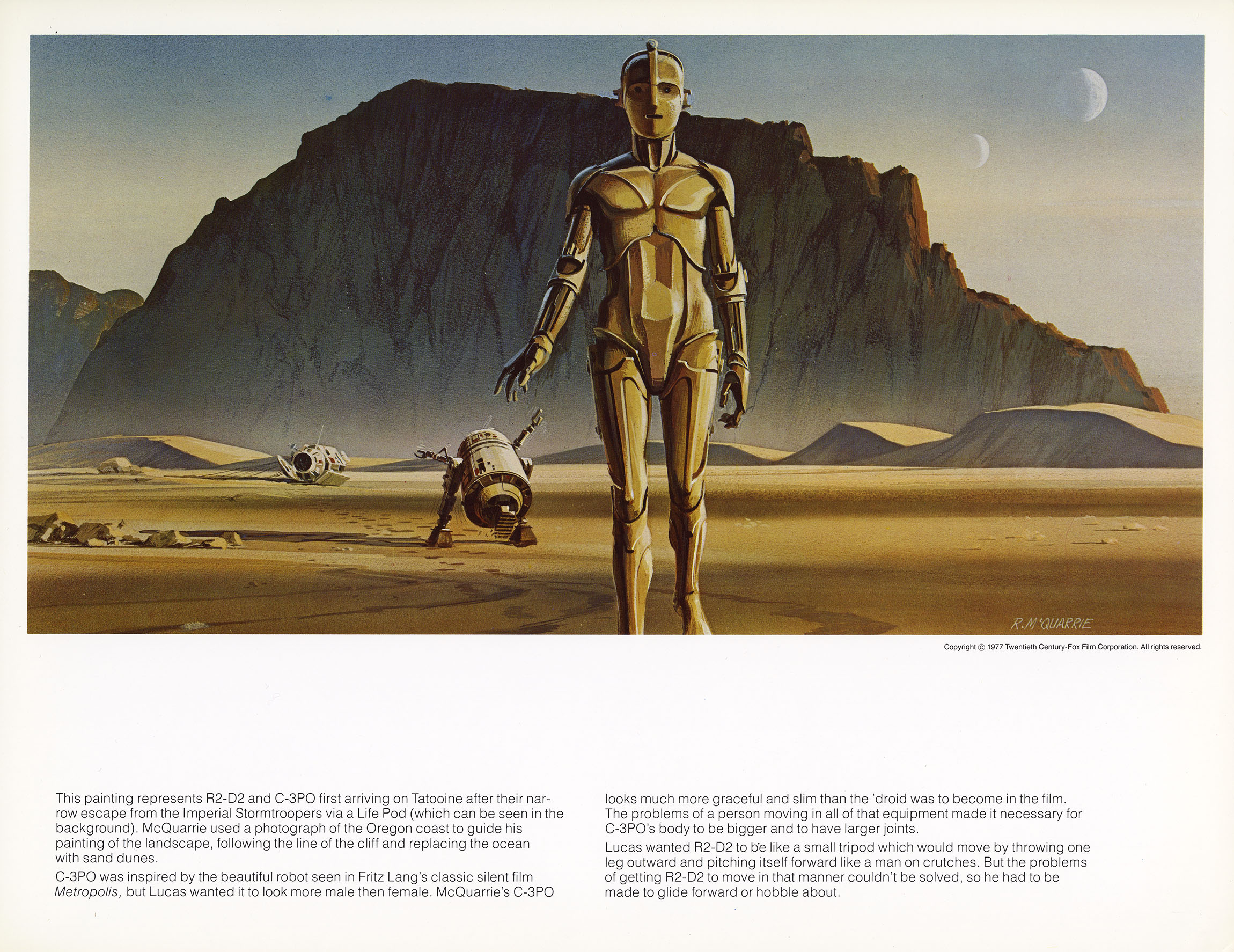 This third sample of McQuarrie’s work visualizes a confrontation between Luke Skywalker and Darth Vader that was never realized in the film. 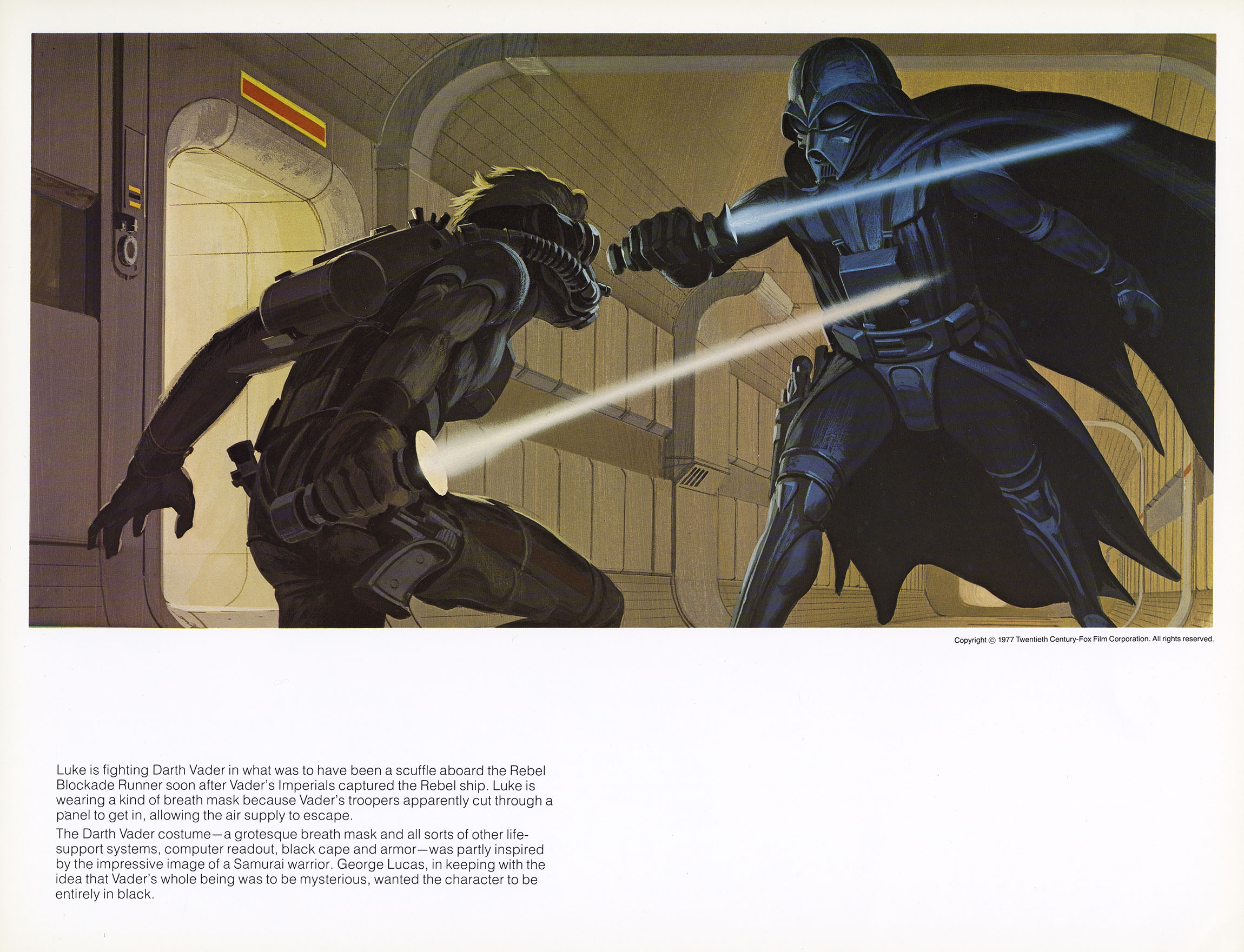 This 1977 Italian poster featured on a trading card reveals how international marketing offered differing interpretations of some of the main characters. 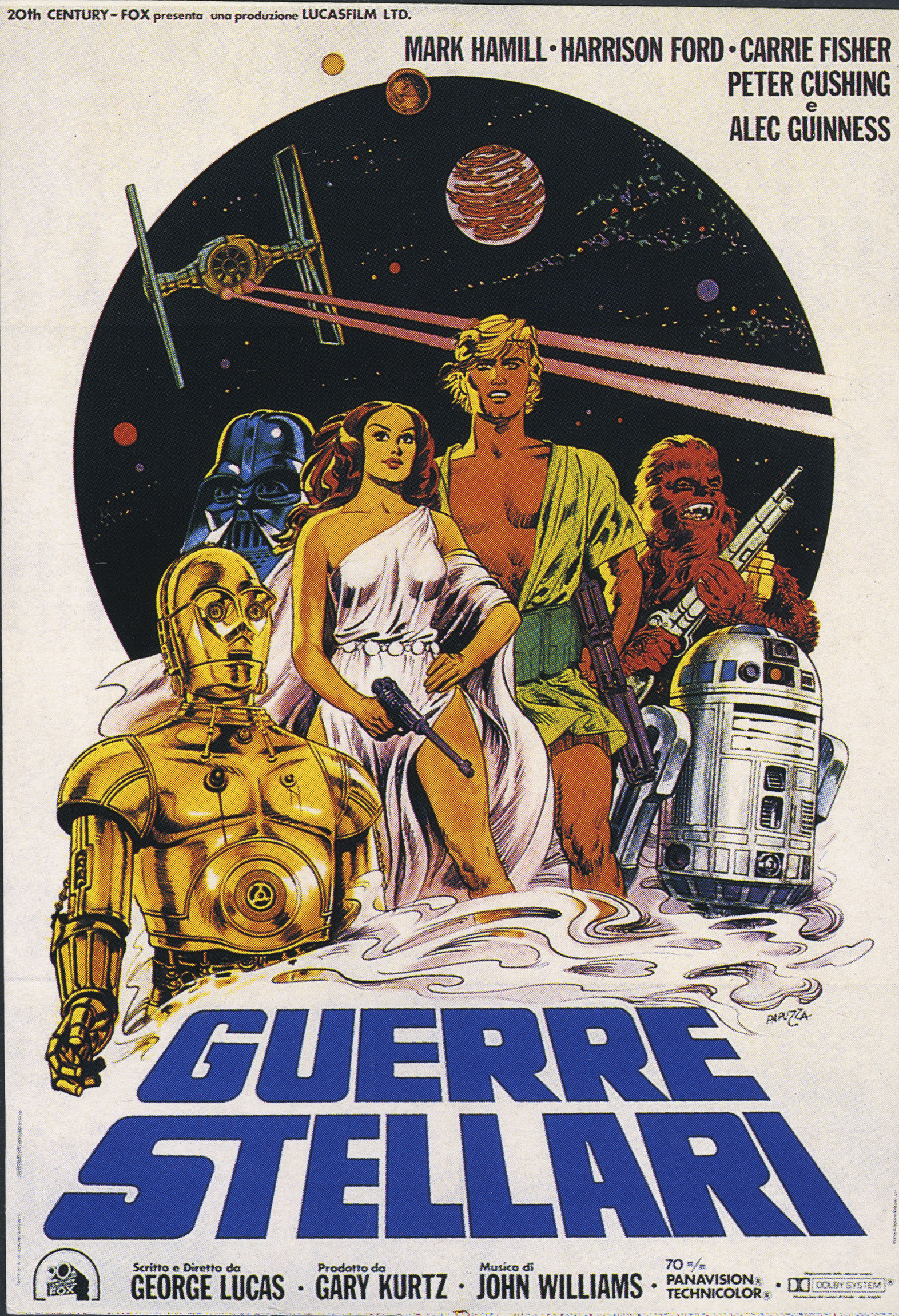 This Polish poster printed on a greeting card is built around a depiction of the droid C-3PO. 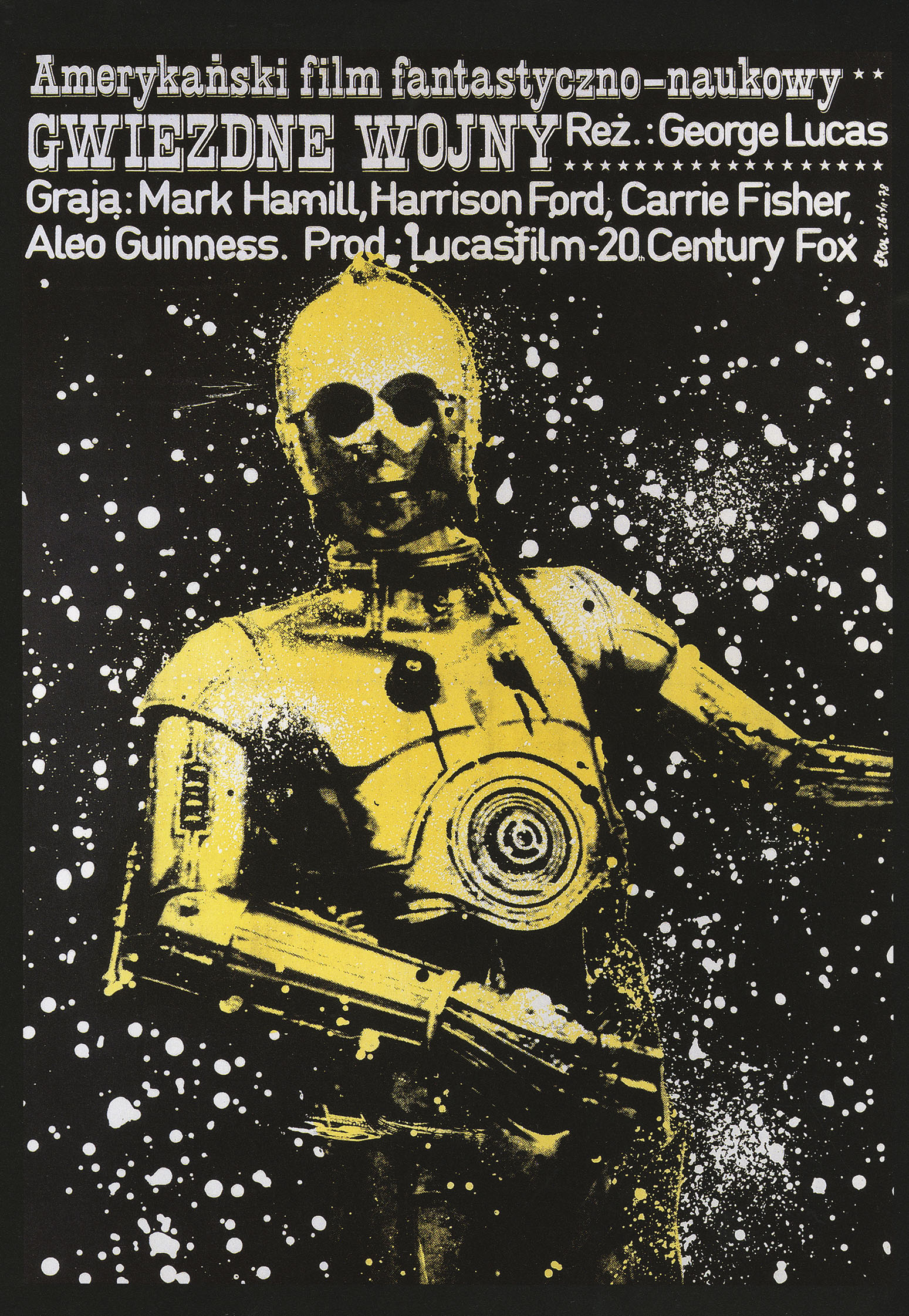 This pressbook contains a number of different-sized posters and ads for exhibitors and theater owners to choose from for display. 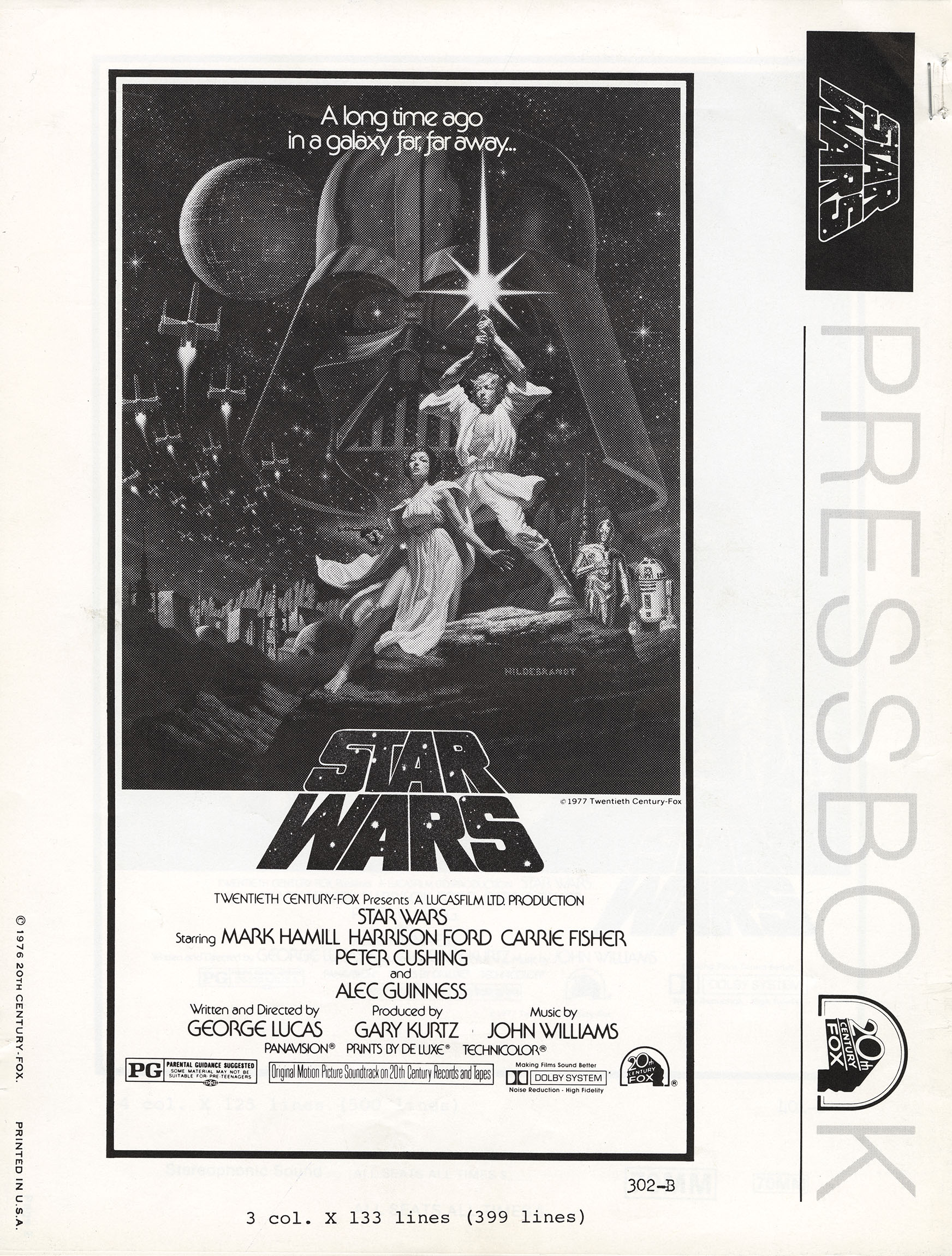 One of the unique artifacts contained in this collection is a cereal box from the year of the film’s release. 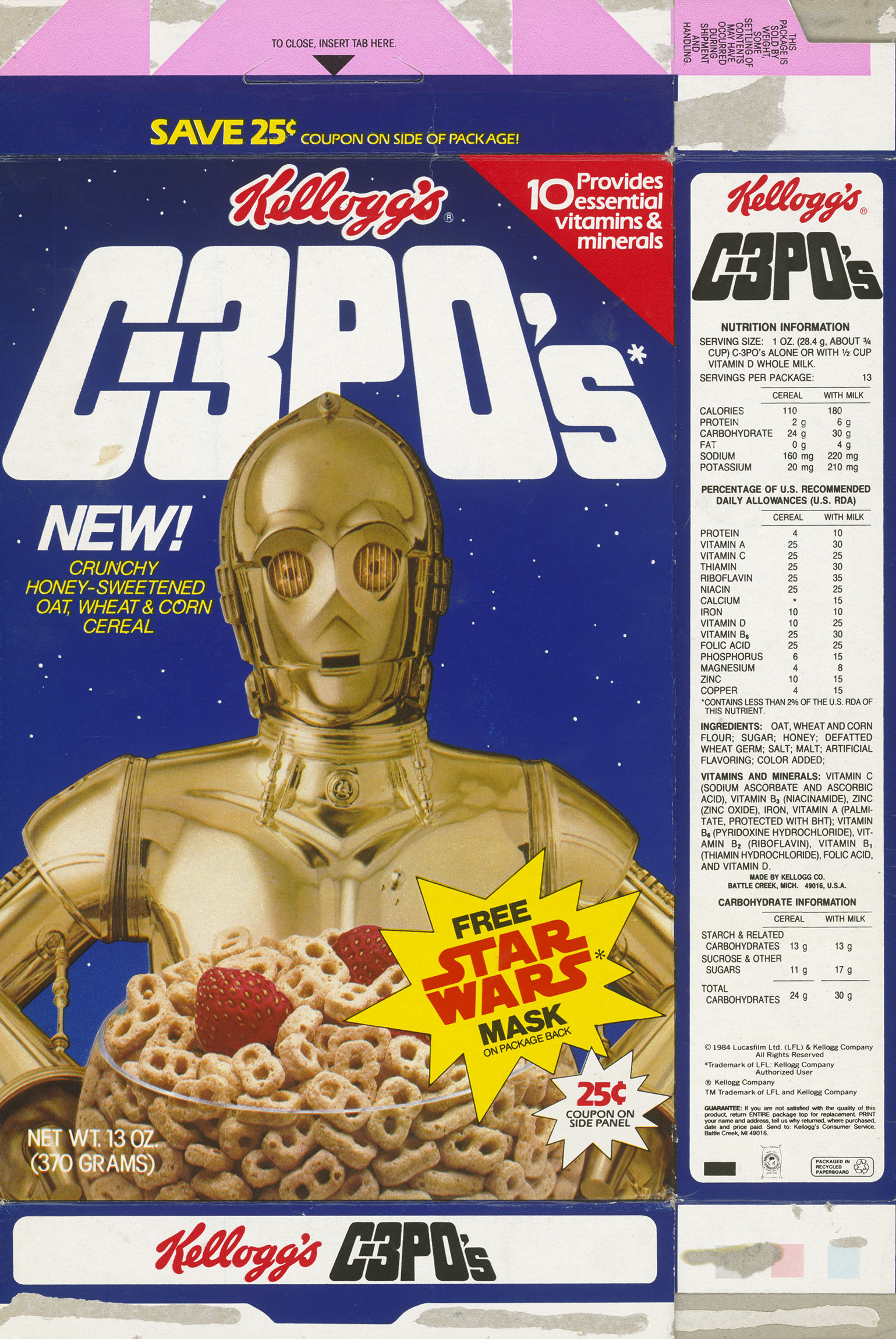 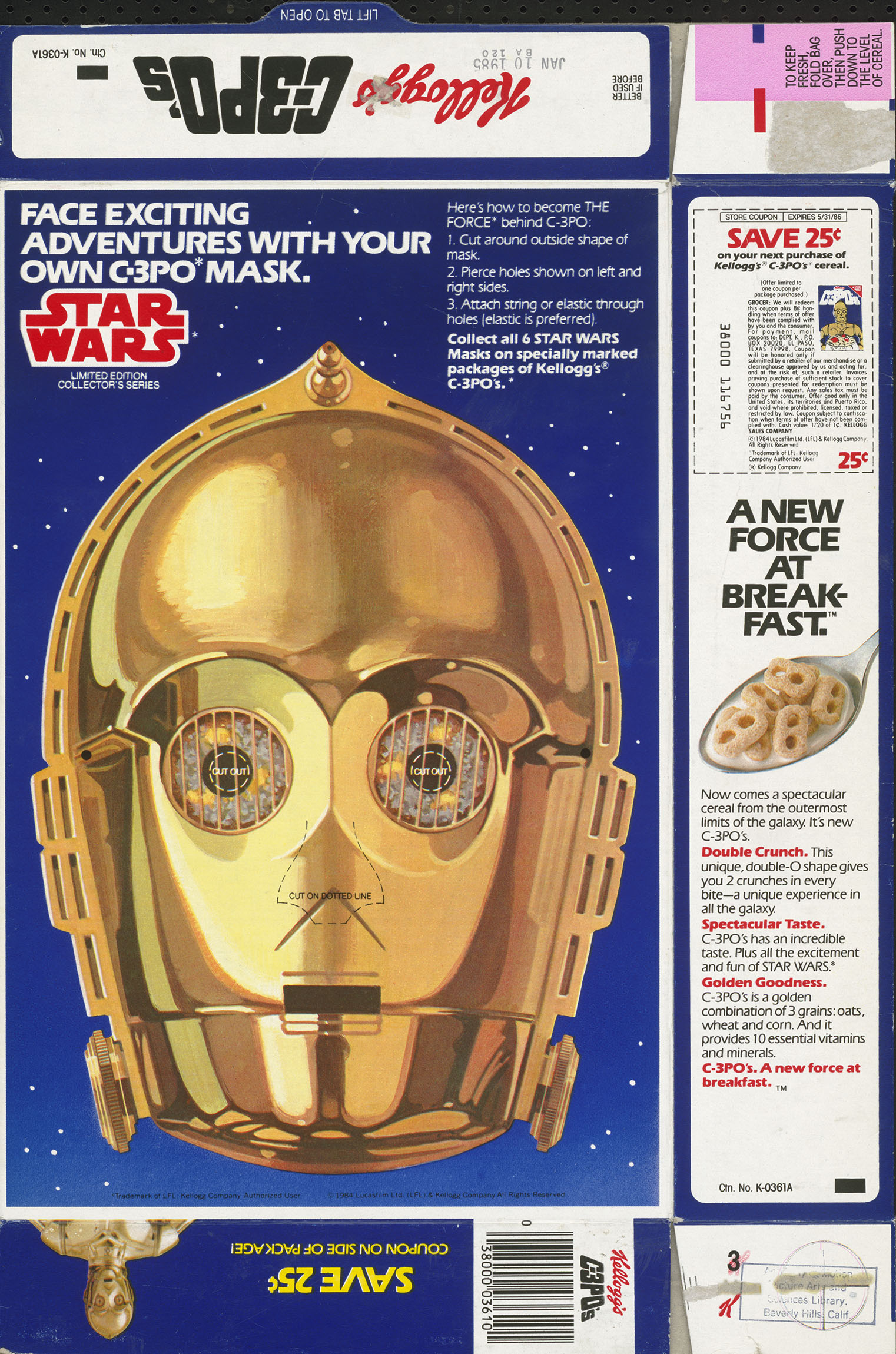 A program cover from the film’s release, with the iconic graphic design of the Star Wars logo prominently displayed. The program was available for sale in theater lobbies. 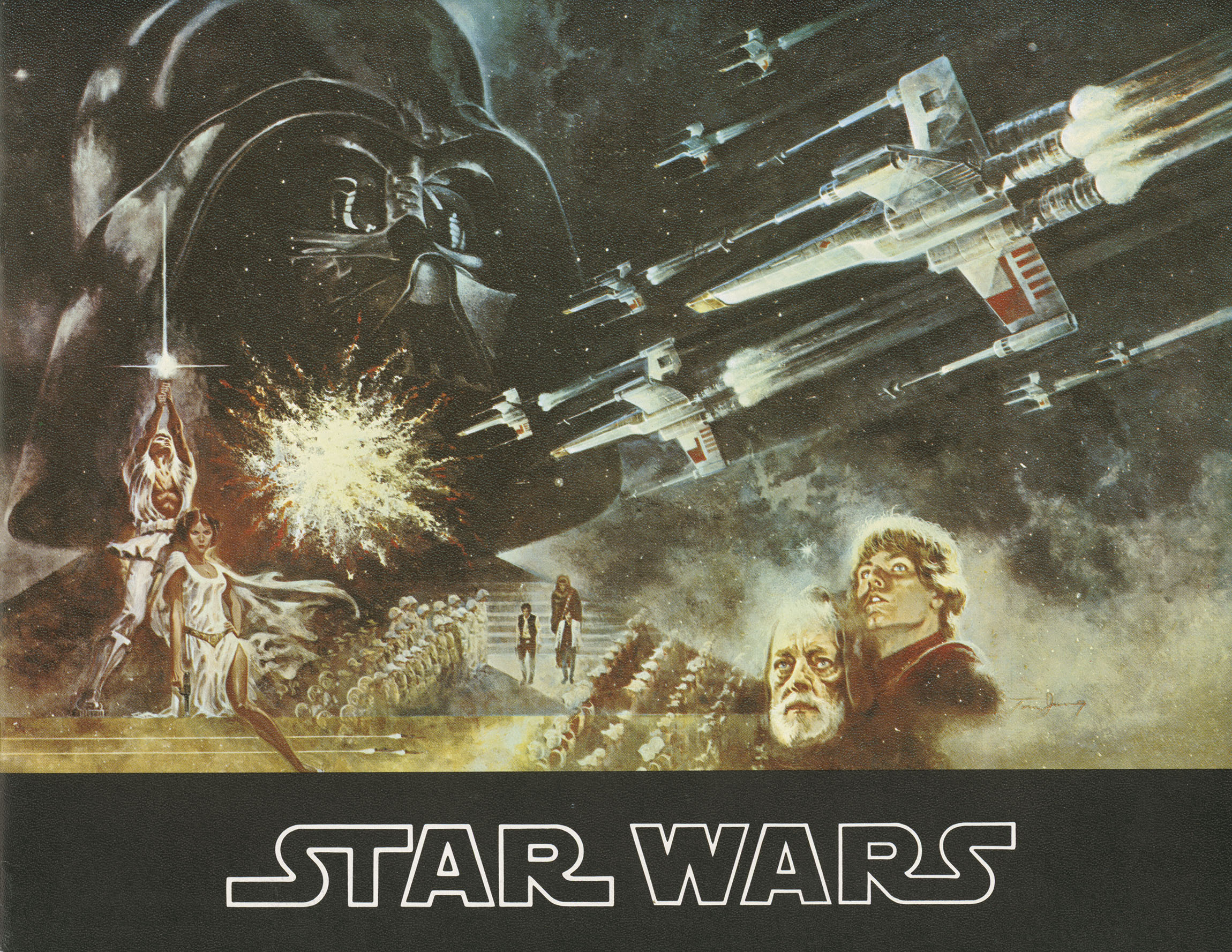 The cover of this rare pre-release program reveals a slightly different graphic design for the letter “W” in the Star Wars logo. 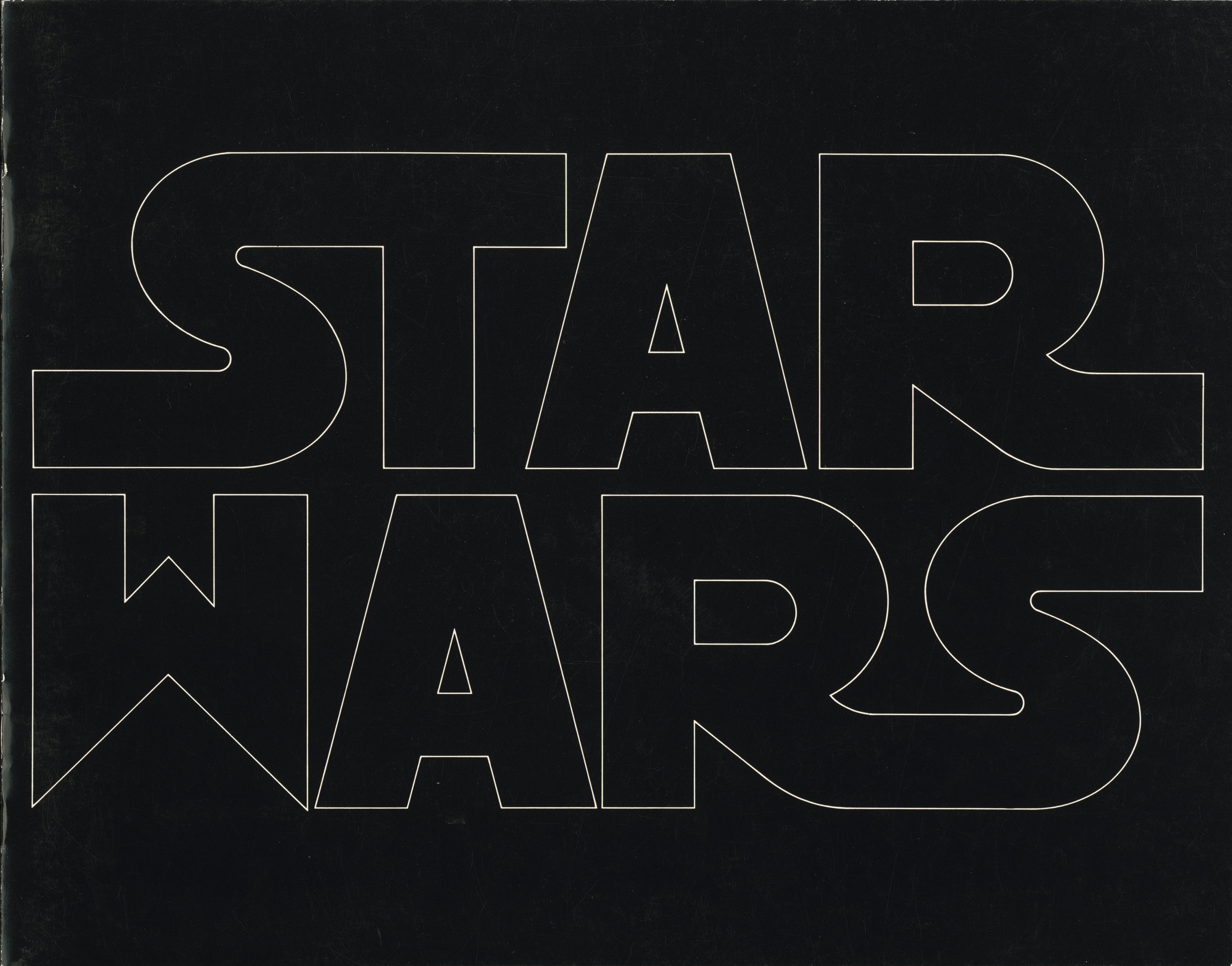 These pages of the original Star Wars program offer an early explanation and definition of the new species and creatures that would populate George Lucas’s galaxy. 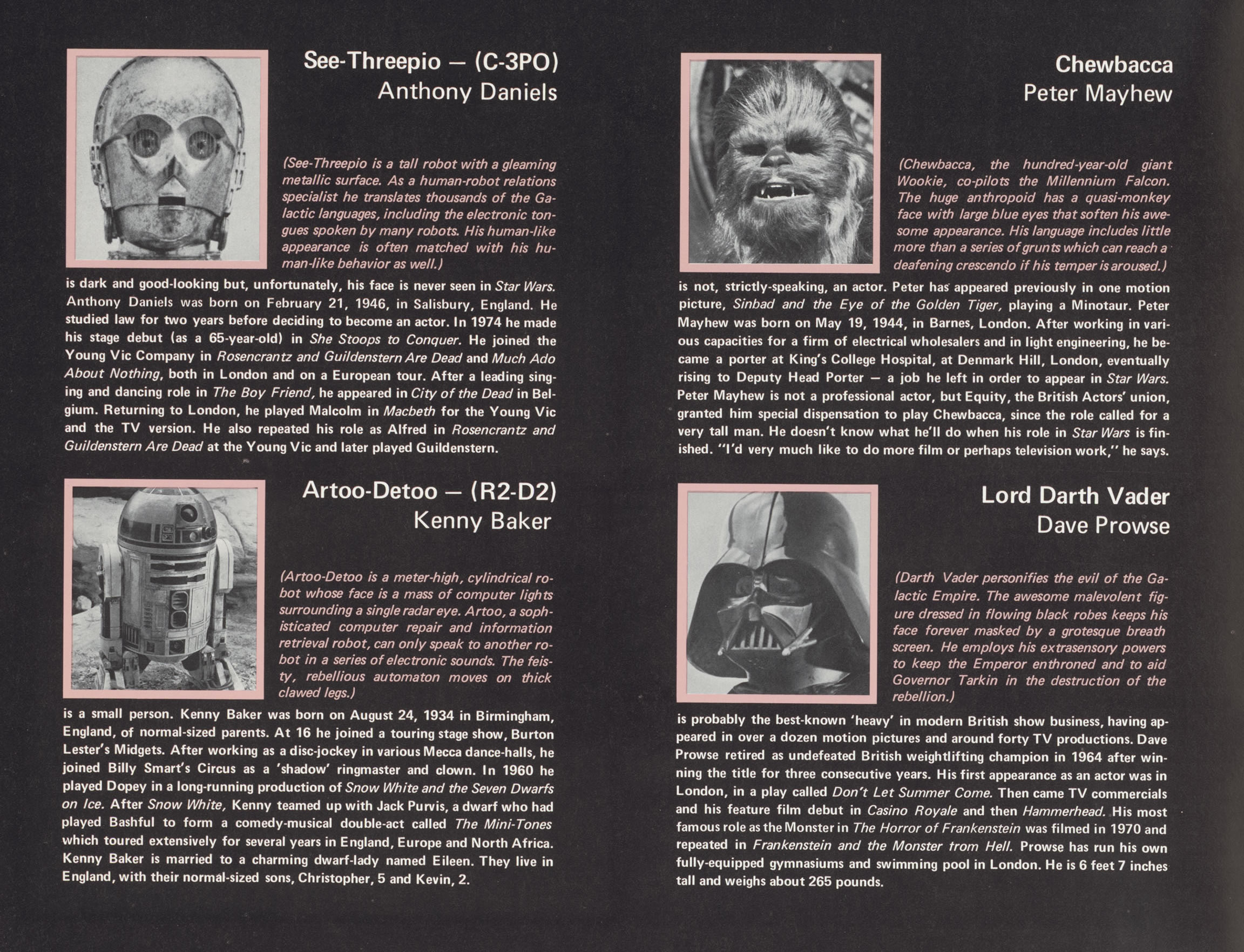 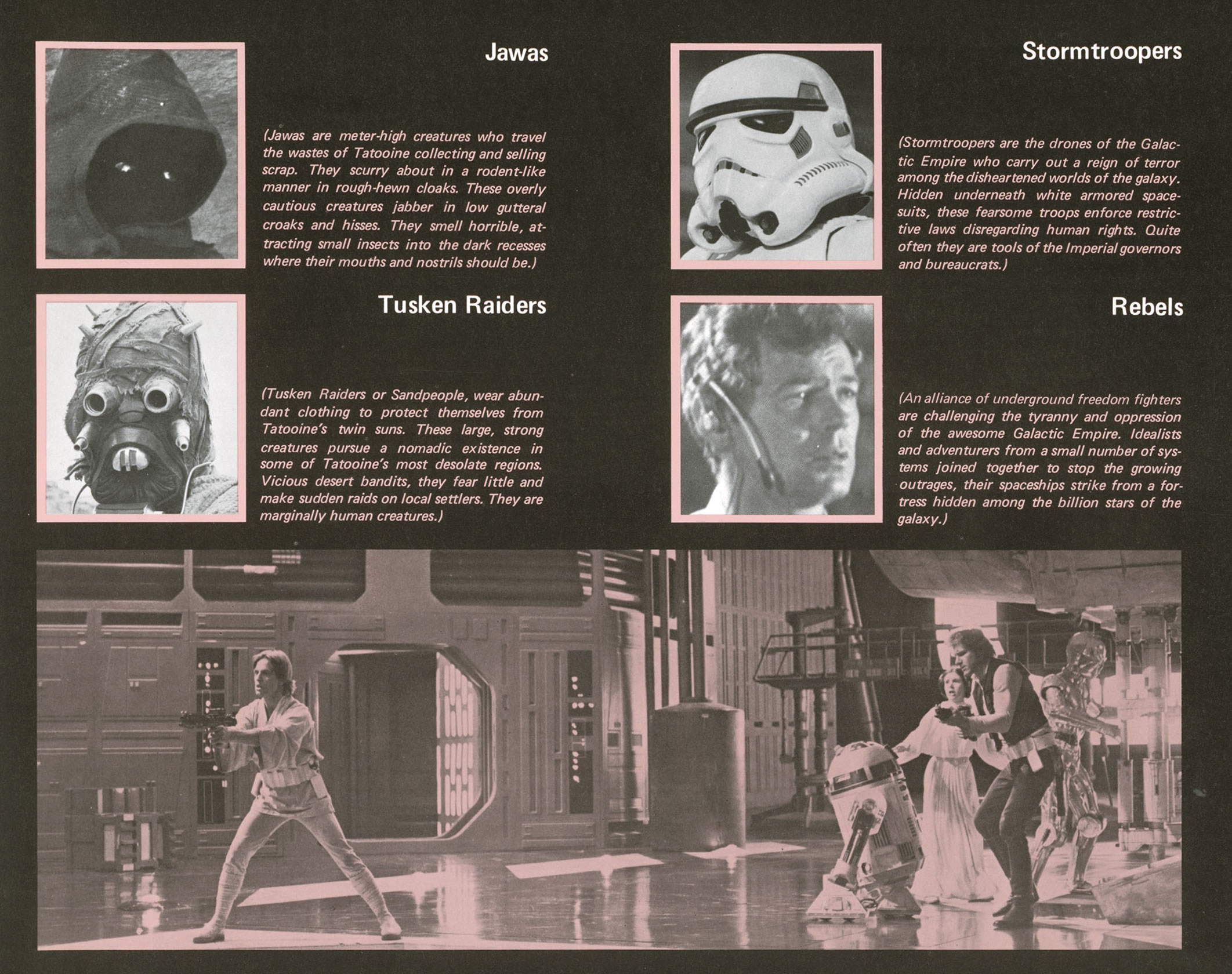 In a world before VCRs were commonplace, and long before rental stores, DVDs and online streaming, theatrical re-releases were quite common for popular films. Here an ad announces the return of Star Wars to theaters after its initial run and even advertises a tease for the upcoming sequel. Star Wars was re-released for the first time in July 1978, by which time it had received seven Academy Awards. 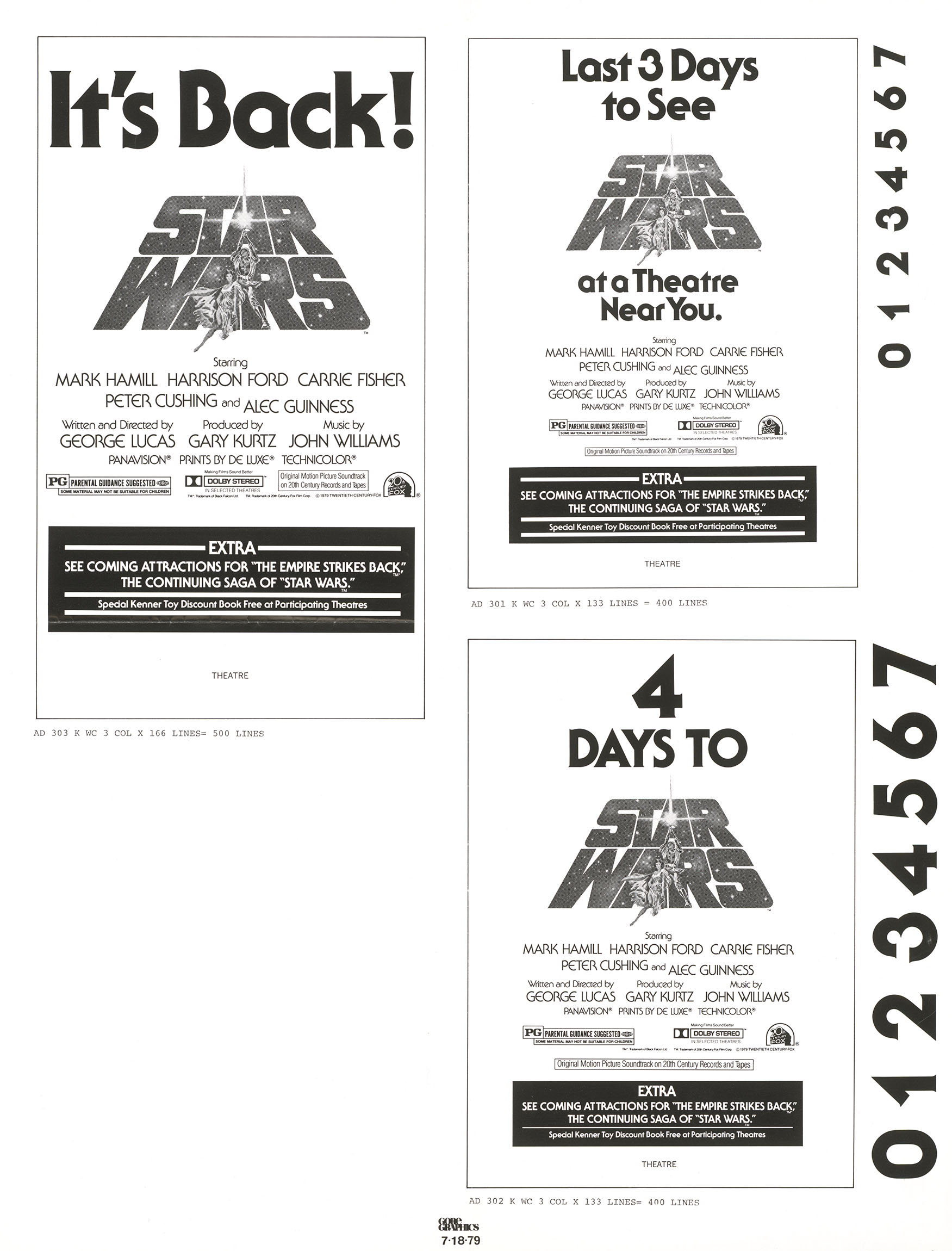 Star Wars has come a long way from those early days of marketing that had to define and outline the world in which it was set. Future Star Wars films would build upon this foundation of myth-making and propel the franchise to become one of the most recognizable in the history of the medium.