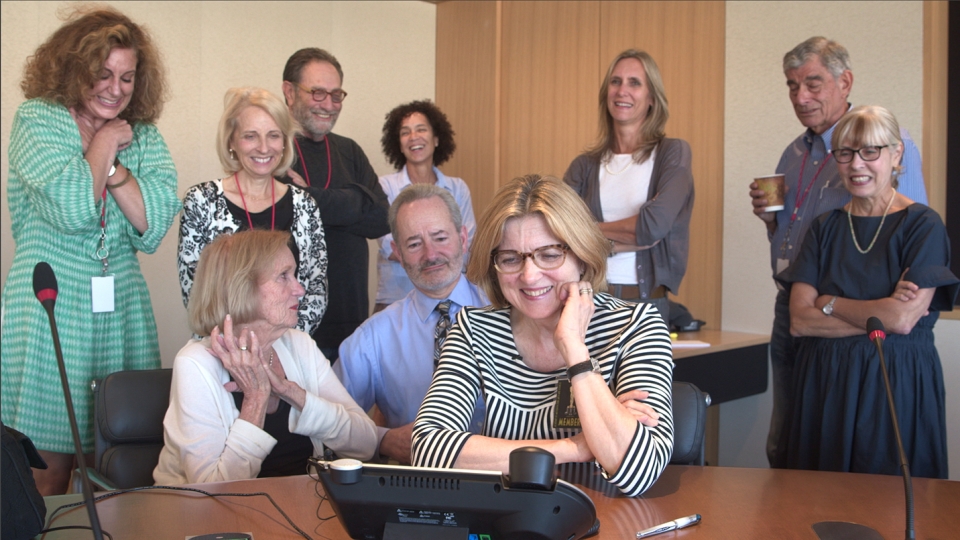 An all-star group of Hollywood moviemakers huddled around a speakerphone in the Academy’s headquarters on an impossibly sunny day, poised to change the lives of several people around the world.

"Is this Sallie?,” asked Robin Swicord, who wrote the screenplay for such films as Little Women and Matilda.

"Yes it is,” aspiring screenwriter Sallie West, author of  Moonflower, replied, voice rising, from her home in Charleston, South Carolina.

"Hi Sallie  I'm the head of the committee for the Nicholl Fellowships,” said Swicord. "I wanted to let you know the whole committee met today, most of them are hanging over my shoulder, and we are so excited to tell you that you are going to be a Nicholl Fellow..."

"Oh MY GOD!" West interrupted, bursting with joy.  "I'm all by myself here except for my dog. I want to scream."

"Put down the phone, scream, and come back," Swicord jokingly said, to the laughter of the committee.

"Oh my God. Oh my God thank you so much!" West continued, finally letting her excitement out. "I'm thrilled to death!”

West wasn’t the only writer receiving a memorable phone call that today from the Academy’s Nicholl committee. Five writers were chosen from a record pool of 7,511 submissions for this year's competition. At stake was not only a $35,000 prize for each chosen Fellow, but also the industry recognition that comes along with being highlighted by the Academy. Previous Nicholl Fellows have gone on to write major blockbusters (Air Force One, Erin Brockovich, Ever After, The Ring), to acclaimed indie hits (Akeelah and the Bee, Mi Vida Loca, The Mean Creek).

But before the fun of calling the new Fellows could begin, the committee first had to tackle the tough task of choosing the most deserving scripts from among the 10 finalists.

That decision was made just prior to the calls, during an animated three-hour meeting where 16 Academy members from six different branches (including Oscar winners from the acting, writing, and producing branches) passionately debated the pros and cons of the final ten screenplays.

"I am delighted for these winners,” said Nicholl vice chair Buffy Shutt, former EVP of Marketing at Participant Media. "What I like is there's a range of genres: we have a comedy; we have a futuristic, sci-fi movie; we have a tender love story; and we have another  dramedy, I'd say. So what I love about this is the different points of view and different kind of writing, and the passion that's in the room when we read and talk about these scripts. One person can love a script and one person can not get it at all."

One of the winning screenplays, a comedy named United States of Fuckin’ Awesome, had some strong support in the room from the co-writer of Legally Blonde, Kirsten Smith. But she was met with some dramatic opposition.

"I fought very hard to make sure comedy was represented in the awards," Smith said. In particular she championed United States (co-written by  Brophy of L.A. and Miles of Austin, TX) because "it was a very hard script to write and I think they nailed it."

The pair apparently nailed the title too. Even though it has that spicy word in it, the duo said no one ever tried to convince them to make the title more family friendly.

"We tried other, tamer versions of the title (such as United States of Super Awesome) but it didn’t pack the same punch and people were then shocked by the edgier content of the script," Brophy explained. "Having an extreme title also gave us something to live up to when writing. We’d constantly ask, is this scene funny enough for a movie with this title? No? Then let’s keep pushing."

"I thought it was well-realized. It was intelligent, interesting. I thought the characterizations were good," Roth said. "Moonflower  was very monochromatic in a way and then all of a sudden in the end you found yourself caught up in it.

"One of the things I always love about the Nicholl Fellowship committee are the incredibly passionate discussions that people have in which they're advocating for some special screenplay that they've fallen in love with,"  Swicord explained at the end of  the long day. "Sometimes they're the only person on the committee standing up saying 'I love this movie. This should definitely be our number one.' And there could be someone else in the room who could not disagree more. And to have that sort of range among these professionals from the different branches of committee is just a cool thing. It's cool to be in that room and feel that there is that much passion to be shared about writing.”

Join us in celebrating this year’s Nicholl Fellows at our special live-read event on Nov. 13.