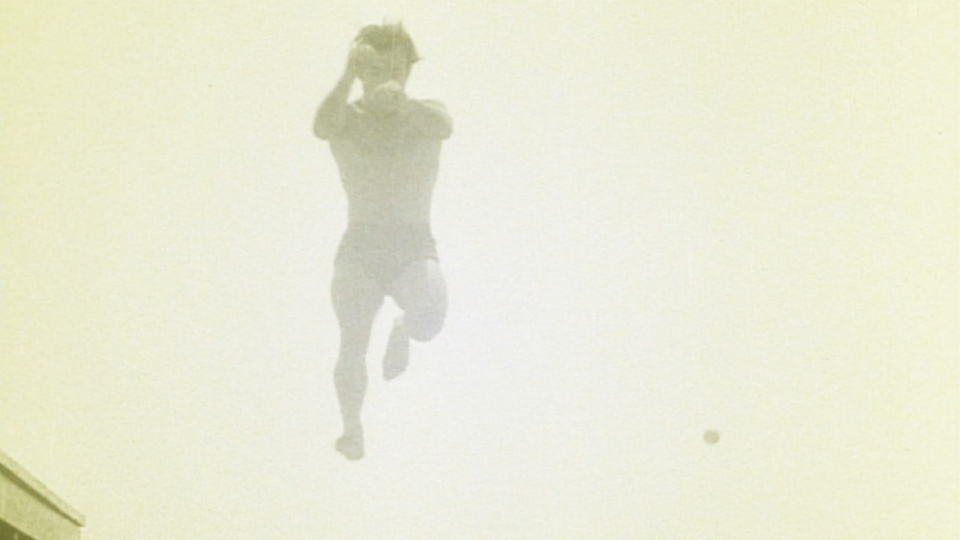 The original Muscle Beach, located south of the Santa Monica Pier, was constructed in 1934 by the Works Progress Administration with the intention of creating a park on a public beach. By the 1940s however, Muscle Beach frequently appeared as a standing joke in trade magazines and was often mentioned with innuendo in Hollywood gossip columns. For filmmaker Joseph Strick, however, the beach scene offered an opportunity to observe and document an emerging subculture of gymnasts, bodybuilders and exhibitionists. His 1948 short Muscle Beach, made with assistance from fellow filmmaker Irving Lerner, can be considered a carefree and wholesome portrait of a site that was then of questionable reputation. The film would be the first of Strick’s early efforts to highlight documentary footage of Los Angeles counterculture.

An aerial photographer during World War II, Strick used an army surplus movie camera to shoot the film during weekends in the fall of 1948 while working as a copy boy at the “Los Angeles Times.” The songs in “Muscle Beach,” composed and sung by political folk singer Earl Robinson, with lyrics by screenwriter and poet Edwin Rolfe, accent the film’s three-movement structure as it transitions between soaring gymnastics shows, flirty beachgoers and children playing near the now-demolished pier at Ocean Park.

Muscle Beach was shown in competition at Cannes in 1949 and won a prize at the Edinburgh International Film Festival in 1951. The short became a cult favorite, screening at film clubs around the world. By 1954, fitness culture was in full swing in the U.S., with films such as Athena featuring Hollywood stars in a health-conscious comedy. In 1959, the original Santa Monica Muscle Beach was closed, and fitness enthusiasts gravitated to a similar area in Venice Beach, which was renamed Muscle Beach Venice in 1987. The original Muscle Beach was refurbished by the city of Santa Monica in 1999, and both areas continue to attract bodybuilders, gymnasts, fitness buffs and their admirers today.

Joseph Strick’s body of work includes narrative, avant-garde and documentary films, and the blurring of these genres. His second feature, The Savage Eye (1960), which he wrote and directed with Ben Maddow and Sidney Meyers, won BAFTA’s Flaherty Documentary Award. Strick shared an Oscar nomination with Fred Haines for their adapted screenplay for Ulysses (1967), and would later receive an Academy Award for Best Documentary Short for Interviews with My Lai Veterans (1971). In 2001, the Academy Film Archive became the home of the Joseph Strick Collection, which holds over 100 items of negative and print material, as well as video tape elements. The Academy Film Archive restored Muscle Beach and The Savage Eye in 2008, and Strick’s controversial drama The Balcony in 2011.

Muscle Beach is courtesy of the Joseph Strick Estate.