Home / News / THE ACADEMY MUSEUM WELCOMES SACHEEN LITTLEFEATHER FOR AN EVENING OF CONVERSATION, HEALING, AND CELEBRATION ON SEPTEMBER 17

THE ACADEMY MUSEUM WELCOMES SACHEEN LITTLEFEATHER FOR AN EVENING OF CONVERSATION, HEALING, AND CELEBRATION ON SEPTEMBER 17 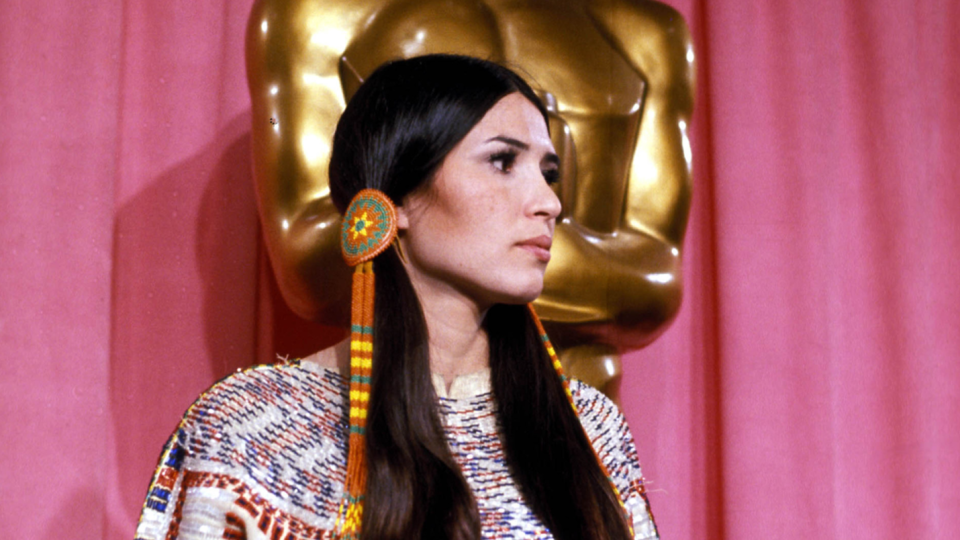 THE ACADEMY MUSEUM WELCOMES SACHEEN LITTLEFEATHER
FOR AN EVENING OF CONVERSATION, HEALING,
AND CELEBRATION ON SEPTEMBER 17

In 1973, Sacheen Littlefeather, a member of the Screen Actors Guild, became the first Native woman to stand onstage at the Academy Awards® ceremony, on behalf of Marlon Brando. At his request, Littlefeather did not accept Brando’s Best Actor award for The Godfather and gave a passionate 60-second speech regarding the stereotypes of Native Americans in the entertainment industry. She also brought attention to the 1973 Wounded Knee protest in South Dakota. This moment resulted in her being professionally boycotted, personally attacked and harassed, and discriminated against for the last 50 years.

Littlefeather’s speech is highlighted in the museum’s Academy Awards History gallery, and she was interviewed this spring by Jacqueline Stewart, Director and President of the Academy Museum, for the Academy Museum Podcast episode “Marlon Brando Cannot Accept this Very Generous Award” about the 1973 Oscars®, the Academy’s A.frame article, and a Visual History as part of the Academy’s Oral History Projects (to be released in September 2022). In June, Littlefeather was presented with a statement of apology, signed by former Academy President David Rubin. The apology is available in full below.

“Regarding the Academy’s apology to me, we Indians are very patient people—it’s only been 50 years! We need to keep our sense of humor about this at all times. It’s our method of survival,” said Littlefeather. “I never thought I’d live to see the day for this program to take place, featuring such wonderful Native performers and Bird Runningwater, a television and film producer who also guided the Sundance Institute’s commitment to Indigenous filmmakers for twenty years through the Institute’s Labs and Sundance Film Festival. This is a dream come true. It is profoundly heartening to see how much has changed since I did not accept the Academy Award 50 years ago. I am so proud of each and every person who will appear on stage.”

Jacqueline Stewart, Director and President of the Academy Museum, said, “We are delighted and humbled that Sacheen has so generously chosen to engage with the museum and Academy to reflect upon her trying experience at the 1973 Academy Awards. Our thanks go out to Bird Runningwater and Heather Rae for helping us foster our cherished relationship with Sacheen. We hope our event on September 17 offers Sacheen and our audiences a moment of collective healing and a new path forward.”

An Evening with Sacheen Littlefeather will encourage reflection on the historic evening in 1973 and focus on a future founded on healing and celebration. The event, programmed by Sacheen Littlefeather and produced by Academy Museum Vice President of Education and Public Engagement Amy Homma, is part of the museum’s ongoing dedication to create programs and exhibitions in partnership with film artists and communities that illuminate the entertainment industry’s past and pave the way for meaningful change in its future.

Tickets are free to the public and available on the Academy Museum website. Reservations are required.

I write to you today a letter that has been a long time coming on behalf of the Academy of Motion Picture Arts and Sciences, with humble acknowledgment of your experience at the 45th Academy Awards.

As you stood on the Oscars stage in 1973 to not accept the Oscar on behalf of Marlon Brando, in recognition of the misrepresentation and mistreatment of Native American people by the film industry, you made a powerful statement that continues to remind us of the necessity of respect and the importance of human dignity.

The abuse you endured because of this statement was unwarranted and unjustified. The emotional burden you have lived through and the cost to your own career in our industry are irreparable. For too long the courage you showed has been unacknowledged. For this, we offer both our deepest apologies and our sincere admiration.

We cannot realize the Academy's mission to "inspire imagination and connect the world through cinema" without a commitment to facilitating the broadest representation and inclusion reflective of our diverse global population.

Today, nearly 50 years later, and with the guidance of the Academy’s Indigenous Alliance, we are firm in our commitment to ensuring indigenous voices—the original storytellers—are visible, respected contributors to the global film community. We are dedicated to fostering a more inclusive, respectful industry that leverages a balance of art and activism to be a driving force for progress.

We hope you receive this letter in the spirit of reconciliation and as recognition of your essential role in our journey as an organization. You are forever respectfully engrained in our history.

ABOUT THE ACADEMY MUSEUM OF MOTION PICTURES

The Academy Museum is the largest museum in the United States devoted to the arts, sciences, and artists of moviemaking. The museum advances the understanding, celebration, and preservation of cinema through inclusive and accessible exhibitions, screenings, programs, initiatives, and collections. Designed by Pritzker Prize-winning architect Renzo Piano, the museum's campus contains the restored and revitalized historic Saban Building—formerly known as the May Company building (1939)—and a soaring spherical addition. Together, these buildings contain 50,000 square feet of exhibition spaces, two state-of-the-art theaters, the Shirley Temple Education Studio, and beautiful public spaces that are free and open to the public. These include: The Walt Disney Company Piazza and the Sidney Poitier Grand Lobby, which houses the Spielberg Family Gallery, Academy Museum Store, and Fanny’s restaurant and café. The Academy Museum exhibition galleries are open seven days a week, with hours Sunday through Thursday from 10am to 6pm and Friday and Saturday from 10am to 8pm.