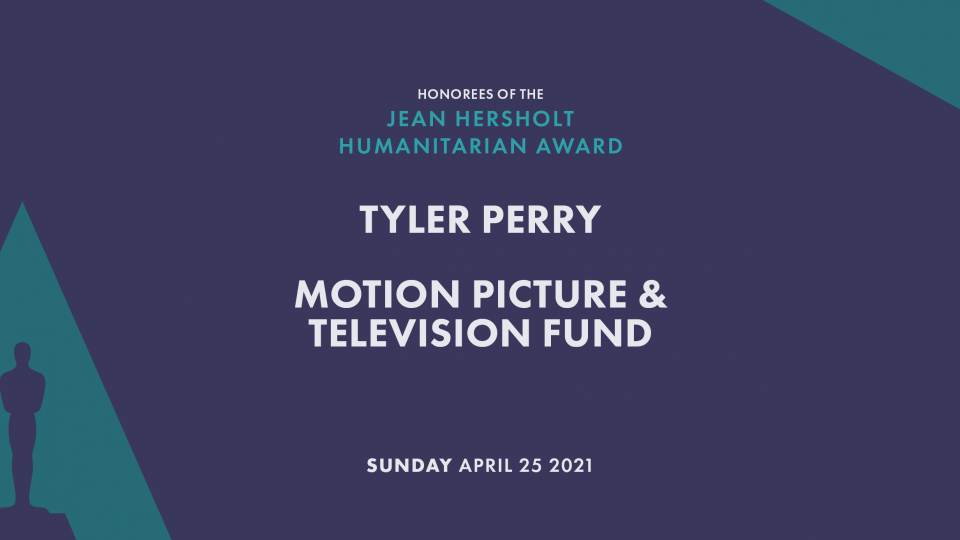 The Academy announced today that its Board of Governors voted to present Jean Hersholt Humanitarian Awards to filmmaker Tyler Perry and to the Motion Picture & Television Fund (MPTF).  The Oscar® statuettes will be presented at the 93rd Oscars®, which airs live on ABC and broadcast outlets worldwide on Sunday, April 25, 2021.

“There has been such widespread generosity in our industry that limiting the Hersholt Humanitarian Award to one recipient, this year in particular, was impossible. So, we are breaking with tradition and giving two awards to honor that spirit,” said Academy President David Rubin.  “Tyler’s cultural influence extends far beyond his work as a filmmaker.  He has quietly and steadily focused on humanitarian and social justice causes from the beginning of his career, caring for people who are most often ignored. The work of the MPTF is more vital than ever, and the organization has gone above and beyond to help our community.  The sheer number of individuals and families—from every corner of our industry’s workforce—aided during the pandemic and over the last 100 years is nothing short of extraordinary.”

Perry is a prolific producer, director, actor, writer, entrepreneur and philanthropist, whose commitment to a wide spectrum of charitable and social justice causes has been particularly impactful during the challenges of the past year, addressing economic distress caused by the pandemic, racial reckoning and homelessness in his community.  In 2019, he opened his privately owned motion picture studio on the site of a former Confederate Army base in Atlanta, Georgia.  Tyler Perry Studios now occupies more than 330 acres and is home to a state-of-the-art production facility with 12 soundstages that provides hundreds of job opportunities in film and television production in the local area. Perry was instrumental in quickly creating a safe way to return to production during the worldwide health crisis.  His credits as writer, director and/or producer include “A Fall from Grace,” “Acrimony,” “Madea Goes to Jail,” “Madea’s Family Reunion” and “Diary of a Mad Black Woman.”  His television credits include such series as “Sistas,” “The Haves and the Have Nots,” “The Oval” and “House of Payne,” and he has written numerous stage plays.

Now in its 100th year, the Motion Picture & Television Fund (MPTF) offers a variety of services to provide emotional and financial relief to entertainment industry members and their families during times of need, including case management, financial assistance for basic living expenses, palliative care, and senior and childcare services.  The organization’s contribution during the pandemic has made a significant impact on the entertainment community, providing social services support to nearly 9,000 industry members in 2020.  MPTF also offers a wide range of housing accommodations from independent and assisted living to nursing and memory care.  Jean Hersholt, for whom the Academy’s humanitarian award is named, served as president of the Fund for 18 years, from 1938 until his death in 1956.

The Jean Hersholt Humanitarian Award is an Oscar statuette.  This is the first time an organization will be recognized with this award.

The awards will be presented during the Oscars in lieu of the Academy’s Governors Awards, an annual ceremony in the fall, where the Jean Hersholt Humanitarian Award is customarily presented.

The 93rd Oscars will be held on Sunday, April 25, 2021, and will be televised live on ABC and in more than 225 countries and territories worldwide.