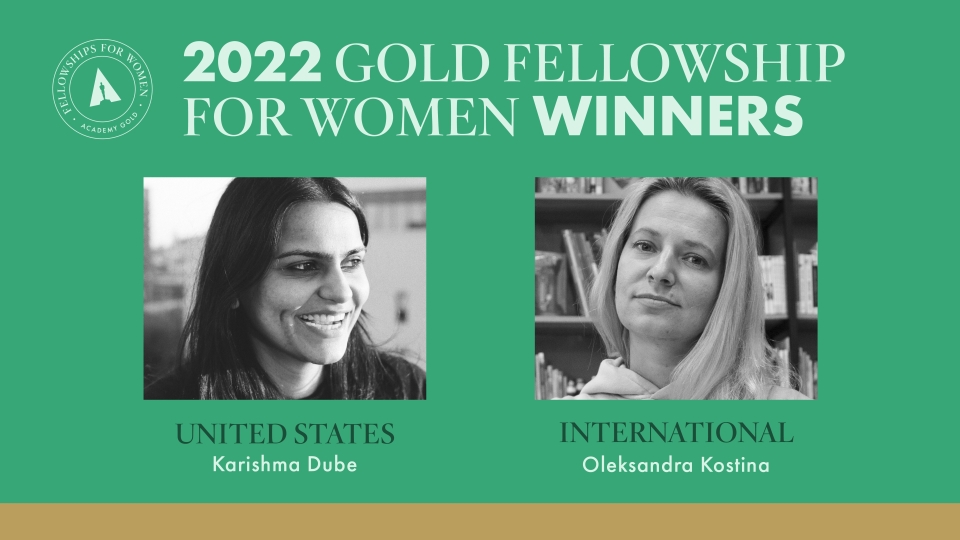 2022 Fellowship Presented in Partnership with CHANEL

Karishma Dube and Oleksandra Kostina have been selected to be the domestic and international recipients, respectively, of the 2022 Academy Gold Fellowship for Women.  Part of the Academy Gold global talent development and inclusion initiative, the Fellowship for Women is a one-year program that combines direct support, personalized mentorship and access to once-in-a-lifetime networking opportunities for emerging women filmmakers to further their pursuits in the field.  The Academy currently awards two fellowships annually, one in the U.S. with a prize amount of $35,000 and one internationally in the amount of €20,000.  The fellowship, presented this year in partnership with CHANEL, is now in its fifth year.

Fellows also receive lifelong career advancement support through the Gold Alumni Program, which provides continued access, opportunity, professional development and education for alumni of Academy Gold programs, including Gold Rising, the Student Academy Awards and the Nicholl Fellowships in Screenwriting.  To be eligible for the domestic fellowship, applicants must be alumnae of an Academy Gold program or be nominated by an Academy Gold partner company, while international applicants must be recommended by a member of a key film organization or production company in order to be considered.

CHANEL’s support of the Academy Gold Fellowship for Women reflects the House’s deep commitment to the art of film and dedication to nurturing the next generation of women filmmakers.  Since its inception, the House of CHANEL has been intrinsically linked to the world of film.  House founder and visionary Gabrielle Chanel worked with the leading filmmakers of her time, drawing inspiration from and supporting her fellow creative peers.  Her legacy of fostering creativity lives on through CHANEL’s dedication to film, which is expressed through programs such as the Academy Gold Fellowship for Women and the brand’s other long-standing film partnerships.

Born and raised in New Delhi and now based in New York, Dube is an alumna of the graduate film program at New York University.  Her film “Bittu” premiered at the Telluride Film Festival in 2021 and was shortlisted in the Live Action Short Film category for the 93rd Academy Awards©.  The film also won a DGA Student Film Award and a Student Academy Award in 2020.  Her previous film, “Devi,” played in 54 international film festivals, including the BFI London Film Festival, Frameline and Outfest LA, where it won the Grand Jury Award for Best Narrative Short in 2017.  Dube was featured in Filmmaker magazine’s “25 New Faces of Independent Film” in 2021, and her work has appeared on BBC World News, The Advocate and The Juggernaut.  Her work as director and producer has been supported by BAFTA, the Tribeca Film Institute, and Women in Film and Sundance Institute.  She is currently developing her first feature as a writer-director.

Kostina received a master’s degree in economics from the Kyiv National Economic University in 2008.  She began her career in the film industry in 2007, working as a line producer for television films, documentaries and television shows.  Since 2013, she has been a freelance executive and line producer on feature films, mostly international co-productions.  Her credits as an executive producer include Myroslav Slaboshpitskiy’s “The Tribe” and Nariman Aliev’s “Evge,” both of which premiered at the Cannes Film Festival.  Her credits as a line producer include Mantas Kvedaravicius’s “Partenonas,” which premiered at the Venice International Critics’ Week.  In 2018, Kostina established the production company Bosonfilm, which specializes in narrative features, and in 2019 she became a co-owner of the stop motion animation studio Happy Hippie Lab.  Her debut project as a producer is the feature film “Pamfir,” directed by Dmytro Sukholytkyy-Sobchuk.  The film is a Ukraine-France-Poland-Chile-Luxembourg-Germany co-production and premiered in the Directors’ Fortnight at Cannes this year.

The 2022 fellows were selected from a group of 12 finalists.  The finalists are:

For more information about the Academy Gold Fellowship for Women, visit https://www.oscars.org/academy-gold/fellowship-for-women.

###
ABOUT THE ACADEMY
The Academy of Motion Picture Arts and Sciences is a global community of more than 10,000 of the most accomplished artists, filmmakers and executives working in film. In addition to celebrating and recognizing excellence in filmmaking through the Oscars, the Academy supports a wide range of initiatives to promote the arts and sciences of the movies, including public programming, screenings, publications, educational outreach, exhibitions, and more.