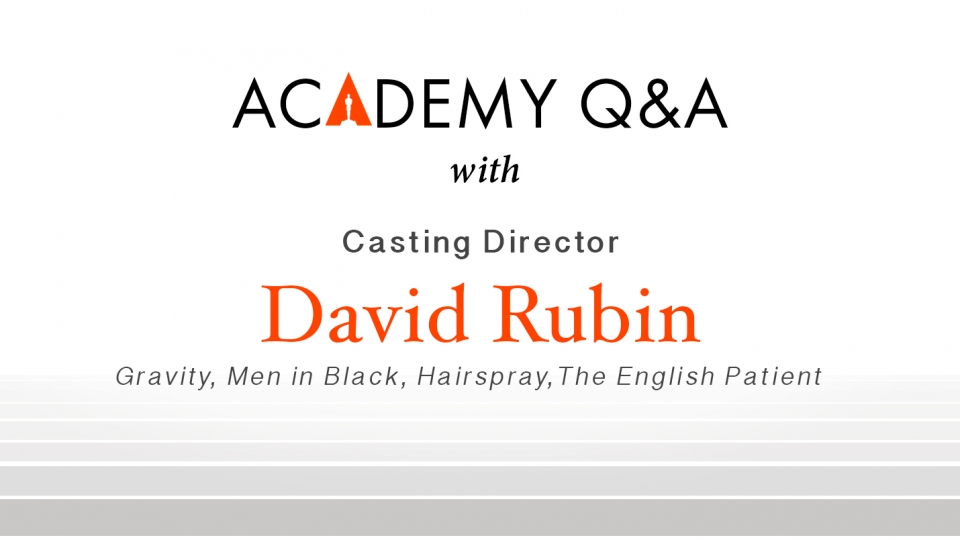 Q: What is the number 1 thing that you look for when casting?

A:   I look for compelling and, ideally, unexpected ways of portraying each character. Our choice of each actor must help tell the film's story in a particular way and hopefully gives it a depth and a dynamic that might even go beyond what the screenwriter and the other filmmakers had originally envisioned. In order to do that, I'm looking for actors who are skilled in their craft and who bring an individuality that makes them distinct from so many others.

Of course there are many other factors involved in deciding which actors to bring into the frame for discussion with a director, but that's the primary one.

Q.  How much do you listen to the screenwriter's description of a character and how much of it do you project onto the actor?

A. Actually, one of the first things I do when reading a script is ignore any specific descriptions of a character. It's not that I don't respect the intentions of a screenwriter. But writers describe characters very specifically, NOT for the filmmakers, but really for studio executive and financiers, so they'll read the script and see a movie in their heads which they'll hopefully want to finance and distribute.

But once a movie is in pre-production and we're contemplating casting options, I think it's best to forget about specifics like age, race and gender and just think about who are the actors who would be believable in a role and help drive the story forward in interesting ways. A doctor doesn't always have to be a white male in his 50's. A gang member doesn't have to be an ethnic minority. You get the idea. I find we casting directors are the ones often pushing for diversity and urging directors to go beyond their first instincts for a role.

A: My own moviegoing taste goes toward smaller, independent films that involve intense interaction between characters. I'm drawn to complex family stories or dark comedies that explore the complexity of relationships. Very few explosions or car chases. Nothing makes me happier than seeing two great actors going at it in a medium close up on the big screen. I guess it's no surprise that the kind of films I like to watch and also the ones I most like to cast.

Q: What do you look for when casting an evil character?

A: The important thing to keep in mind when casting an "evil" character is that it should be played by an actor who is skilled enough to convey the emotional complexity beneath the 'bad things' the character does. I think most actors who've played villainous roles successfully will tell you they never approached the character as someone who was 'bad'. They needed to find the character's justification for their actions, however psychologically complex those are. That takes an actor of skill, in order to convey the humanity of the villain. You may not realize it while you're watching the film, but I bet some of your favorite villains are great because of the complexity the actors gave the character, beneath their actions.

Q: What can really turn you off in a casting situation, as in; are there things that actors do that means you won't consider them, other than look?

A: The most important thing for an actor to do in a casting situation is to prepare well and make clear choices for your character in the audition scene. We realize you often don't have access to a complete script and are making guesses about the character, based on little information, but making firm choices and playing with conviction is the key. So what really turns me off is the lack of preparation and the lack of distinct choice. Even if an actor is wrong for that role, if they're true to their instincts and are committed to their acting choices, I'll remember them and happily have them in for a future film!

Head over to the Academy's Facebook page to read the full Q&A.  Then catch up on all our Academy Q&As here.