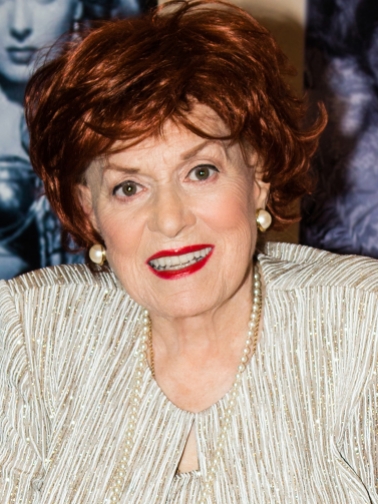 Maureen O’Hara first captured the public’s eye in her breakout role as the dancing gypsy, Esmeralda, in The Hunchback of Notre Dame. She has held our attention ever since. Known for playing feisty heroines, O'Hara's famously flame-red hair lit up the screen like no other star from Hollywood’s golden age. In a career that has spanned over seventy-five years, she has starred in over sixty motion pictures including such critically acclaimed classics as Miracle on 34th Street, The Quiet Man, and How Green Was My Valley. She is widely recognized as Ireland's most renowned and celebrated actress.

Born Maureen FitzSimons on August 17, 1920 in Ranelagh, Ireland, O’Hara began acting at age five with her own shadow. She studied at the Ena Mary Burke School of Elocution and Drama and by age ten had joined the Rathmines Theatre Company working in amateur productions. She was soon hired by Radio Telefis Eireann (RTE) to perform classic plays over the radio reaching nearly every household in Ireland.

As a teenager, Maureen FitzSimons joined the famed Abbey Theatre and worked nights typing tags at a local laundry. She was offered a leading role with the Abbey Players at age seventeen but chose instead to take a motion picture screen test in London at the request of Elstree Studios. Her screen test caught the attention of Oscar-winning actor and producer Charles Laughton, who quickly signed her to a seven-year contract. Laughton launched his new protégé’s film career by casting her as his niece, Mary Yellan, in Alfred Hitchcock's Jamaica Inn (1939) and by changing her screen name to Maureen O’Hara.

Maureen O’Hara first arrived in Hollywood in 1939 to make her American film debut (opposite Laughton’s Quasimodo) in The Hunchback of Notre Dame. She was unable to return to Ireland with the outbreak of World War II and became part of Hollywood’s studio system when her contract was sold to RKO Pictures. In 1941, O'Hara achieved critical acclaim for her haunting portrayal of Angharad in the Welsh family saga How Green Was My Valley, which marked her first collaboration with legendary director John Ford. The film went on to win five Oscars including Best Picture and Best Director.

During the 1940s and 1950s, O'Hara was often cast in lavish Technicolor movies. Her fiery characters and striking features earned her the nickname "Queen of Technicolor." O’Hara is also the first female action star, having performed many of her own stunts and sword fighting sequences in swashbuckling pictures. The most notable include The Black Swan with Tyrone Power, Sinbad the Sailor with Douglas Fairbanks Jr., and At Sword’s Point with Cornel Wilde. In 1947, O'Hara appeared in the holiday classic Miracle on 34th Street, playing a single mother whose sensibilities are challenged by Santa Claus.

This period in O’Hara’s career is also highlighted by her frequent work with John Ford and John Wayne. Her screen chemistry with Wayne was dynamic and she served as “the Duke’s leading lady” in a series of Ford films including Rio Grande, The Wings of Eagles, and her personal favorite, The Quiet Man.

O'Hara turned to lighter roles in the 1960s appearing in family comedies such as The Parent Trap, Mr. Hobbs Takes a Vacation, McLintock!, and Spencer’s Mountain. In 1971, she reunited with John Wayne a final time in the western comedy Big Jake, before retiring to operate a Caribbean commuter airline with her husband, aviator Charles F. Blair. Upon Blair’s tragic death in a plane crash, O’Hara became the first woman in United States history to head a scheduled commercial airline.

In 1991, following a 20-year hiatus, O'Hara returned to the silver screen to play John Candy's overbearing Irish mother in the bittersweet comedy Only the Lonely. She later starred in a string of television movies and published her bestselling memoir, Tis Herself, in 2004.