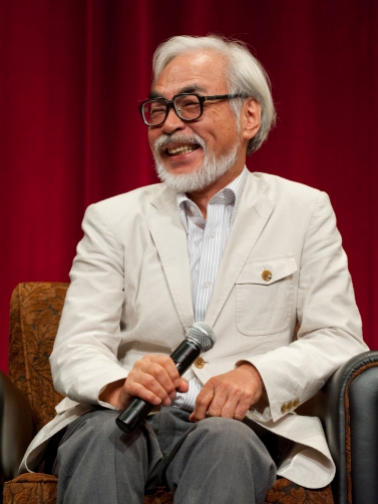 Born in 1941 in Tokyo, Japan.  After graduating from Gakushuin University in 1963 with a degree in Political Science and Economics, Hayao Miyazaki joined Toei Animation Company as an animator.  He worked under the director Isao Takahata for scene planning and key animation for the production of THE LITTLE NORSE PRINCE VALIANT (1968).  He then moved to the animation studio A Production with Takahata in 1971 where he worked on the original concept, screenplay, layout design and key animation for PANDA! GO PANDA! (1972).  Miyazaki worked at various studios including Zuiyo Eizo with Takahata, Nippon Animation, and Telecom, and did scene planning and layout designs for the TV series HEIDI, A GIRL OF THE ALPS (1974) and FROM THE APENNINES TO THE ANDES (1976), and directed his first TV series CONAN, THE BOY IN FUTURE (1978).  He debuted as a director of theatrical features with THE CASTLE OF CAGLIOSTRO (1979).  In 1984, Miyazaki wrote and directed his feature NAUSICAÄ OF THE VALLEY OF THE WIND, based on his original graphic novel serialized in the monthly animation magazine “Animage”.

Miyazaki co-founded Studio Ghibli in 1985 with Takahata, and has directed nine feature films since, including CASTLE IN THE SKY (1986), MY NEIGHBOR TOTORO (1988), KIKI’S DELIVERY SERVICE (1989), PORCO ROSSO (1992) and PRINCESS MONONOKE (1997).  SPIRITED AWAY (2001) broke every box office record in Japan, and garnered many awards, including the Golden Bear at the 2002 Berlin International Film Festival and the Oscar for Best Animated Feature Film at the 2003 U.S. Academy Awards.  HOWL’S MOVING CASTLE (2004) received the Osella Award at the 2004 Venice International Film Festival.  Miyazaki was awarded the Golden Lion for Lifetime Achievement at the 2005 Venice International Film Festival.  He wrote and directed PONYO ON THE CLIFF BY THE SEA (2008).  He contributed to the planning and wrote the screenplays for Hiromasa Yonebayashi’s ARRIETTY (2010) and Goro Miyazaki’s FROM UP ON POPPY HILL (2011).  In 2012, Miyazaki was named a “Person of Cultural Merit” by The Government of Japan.

Miyazaki has published a number of books of essays, drawings and poems, including “Shuppatsuten 1979-1996 (Starting Point: 1979- 1996, 1996)”.  He has designed several buildings, including the Ghibli Museum, Mitaka, which opened in 2001, for which he serves as Executive Director.  His new film, THE WIND RISES, opened in July 2013 in Japan.