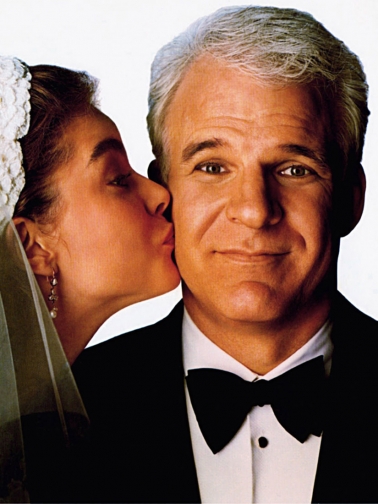 One of the true comedic geniuses of his generation, Steve Martin came to motion pictures bearing prodigious comedic gifts. Over a long and multifaceted career, he has achieved extraordinary success in many other creative roles as well – as dramatic actor, screen writer, novelist playwright and musician.

“Comedy is a distortion of what is happening, and there will always be something happening."

Born in 1945 in Waco, Texas, Martin moved with his family to Los Angeles in 1950, eventually ending up in Garden Grove. At age 10, the naturally outgoing Martin got weekend and summer work hawking guidebooks at Disneyland, and as a teenager, manning the Fantasyland magic shop. In addition to honing his magic skills at the Happiest Place on Earth, he learned to juggle and do rope tricks.

While still in high school, he also taught himself to play the banjo. After graduation, he studied philosophy and theater in college, got a steady acting gig at Knott's Berry Farm, and began developing his standup routine at local folk clubs. Martin added writing to his résumé in 1967, when he joined the writing staff of the innovative TV show "The Smothers Brothers Comedy Hour."

After winning an Emmy® in 1969, Martin moved on to "The Sonny & Cher Comedy Hour" while perfecting his standup routine on the road and on numerous TV talk shows. In 1976, he made the first of his many appearances on "Saturday Night Live," one of which inaugurated his surprise Billboard-charting hit song, "King Tut."

Then the big screen beckoned. In 1977, Martin wrote and starred in the Oscar-nominated short THE ABSENT-MINDED WAITER, and in 1979, he teamed up with Carl Reiner, starring in and co-writing the hit THE JERK. Three more Martin-Reiner collaborations followed, including DEAD MEN DON'T WEAR PLAID (1982) and the critically acclaimed ALL OF ME (1984). For the 1981 film version of Dennis Potter's musical series PENNIES FROM HEAVEN, Martin explored life's darker side, while also learning to tap dance.

As if that weren't enough, from 1977 to 1981 he released three albums and starred in four TV specials, honing the mixture of surrealism, daring, Hollywood homage and intelligent wit that would characterize much of his film work. While Martin jokes that he sees himself "as an actor first, because writing is what you do when you are ready and acting is what you do when someone else is ready," his talent for doing both well was applauded. Still, he challenged himself as a writer-actor with the award-winning ROXANNE (1987), a modern re-imagining of Cyrano de Bergerac, and the hilarious depiction of his adopted hometown, L.A. STORY (1991).

In the 1990s, following his nuanced performance in PARENTHOOD (1989), filmgoers embraced Martin's everyman persona, flocking to see him as the be leaguered dad in the remake of FATHER OF THE BRIDE (1991). He also proved his skills as a dramatic actor thanks to an unpredictable turn in Lawrence Kasdan's GRAND CANYON (1991), which he followed with the challenging role of a faith healer in LEAP OF FAITH (1992). He even proved his proficiency with the famously tricky dialogue of David Mamet in the acclaimed thriller THE SPANISH PRISONER (1997).

During the 2000s, Martin further diversified his creative pursuits, turning out essays, plays and novels, including Shopgirl, which he adapted for film in 2005. He also made three appearances as host of the Academy Awards telecast. On the big screen, he warmed hearts with such films as IT'S COMPLICATED (2009) and THE BIG YEAR (2011).

In 2005, Martin received the Mark Twain Prize for American Humor, America's highest honor for humorists. In 2007, he was recognized for his boundary-breaking talents at the Kennedy Center Honors. His artistic journey has been long and varied, but no matter where his creativity takes him, he's never far from the thing he loves best: "Comedy. I love comedy."