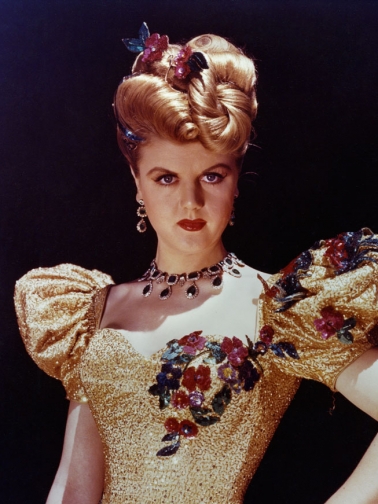 Angela Lansbury has been captivating audiences for seven decades in roles ranging  from sassy salon singer to sharp-witted sleuth. With equal ease, she’s played a princess, a pirate, a witch and a wench, and triumphed as not only a beloved movie star, but also the belle of Broadway and the queen of primetime television.

“I think of myself as a journeyman actress. I will attempt almost anything I think I can bring off."

Born in London in 1925, Lansbury wanted to be a performer from an early age, and studied at the Webber Douglas School of Singing and Dramatic Art before moving to New York with her brothers and actress mother, just before the 1940 London Blitz. She continued studying drama and got her first professional entertainment job doing cabaret in Montreal. After relocating to Los Angeles, Lansbury worked at Bullock's Wilshire department store while auditioning for roles.

In 1943, 17 year-old Lansbury came to the attention of director George Cukor, who gave her a plum role in GASLIGHT (1944). That led to a seven-year contract at MGM and a salary of $500 per week. As Nancy, the conniving Cockney maid, Lansbury more than held her own in scenes with Ingrid Bergman and Charles Boyer, and received the first of her three nominations for Best Supporting Actress. She was then cast as Sybil in THE PICTURE OF DORIAN GRAY (1945), and earned her second Oscar nomination for her performance.

Despite her youth, the versatile Lansbury was destined to play mature women. In Frank Capra's STATE OF THE UNION (1948), the 23-year-old Lansbury portrayed a 45-year-old newspaper magnate embroiled in an affair with Spencer Tracy. In Cecil B. DeMille's SAMSON AND DELILAH (1949), she played lead actress Hedy Lamarr's older sister, though she was 11 years younger than Lamarr.

Lansbury began working in television and theater in the early 1950s, debuting on Broadway in Hotel Paradiso opposite Bert Lahr in 1957. On screen, she continued to tackle diverse roles and received her third Oscar nomination as the manipulative mother in THE MANCHURIAN CANDIDATE (1962). In 1966, she was propelled into Broadway superstardom in the smash musical Mame and earned her first of five, record-tying Tony Awards®.

Back in Hollywood, Lansbury charmed audiences as the witchcraft-loving heroine of Disney's BED KNOBS AND BROOMSTICKS (1971). She demon strated her singing and dancing prowess in yet another venue with a dazzling opening number for the Academy Awards telecast in 1973. In 1978, she co-starred in the Agatha Christie who dunit DEATH ON THE NILE, playing a romance novelist caught up in a murder on board a ship. After a 1980 turn as Christie's Miss Marple in THE MIRROR CRACK'D, Lansbury achieved one of her greatest successes, portraying mystery writer and amateur sleuth Jessica Fletcher in the hit series "Murder, She Wrote" (1984 1996). The highly rated series brought her 12 consecutive Emmy® nominations.

Although the 1980s and '90s found Lans bury concentrating mostly on theater and television, she returned to Disney in 1991 to give voice to Mrs. Potts in BEAUTY AND THE BEAST, for which she sang the Oscar winning title song. She also appeared as a host in the Disney film FANTASIA/2000, along with Steve Martin, Itzhak Perlman and others.

Throughout the decades, Lansbury's talent, intelligence and humor have established her as a consummate professional. She was only 20 years old when she said, "I'm willing to let fate play its part in my life… The essential thing is to prepare yourself for the opportunities that come to you." That attitude has served her well in her 70-year career, and the venerable actress is showing no signs of stopping.