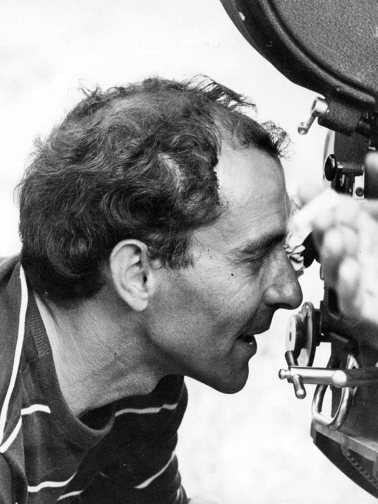 Jean-Luc Godard’s career has spanned over half a century with the one constant in his work being that each new movie is primarily a study of form in relation to an idea. The forms evolved and the ideas changed, but his exploration of the relatedness of the two remained the same.

Born in Paris in 1930 and raised in Switzerland, Godard studied ethnology at the Sorbonne but reportedly spent more time in movie theaters than in class. He began to write about the films he saw in Cahiers du Cinema and formed alliances with artists who would become the nucleus of the French New Wave. Though loosely modeled after Hollywood gangster pictures, Godard’s debut feature “Breathless” (1960) challenged cinematic conventions and stunned critics, filmmakers and audiences alike with its improvisational style, impulsive handheld camerawork and intentional jump-cuts. As this iconoclastic film took the world by storm, its director became a leading spokesman for the New Wave.

Godard’s subsequent work maintained his career-long commitment to the symbiotic tension between form and content as well as the ongoing duality of high and low art and sound and image. His later films are often marked with a formal beauty that belies the roiling tension within, for example:  “Passion” (1982), “Prénom Carmen” (1983), “Je vous salue, Marie,” which was condemned by the Catholic Church for alleged heresy (1985), “King Lear” (1988), “Germany Year 90 Nine Zero” (1991) and “For Ever Mozart” (1996). In his ambitious eight-part documentary “Histoire(s) du cinéma” (completed in 1998), Godard examined no less than the totality of film as the great 20th-century art form. Godard’s latest film, “Film Socialisme,” debuted at Cannes this year.

After meeting a young François Truffaut and Jacques Rivette at a Paris film club, Godard published his first film piece of criticism under the pseudonym “Hans Lucas” in a monthly journal founded by Eric Rohmer in 1950.

He could not afford a camera dolly for “Breathless,” so he pushed his cinematographer around in a wheelchair during the shooting.

When the first edit of “Breathless” was too long for distribution, he trimmed multiple scenes rather than excising any, creating the “jump cuts” that became a stylistic trademark of the film.

Godard declined the opportunity to direct “Bonnie and Clyde” (1967); the film would ultimately receive 10 Oscar® nominations and two Oscars®.

He considered Richard Burton for the lead in “Pierrot le fou” (1965) before re-teaming with the star of “Breathless” and “A Woman Is a Woman,” Jean-Paul Belmondo.

He once said, “The cinema is truth 24 times a second.”