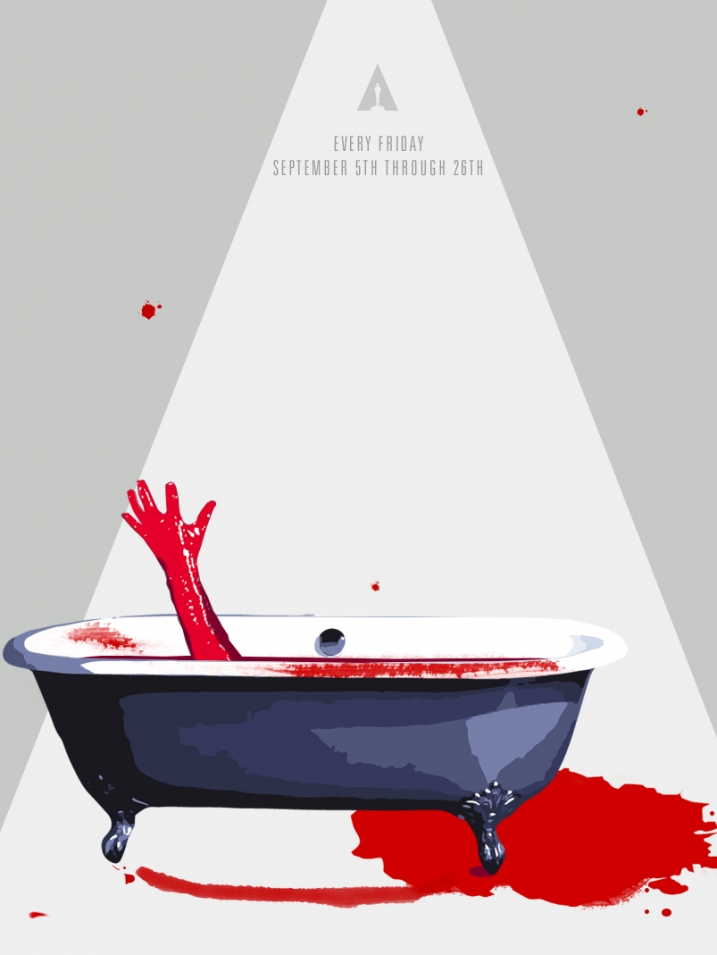 The Academy pays a centennial tribute to one of the most popular and prolific filmmakers in fantastic cinema: William Castle. Castle had already directed more than three dozen features – chiefly film noirs and westerns – when a viewing of Henri-Georges Clouzot’s 1955 French thriller Diabolique inspired him to try his hand at the genre. The resulting film was 1958’s Macabre, a small-town mystery. To help build audience interest in his low-budget, no-star picture, Castle had the brainstorm of offering a $1,000 Lloyd’s of London insurance payment to any audience member who died of fright while watching his chiller.

The success of Macabre led to a new career for Castle as a producer-director of horror films sold with inventive gimmicks such as “Emergo,” a skeleton that flew over audiences watching the Vincent Price spookfest House on Haunted Hill; “Illusion-O,” special glasses that allowed patrons to see all 13 Ghosts in their full gory glory; and “Percepto,” buzzers under theater seats that startled moviegoers in the grip of The Tingler, Castle’s signature film.

Castle also became a self-styled Alfred Hitchcock of horror, appearing as himself on-screen to introduce his films – or in the case of Mr. Sardonicus in 1961, to ask the audience to choose an ending for the picture – and set up their gimmicks with mordant delight. (A brief cameo in Rosemary’s Baby, a film that he produced, is worthy of Hitch.)

Prepare to be thrilled and chilled by such stars as Vincent Price, Joan Crawford, Barbara Stanwyck, Robert Taylor, Margaret Hamilton and Richard Conte in the Academy’s series of eight Castle classics, including a rare screenings of his 1951 Tinseltown whodunit Hollywood Story and 1964's surrealist, suspenseful The Night Walker.  Plus, for every screening we’ll have ghoulish giveaways and frightful freebies!

Vincent Price plays a prison pathologist who discovers that the source of fear in the human body is a spinal-cord arthropod that he dubs “The Tingler.” The only cure for it? Scientifically speaking: screams! Producer-director William Castle sets much of his film in a silent movie theater run by a deaf-mute, and the film’s ingenious climax finds the audience being pursued by an unleashed Tingler. Throw in some self-experimentation with hallucinogens and a gory sequence in which vivid color pops out in the otherwise black-and-white film, and you have one of Castle’s most popular entertainments.

Before devoting his career to horror, William Castle directed this scintillating murder mystery set amid the sound stages, commissaries and front offices of Hollywood. Veteran noir star Richard Conte (Whirlpool, The Big Combo) plays a pioneering, take-no-guff theater luminary from New York – loosely based on Castle colleague Orson Welles – who has come out West to produce his first picture. But once he settles into a tumbledown shack on the National Artists Studios lot, he finds himself inhabiting a crime scene for a still-unsolved murder that dates back to the silent era and may involve some of its biggest players. Becoming obsessed with the case, he decides to make it the subject of his cinematic debut. He soon finds himself getting perilously close to a deadly conspiracy. Shot on evocative Los Angeles locations including the Chaplin Studios, the Motion Picture Home, Zuma Beach and Jacks At The Beach, Hollywood Story boasts a wonderful cast of silent stars as well as cameos from Joel McCrea and Francis X. Bushman. Even without flying skeletons and buzzing seats, this dark gem shows that Castle knew how to thrill an audience.

Introduced by Joe Dante.
The first of two teamings of Vincent Price and William Castle helped to solidify the actor’s emerging fame as a horror star with this droll mystery about a group of people offered $10,000 by a millionaire if they can survive the night in a haunted house (whose exteriors are played by Frank Lloyd Wright’s Ennis House in Los Feliz). The cast of potential victims includes Richard Long and Elisha Cook, Jr. (who gets the film’s memorable last line), and for the film Castle created one of his most unforgettable gimmicks – “Emergo,” which sent a full-sized skeleton flying over the heads of moviegoers. A 1999 remake starred Geoffrey Rush and Famke Janssen, but accept no substitutes.

Struggling to make ends meet, the Zorba family jumps at the opportunity to move into a ramshackle Victorian mansion inherited from an eccentric uncle. Eleven-year-old Charles Herbert, a veteran of such genre classics as The Fly and The Colossus of New York, plays Buck, who soon discovers that the house is a lot less empty than his parents had originally hoped. Martin Milner and The Wizard of Oz’s unforgettable Margaret Hamilton are among the cast of potential future ghosts. To publicize 13 Ghosts, Castle concocted a special process called “Illusion-O,” which employed a blue wash on the film stock so that audience members brave enough to use a special viewer got an enhanced look at the on-screen spirits.

Castle took a rare venture into period horror for this 19th century-set chiller about a baron who inhabits a remote castle in far-off Gorslava, and whose eerie mask hides a ghoulish mystery. Veteran fantasy-horror writer Ray Russell (The Premature Burial and “X” – The Man with X-Ray Eyes) adapted his own short story for the screen, with Ronald Lewis playing an English surgeon with a penchant for massage who has the unenviable task of treating the sinister Baron Sardonicus (Guy Rolfe). The supporting cast includes the great character actor Oskar Homolka (I Remember Mama, Funeral in Berlin) as Krull, the baron’s brutish servant with a fondness for leeches. For this Gothic, fog-drenched chiller, Castle created the “Punishment Poll,” which supposedly gave audiences the chance to choose between two different endings to decide the Baron’s ultimate fate, although only one ending was actually produced.

William Castle teamed up Golden Age icons (and real-life former married couple) Barbara Stanwyck and Robert Taylor for this creepy mind-bender from the pen of Psycho novelist Robert Bloch.  In her final big screen leading role, Stanwyck plays a wealthy woman who finds herself increasingly haunted by vivid nightmares after the death of her husband. Taylor is the attorney who may hold the key to the mystery. The Night Walker, seldom seen in recent years, is one of Castle’s final black-and-white spookfests and, aided by a spine-tingling score from “The Addams Family” composer Vic Mizzy, is also one of his trippiest.

Joan Crawford followed her smash hit What Ever Happened to Baby Jane? with this memorable psychological thriller about an ax murderer trying for a new start in life. Crawford plays Lucy Harbin, a woman who spent twenty years in a mental institution after killing her unfaithful husband and his lover. Released from the asylum, Lucy tries to renew her relationship with her now-adult daughter (Diane Baker, of Marnie and The Silence of the Lambs) only to become the prime suspect when the ax starts falling again. The supporting cast features Hollywood veteran Leif Erickson and George Kennedy, and the original screenplay was written by none other than master horror writer and Psycho novelist Robert Bloch.

The blockbuster success of Hitchcock’s Psycho inspired Castle to venture into psychological thrillers, and the filmmaker did his best to outdo that 1960 classic with this hair-trigger tale of madness, murder and a family inheritance. A dead-of-night wedding in Ventura that ends in bloodshed is just the start of the many shocks that fill this complex story, filmed in scenic Solvang. Oscar winner Hugo Friedhofer (The Best Years of Our Lives, One-Eyed Jacks) wrote the chilling score, ace noir cinematographer Burnett Guffey (The Reckless Moment, Human Desire) shot it and Castle had one of the actors billed under a pseudonym to add to the mystery. For the coup de grace, he created the “Fright Break,” which gave terrified audience members one last chance to leave the theater before the film’s startling climax. His reward for those who couldn’t muster the fortitude to stay through the end? A walk of shame along the “yellow streak” to the “Coward’s Corner,” where full admission price would be refunded while fellow patrons jeered. 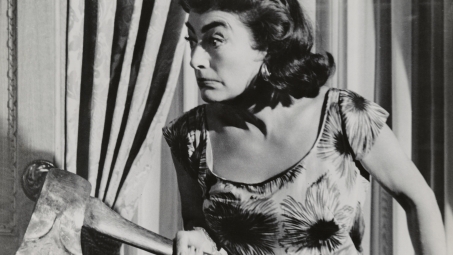