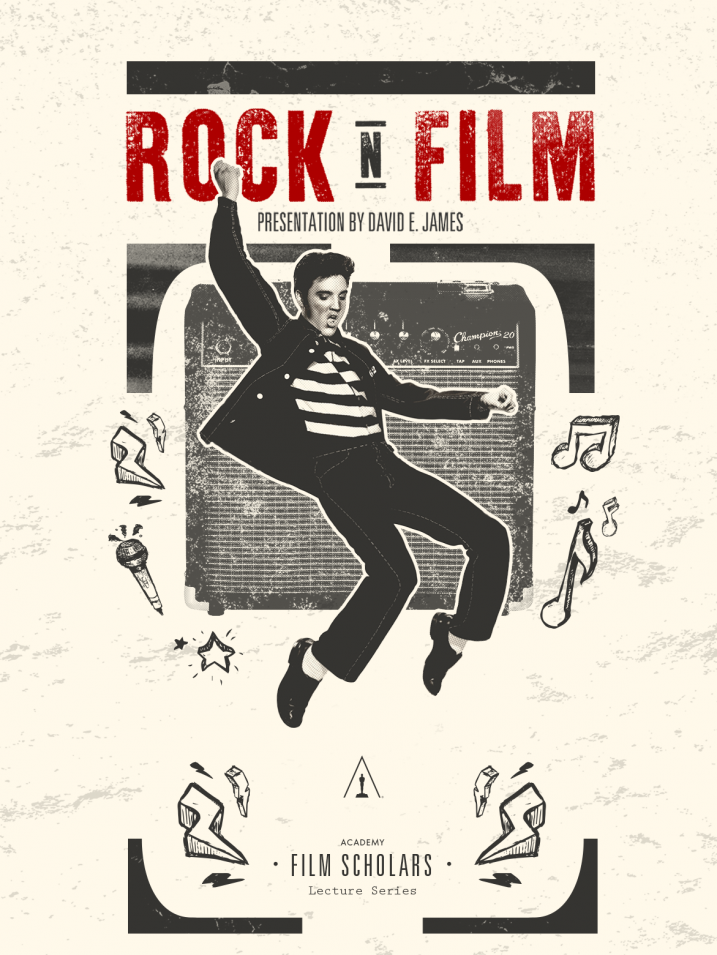 For two decades after the mid-1950s, rock music played a fundamental role in progressive social movements on both sides of the Atlantic. Rock ’N’ Film, by Academy Film Scholar David E. James, explores how rock’s capacity for cultural empowerment and its usefulness as a driver of commerce and profit were reproduced in various kinds of cinema. These include studio features (from Rock around the Clock to Elvis’s 1960s films), independent documentaries (Monterey Pop, Woodstock, Gimme Shelter and Ziggy Stardust and the Spiders from Mars), and the avant-garde (Jean-Luc Godard’s and Kenneth Anger’s films about the Rolling Stones). With the aid of curated clips, James discussed romance and community in rock ’n’ roll films, themes typically associated with classic film musicals. Books were available for purchase and signed by the author after the presentation.

David E. James teaches in the School of Cinematic Arts at the University of Southern California. His teaching and research interests focus on avant-garde cinema, culture in Los Angeles, East-Asian cinema, film and music, and working-class culture. His recent books include Power Misses: Essays across (Un)Popular Culture and The Most Typical Avant-Garde: History and Geography of Minor Cinemas in Los Angeles. He also served as a co-editor of the collections Optic Antics: The Cinema of Ken Jacobs and Alternative Projections: Experimental Film in Los Angeles, 1945-1980. He received an Academy Film Scholars grant from the Academy of Motion Picture Arts and Sciences in 2007 to research films about rock ’n’ roll. This research enabled him to write Rock ’N’ Film: Cinema’s Dance with Popular Music, which has been published by Oxford University Press.

This was the 14th in a series of lectures spotlighting recipients of the Academy Film Scholars grant. Established in 1999, the Academy Film Scholars program is designed to stimulate and support the creation of new and significant works of film scholarship about aesthetic, cultural, educational, historical, theoretical or scientific aspects of theatrical motion pictures.