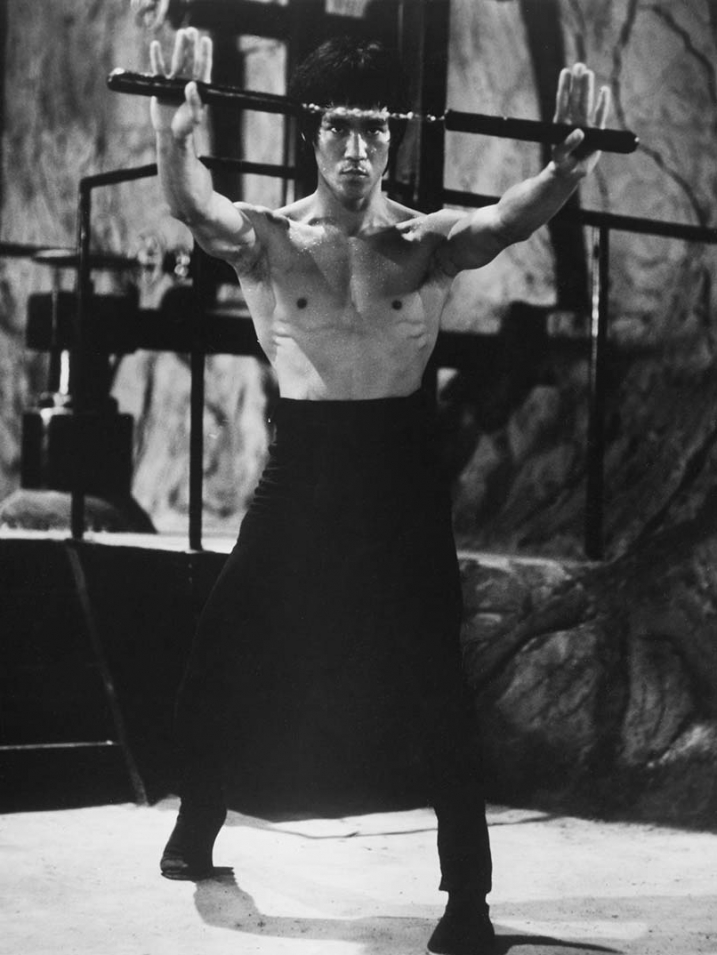 The Academy Unleashes "Enter the Dragon"

Furious fists and deadly feet were flying at the Academy on April 17, 2013, with a celebration of martial arts films and a 40th anniversary screening of Bruce Lee’s international breakthrough film, “Enter the Dragon.”

The high-octane action movies we know today would be very different without the past five decades of rich and colorful kung fu films from around the globe, with the evening designed to celebrate the opening of the Academy’s new exhibition, “Kick Ass! Kung Fu Posters from the Stephen Chin Collection,” which transformed the Academy’s Grand Lobby Gallery into an eye-popping celebration of global action stars and wild feats of physical prowess. Culled from numerous countries, the posters range from familiar kung fu-influenced films like “The Matrix” to pioneering classics from studios like Shaw Brothers, along with genre-melding titles wedding martial arts with blaxploitation, horror, science fiction, and slapstick comedy.

A lifelong kung fu movie fan whose day jobs have included President Bill Clinton’s 1992 transition team, independent film producer, and motion picture executive on such films as “Scream” and “Swingers,” Stephen Chin donated over 800 significant kung fu posters to the Academy in 2011, with highlights selected for the public to now enjoy. After a welcome from Randy Haberkamp, the Academy’s Managing Director of Programming, Education and Preservation, Chin introduced the screening by proclaiming the event “a remarkable thing.” He offered a moving portrait of how kung fu films changed the way Asians and all minorities were depicted onscreen, empowered now instead of reduced to stereotypes, and how Bruce Lee’s commitment to his craft transformed him from a struggling TV actor to a trendsetting superstar. He also shared a terrific anecdote about a Harlem theater showing the fan favorite “Five Fingers of Death,” where a gunman holding up the concession stand was thwarted by audience members energized into action by the film they were watching.

The screening marked the first public projection of an original 35mm Technicolor dye-transfer print from the Academy Film Archive, presenting the film as audiences would have seen it first run back in 1973. However, guests were first treated to a panel with some of the talented people behind the film, starting with producers Paul Heller and Fred Weintraub, who took to the stage to explain how studios at the time had no idea how to grasp the concept of a major martial arts movie at the time. “Nobody was interested in it besides us,” Heller recalled, with Weintraub continuing, “They all had to adjust their minds to something they didn’t understand.” Furthermore, contrary to the action standards of the time, they were going to make an action film with no guns – a challenge that was more than met by its star, Bruce Lee, who had made three films for Raymond Chow in Hong Kong. Weintraub also realized he and Heller had learned with this film how to deal with different cultures all over the world and shoot in a variety of emerging nations.

Lee’s daughter, Shannon Lee, the CEO of Bruce Lee Enterprises and president of the Bruce Lee Foundation, appeared to remark on the enduring cinematic legacy of her father, while the cinematographer of “Enter the Dragon,” Gil Hubbs, revealed a few secrets about the film’s unforgettable climax in the villainous Han’s deadly room of mirrors. Director Robert Clouse worked with him on building a closet in the middle of the room, whose multitude of mirrors made it a “confusing” experience no one could withstand for more than 10 or 15 minutes.


Two of the cast members who worked with Lee on the film also remembered working with Lee, including star John Saxon (who plays Roper in the film). A Hollywood actor who had trained with Stella Adler, Saxon almost backed out of the project at the beginning but was swiftly convinced by the producers, resulting in a solid action career throughout the 1970s. Among his stories were an early meeting with Lee, who performed one of his favorite impressive feats kicking Saxon back against a chair that shattered upon impact. Lee was dismayed—because that was his favorite chair, and Saxon was the only one who had managed to break it.

Formidable as the evil, scarred Oharra, black belt Bob Wall was a training partner of Lee’s and a professional karate tournament circuit mainstay in the 1960s and ‘70s alongside Joe Lewis, Skipper Mullins and Chuck Norris. He was also seen opposite Lee in “The Way of the Dragon” and “Game of Death” and recalled Lee’s persistent cinematic vision in which he “wanted to do everything real.”

Six-time Oscar nominee Lalo Schifrin was brought on to compose the film, following his popular action-packed work on films like “Bullitt” and the signature theme for television’s “Mission: Impossible.” In fact, Lee revealed upon meeting the composer that he would play the music from “Mission: Impossible” while practicing in his dojo, where he was priming himself to pioneer “a different kind of martial arts” after the discipline’s origins thousands of years ago among monks in India developed self-defense techniques. Schifrin was quick to reply that he was a kindred spirit who reacted to centuries of classical music and “went beyond” it himself. “The movie the movie was made,” he believed, “it was contagious, the energy, and I translated that into music.” Schifrin still feels a special bond with “Enter the Dragon,” as his work on the film commenced at the same time as the birth of his son, Ryan. His propulsive, sinewy score became the perfect accompaniment to Lee’s greatest film triumph, a milestone in kung fu cinema whose influence remains just as strong four decades later. 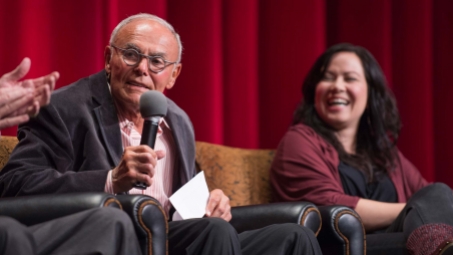 Actor John Saxon and Shannon Lee, daughter of Bruce Lee at the 40th anniversary screening of "Enter the Dragon" presented by the Academy in celebration of the new exhibition "Kick Ass!: Kung Fu Posters from the Stephen Chin Collection" 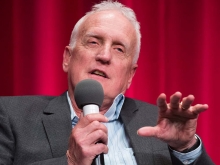 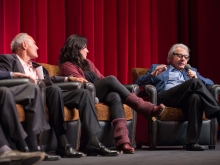 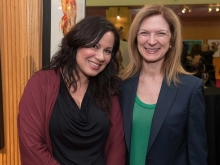 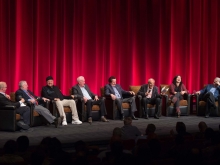 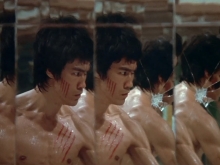 The Making of "Enter the Dragon" 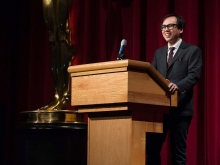 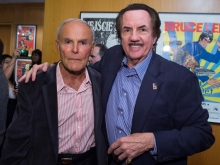 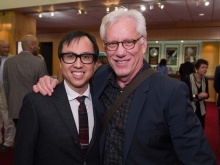 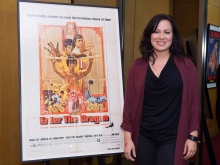 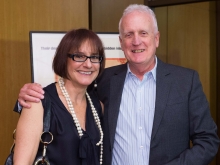 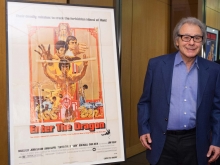 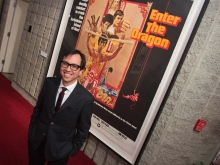 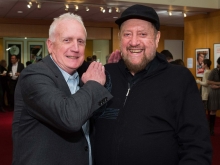 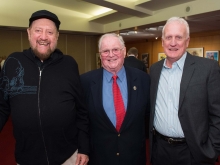 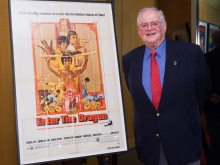 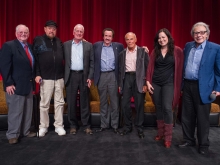 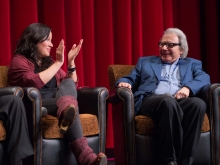 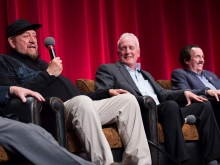 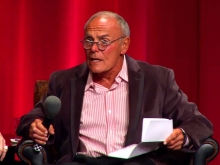 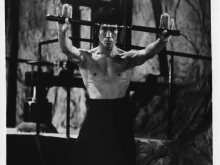 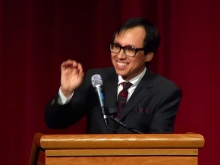 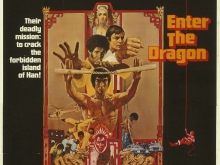