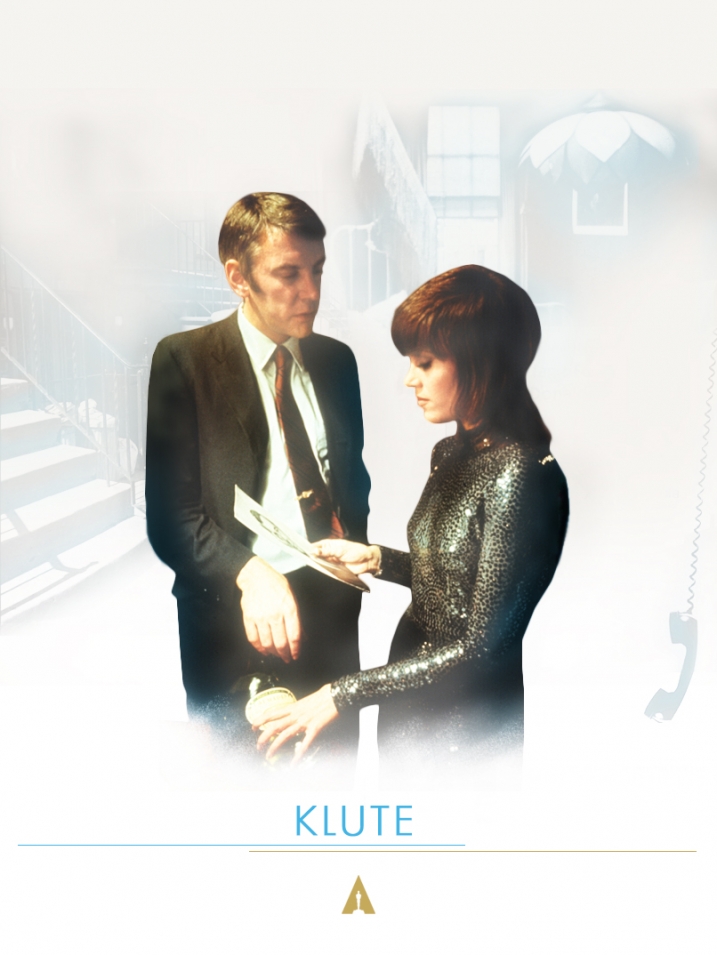 Motion picture costume design is often associated with elaborate historical costumes, although designers also create more modern garments. Using the groundbreaking urban American films of the late 1960s and 1970s, the Academy’s Friday series demonstrated how a designer’s work can be a key element in creating contemporary characters. The work of the featured designers enhanced some of the most memorable performances of the era and complemented the gritty, soul-baring aesthetic of New Hollywood, which found innovative, director-driven cinema briefly holding sway in the industry.

Jane Fonda won her first Oscar for her performance as a no-nonsense, high-class prostitute in this elegant but unnerving thriller. Donald Sutherland plays John Klute, a small-town detective sent to New York to track down a missing businessman. When Klute crosses paths with call girl Bree Daniels, they become embroiled in a tense mystery that puts both their lives in danger. Directing the Oscar-nominated screenplay by brothers Andy and Dave Lewis, Alan J. Pakula worked for the first time with cinematographer Gordon Willis and composer Michael Small to create a cinematic language of urban paranoia that helped define the films of the 1970s, in particular Pakula’s later classics The Parallax View and All the President’s Men. Ann Roth, an Oscar winner for The English Patient, designed the costumes, including Fonda’s stylish ensembles.

Paddy Chayefsky won an Oscar for his take-no-prisoners screenplay, which cast a jaundiced eye at the future of network television. William Holden is producer Max Schumacher, the last honest man in the business; Faye Dunaway is Diana Christensen, the beautiful, soulless wave of the future; and Peter Finch is Howard Beale, a veteran newsman at the end of his tether whose “mad as hell” on-screen breakdown was an instant film classic. Under Sidney Lumet’s expert direction, Finch, Dunaway and Beatrice Straight (in a brief but memorable role as Holden’s unhappy wife) won Oscars and Holden and Ned Beatty received nominations, while Theoni V. Aldredge’s costumes are a vivid depiction of the world of ’70s television both on and off camera.