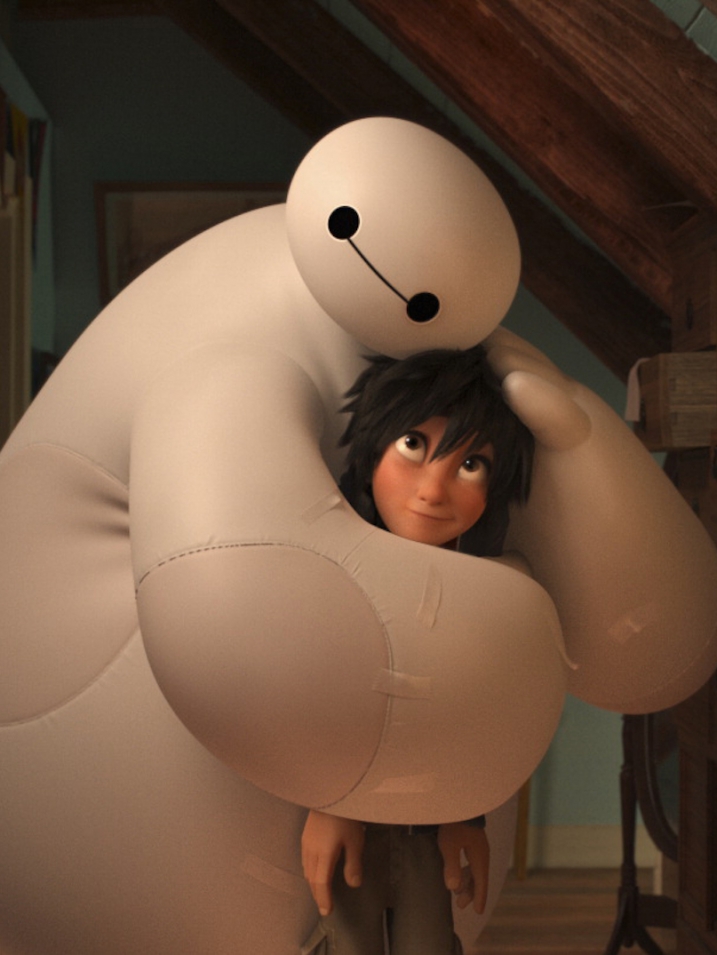 “Listen up! Use those big brains of yours to think your way around the problem! Look for a new angle!” –Hiro Hamada

The Academy took a look at the innovative technology and animation that went into crafting the Oscar-winning animated feature film Big Hero 6, including an onstage discussion with members of the film’s creative team.

This year’s Oscar winner for Best Animated Feature Film, Big Hero 6 tells the story of fourteen-year-old science prodigy Hiro, who spends his time developing fighting robots for underground competitions until his older brother introduces him to an eccentric group of young inventors. When the talented misfits band together to fight a dangerous villain, they gain an unlikely ally: a gentle healthcare bot named Baymax.

“When I was a kid, I loved Marvel comics. While working on Winnie the Pooh, I asked John Lasseter if I could explore the Marvel world for inspiration for my next film. I was encouraged to explore the Marvel vaults and one of the projects I found was called Big Hero 6. I’d never heard of it, but I liked the title and its Japanese influences.” –Big Hero 6 director Don Hall

The filmmaking team, led by directors Don Hall and Chris Williams and producer Roy Conli, steered the Marvel source material in different directions while emphasizing that technology and intelligence are the “superpowers” of the story’s heroes. Research into the cutting edge of robot technology, particularly the soft robotics being developed at Carnegie Mellon University, led to the evolution of the film’s lovable healthcare android Baymax as well as Hiro’s microbots. The film’s animation team studied robots, human babies and a variety of animals to help refine Baymax’s awkward but appealing style of movement, finding their greatest inspiration in the waddle of baby penguins.

The creation of the film’s world was equally inventive and groundbreaking in the creative and technical realms. The team chose to set their emotional yet action-packed story in the hybrid city of “San Fransokyo,” incorporating Japanese elements into an unusually detailed and geographically precise reimagining of contemporary San Francisco. To bring this novel setting to cinematic life they incorporated state-of-the-art animation and computing technologies, making use of a cloud-based, 55,000-core supercomputer that was physically located in four separate geographic sites.

The evening included film sequences and “making-of” clips alongside presentations and panel discussions highlighting the movie’s production process. The program examined the creative and technical challenges of crafting this thrilling yet heartwarming hit. 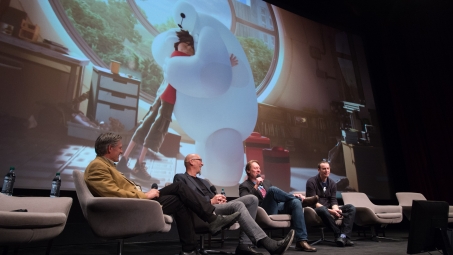 This year’s Academy Award winner for Animated Feature Film, Big Hero 6, took flight at the Academy as its ongoing “Deconstructing” post-Oscars series entered its third year on April 23, 2015. As with past events dedicated to Life of Pi and Gravity, the technological and storytelling breakthroughs of the film took center stage as the filmmakers appeared at the Samuel Goldwyn Theater for an evening hosted by Academy governor Bill Kroyer and featuring a welcome from Academy President Cheryl Boone Isaacs.

The film itself emphasizes creative problem solving and teamwork, qualities that proved useful behind the scenes as well.  Producer Roy Conli spoke first about his time at Disney including the role of John Lasseter overseeing the feature film projects at the studio, where the “caffeine patch” open space at the office allowed the staff to find an impromptu area to get together and share ideas.

“Communication is the key,” he said, which paved the way for director Don Hall’s own discussion about starting this film four years ago as he was wrapping up Winnie the Pooh. As a kid he loved both Marvel and Disney, so the conjunction of the two companies allowed him to dig into the Marvel archives for material.

The right property came in the form of Big Hero 6, a lesser-known comic book series that turned out to be just the subject matter he was looking for. Extensive scouting of Tokyo for 13 days resulted in a massive amount of research that paid off in small details (such as milk bottle boxes stacked on the sides of buildings) in the finished film that deeply impressed Japanese audiences when the film premiered at the Tokyo Film Festival. He also recalled how the character of Baymax required a particular “cuddly” look with a real-life parallel, a vinyl-covered soft robotics arm he saw at Carnegie Mellon University (and which audiences could see in the lobby of the Academy before and after the event).

Director Chris Williams, who previously co-directed Bolt for Disney, delved into the development of the story of Big Hero 6, which required extensive story meetings and a willingness to accept criticism along with praise. The character of Hiro proved to be a particular challenge since the 14-year-old boy had to have a tricky balance of vulnerability and cockiness, both of which needed to be established in his opening gambling scene. One sequence that had to be redone after it was fully animated was Baymax’s first entrance, originally conceived as part of a trade show appearance but later turned into a more intimate moment between the robot and the two brothers.

“What the heck does an animator do at Disney?” remarked head of animation Zach Parrish, who offered a dazzling demonstration of the software involved in bringing the characters and scenery to life from the film’s pre-production stages all the way to completion. For example, Maya software was required to articulate the largest cast of main characters yet in a Disney film (14 in total), while their specially-developed Denizen software was used to build 701 unique characters populating the entire film and 1324 animation cycles. This software also helped differentiate the walking styles of each of the characters, with Baymax in particular inspired by the gait of a baby penguin. As an animator he also had to fuse what he termed the two styles of the film, the more grounded and real aesthetic of the first half and the increasingly fantastic superhero look that became more prominent as the story progressed.

Visual effects supervisor Kyle Odermatt noted that one of the biggest challenges was the setting of San Fransokyo, a hybrid of San Francisco and Tokyo filled with geographic and architectural surprises. Bringing the city to life required the use of the Hyperion rendering system, developed by Disney to provide lifelike lighting and atmosphere for a fully-populated environment. Thanks to the new technology, they were able to generate distinct buildings without having to hard code every single one, with an end result of 83,000 buildings and 215,000 street lights. The atmosphere was vital as well, especially capturing the look of fog coming in and out of the bay throughout the course of the day. Denizen was also used to create a variety of character shapes, hairstyles and clothing, with Disney employees even creating their own caricatures that can be seen at various points throughout the film. The demands were high, requiring more geographical complexity than the last three Disney animated films combined and a data center (split over multiple locations due to power limitations) with 55,000 cores. Also employed was Coda, a queuing system designed to handle all of these process and job prioritizations over these separate locations, while the Mandelbuld 3D fractal generator and rendering software was implemented for the striking new colors and textures of the film’s dynamic wormhole climax.

Finally director of cinematography lighting Adolph Lusinsky went into more detail about the role of light in the film, with new breakthroughs allowing them to simulate the complex bouncing of light off and through objects made possible through the use of Hyperion. For example, the delicate absorption of light seen in a ping pong ball could finally be replicated for the difficult translucent texture of Baymax, whose animation required light to bounce ten times (with one bounce being the norm). The cinematography of the film required naturalistic lighting including the crisp skies and foggy interludes of San Francisco, which were studied by spending an entire day analyzing the sunrise through sunset atop 555 California Street, the second highest building in that city. The film was given an even more natural appearance through the use of camera distortion effects and the simulation of the veneer of film stock, plus creative touches like the greenish hue of urban lighting at night deployed for the film’s memorable first chase between Hiro and his nemesis. However, as the filmmakers all noted when they reunited on stage at the end of the evening, their experience was truly special and resulted in a groundbreaking film mixing both heart and humor in equal amounts. Conli noted at the beginning that Disney films are united in their basis in “Once upon a time,” and the cinematic result here is a modern fairy tale for the ages with a cutting-edge style as well. 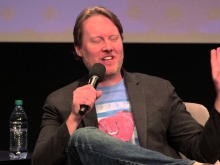 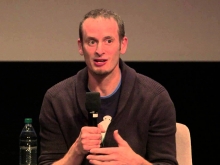 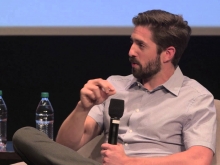 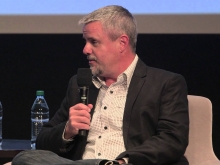 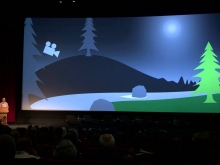 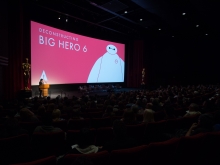 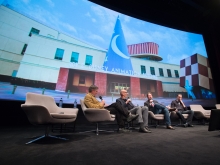 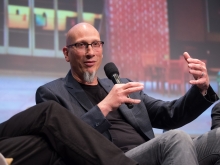 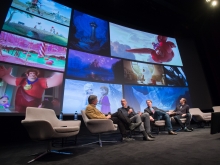 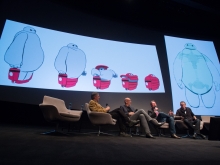 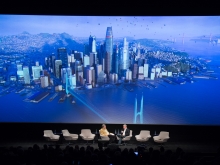