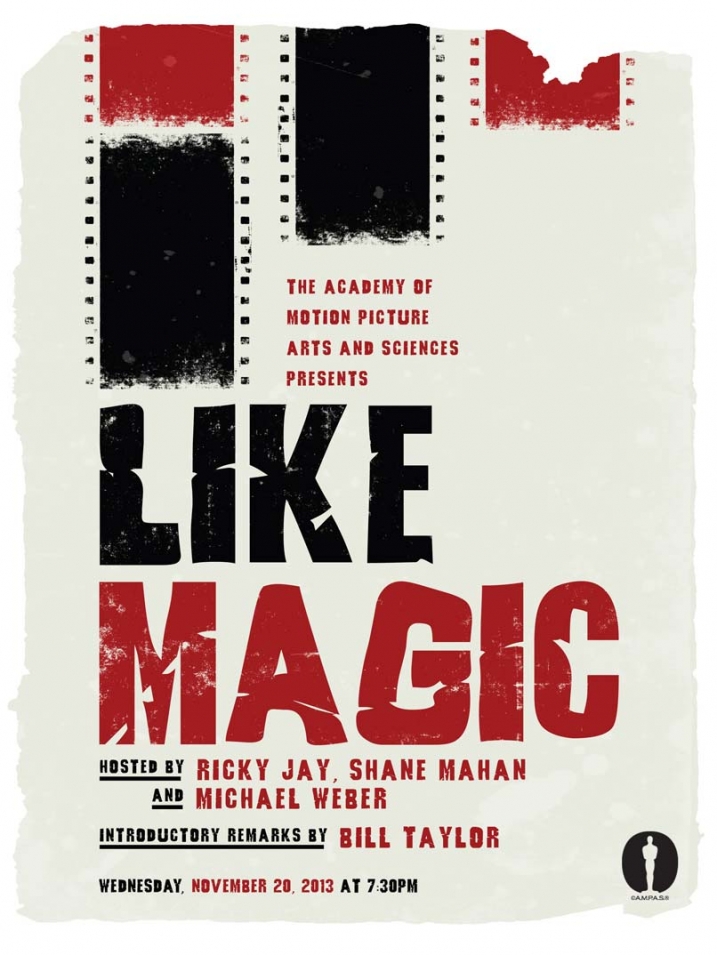 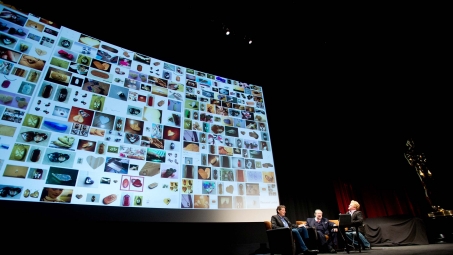 The art of illusion and sleight of hand took center stage at “Like Magic,” an Academy event at the Samuel Goldwyn Theater on November 20, 2013. With an appropriately mystical veil of rain outside, itself an inexplicable event in Los Angeles this time of year, a packed house was entertained and enlightened by masters of the medium offering a glimpse into their mysterious craft.

Equally at home in front of the camera and a live crowd, sleight-of-hand artist Ricky Jay began by guiding the audience through the pantheon of pioneers whose acts form the basis of the visual trickery still practiced in movies today. Among them are Félicien Trewey, Leopoldo Fregoli and even Harry Houdini, who starred in several silent films (including “The Master Mystery,” which featured what may have been the screen’s first robot).

Some of the earliest filmmakers were themselves well versed in the art of illusion, including Georges Méliès and Segundo de Chomón, whose work from more than a century ago provided illustrations of how classic stop-motion and film editing techniques can fool the modern viewer’s eye.

Joining Jay onstage to show how these innovations are used today were fellow illusionist Michael Weber, Jay’s partner in Deceptive Practices (a consulting company on numerous Hollywood films), and effects artist Shane Mahan, who worked with the legendary Stan Winston for 25 years and is now a partner in Legacy Effects. Mahan earned an Oscar nomination for his work on “Iron Man” (2008), a film that perfectly exemplifies how practical effects can be just as effective as CGI: a false body and a breathing bladder were used to create what appeared to be a hollow metal receptacle in Robert Downey Jr.’s chest.

Perched on a sofa onstage, Mahan described how a startling beheading was achieved on another of his feature projects, “Wrong Turn” (2003), using a hollow tree and a trick axe. The star of that memorable scene, Emmanuelle Chriqui, took to the stage to join her cinema colleague. When she tried to hug him, Mahan surprised and delighted the audience by emerging from behind the sofa to receive the greeting – instantly detaching himself from the false body that remained seated on the sofa. It showed how the simple but effective trick could even be achieved in front of a live crowd.

The pair shared memories of shooting the scene, then segued into additional magic-based clips from familiar films ranging from “Terminator 2: Judgment Day” (1991), which employed animatronics and star Linda Hamilton’s twin sister to show a chip being removed from Arnold Schwarzenegger’s Terminator head, to “Beauty and the Beast” (1946) and “Bram Stoker’s Dracula” (1992), in which reverse photography made actors seemingly emerge from a wall and a bed, respectively.

Other examples of modern magic based on classic principles came from “Snow White and the Huntsman” (2012), which used forced perspective to create dwarves from full-sized actors, and “Pacific Rim” (2013), in which Mahan used a double-walled chamber and simple hydraulics to drain a gold liquid from space helmets. A similar device, dubbed the “Tantalus drink” (after the famous Greek myth), was demonstrated onstage with Weber holding a clear coffee cup that seemed to empty itself, and in a scene from the film “Congo” (1995) for which he designed the special glass that allowed Amy the Gorilla to “drink” a martini.

The use of magic effects in conjunction with modern digital tools was demonstrated in sequences from “Forrest Gump” (1994). Actor Gary Sinise’s character, Lieutenant Dan, appeared without legs, thanks to both digital artistry from ILM and the special illusionary wheelchair designed by Deceptive Practices.

More traditional methods are still used effectively on their own. For another film, “The Illusionist” (2006), the pair drew inspiration from the work of the famous French magician Jean Eugène Robert-Houdin, whose “Orange Tree” act was adapted for the character played by Edward Norton. They also created a sequence based on Robert-Houdin’s “Light and Heavy Chest,” in which a sword appears to become stuck upright on a wooden stage floor. The film’s most romantic flourish was an illusionary locket that opens through two seemingly contradictory movements to reveal a secret inside. All of these effects were devised to simultaneously develop character and story as well as beguile the audience. As a special surprise finale, Ricky Jay performed his version of The Orange Tree live onstage for the enraptured Goldwyn crowd.

Jay and Weber wouldn’t reveal specifically how several of the illusions were achieved, however, since mystery is an element that keeps magic viable for generations to come. As Weber beautifully summed it up, “We don’t keep secrets from our audiences; we keep secrets for our audiences.”

A Touch of Magic at The Academy 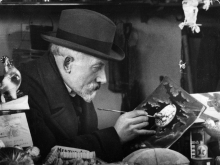 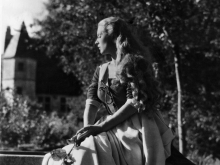 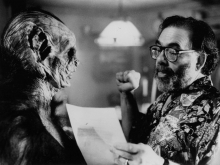 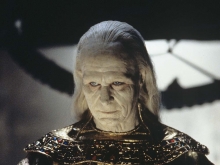 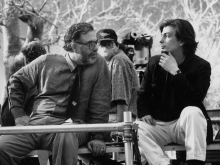 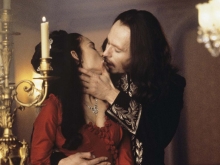 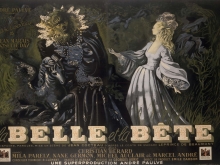 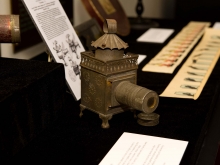 A Touch of Magic at The Academy Highlight 1 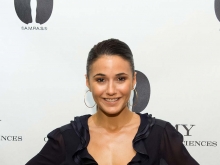 A Touch of Magic at The Academy Highlight 2 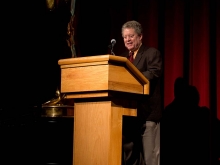 A Touch of Magic at The Academy Highlight 3 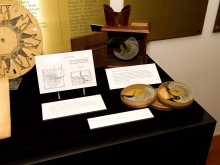 A Touch of Magic at The Academy Highlight 4 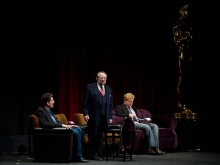 A Touch of Magic at The Academy Highlight 5 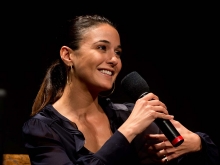 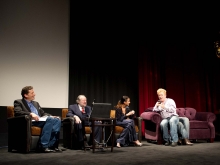 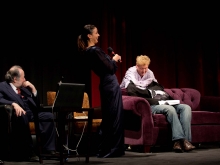 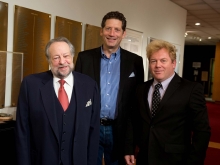 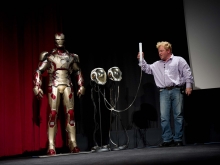 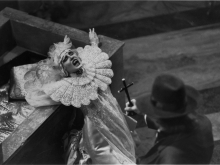 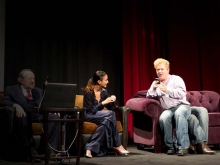 A Touch of Magic at The Academy Small Overview 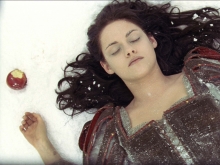 Snow White and the Huntsman 1 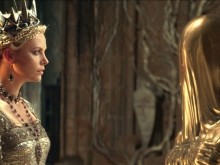 Snow White and the Huntsman 2 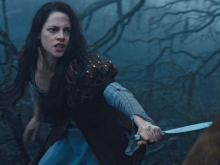 Snow White and the Huntsman 3 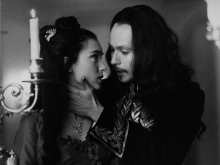 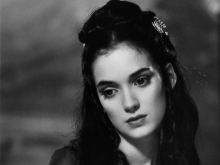