The Hollywood Professional Association (HPA) Technology Retreat is the ‘must attend’ annual event for top studio and industry technical executives where they share ideas and help map the future of the motion picture, television, broadcast and related industries.   This year, the Academy Color Encoding System (ACES) was front and center at not only the Academy-organized events but in other’s discussions of workflow and HDR issues that are facing professionals around the globe.

ACES was on display with a booth in the HPA Innovation Zone, with noted UK Cinematographer Geoff Boyle demonstrating the benefits of ACES. Geoff showed how he used ACES in his recent (and well-respected) camera and lens tests.  In addition to reconciling the multiple camera data formats, ACES enabled an easy HDR grade of the material.

Geoff also showed how ACES can be integrated into workflows today, with current generation products. For more information on Geoff’s presentation, please see the Cameo feature in this month’s newsletter.

ACES at HPA
Lots of traffic at ACES booth in the Innovation Zone
As noted in Debra Kaufman’s coverage of the on-set production workflow panel, Cinematographer and ICG president Steven Poster, ASC along with cinematographers Bill Bennett, ASC and Mark Weingartner, talked about ACES on-set and exchanged ideas with Canon’s Larry Thorpe about how they’d like to see ACES implemented in Cameras and Displays.  (Canon is one of 10 ACES Product Partners who were displaying at the show.)
(http://www.etcentric.org/hpa-tech-retreat-the-production-workflow-incorporating-hdr/) 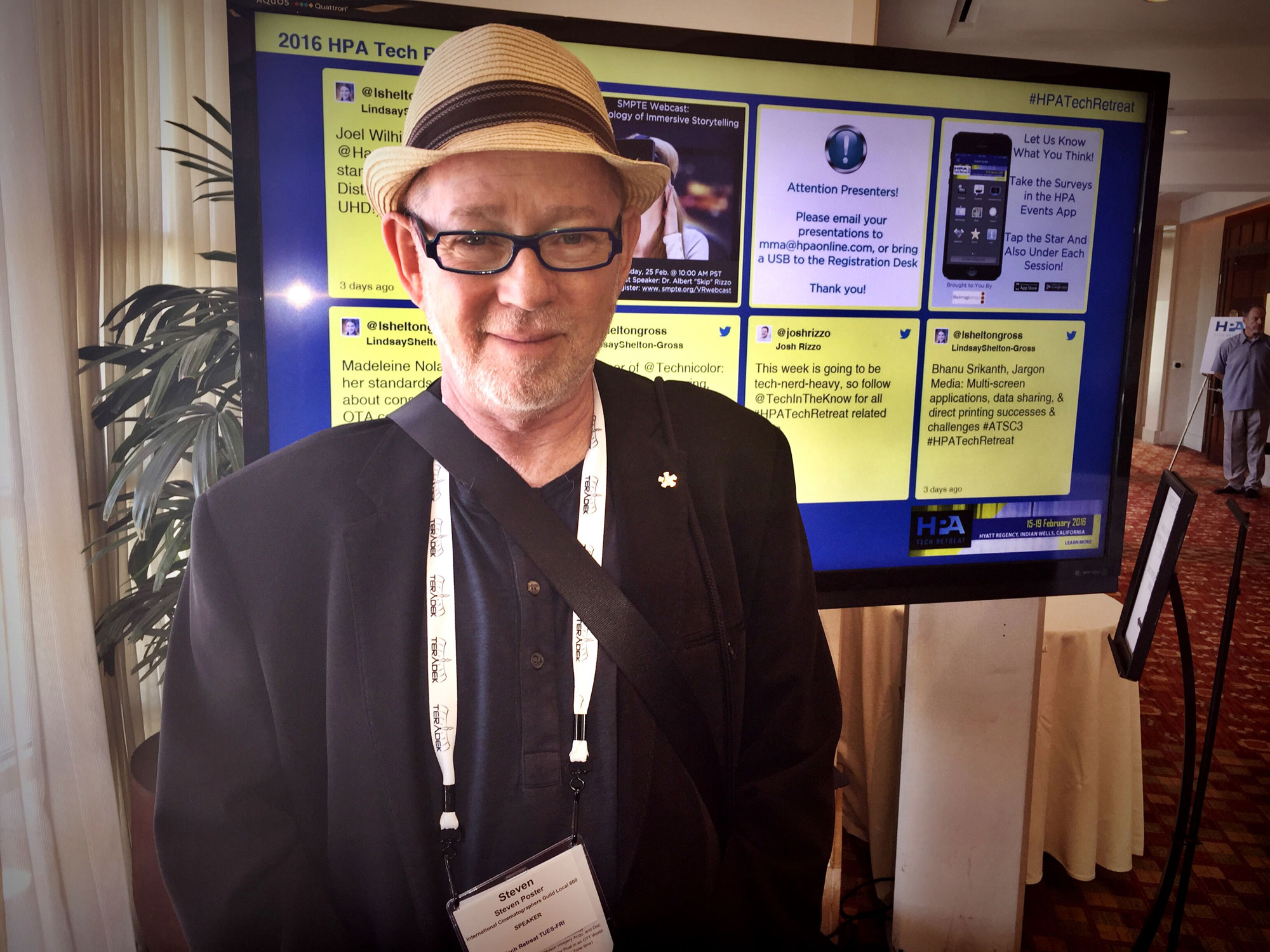 ACES at HPA
Steven Poster summed it up: “ACES is a real gift to the entire production pipeline”
HPA Tech Retreat: How the Pros Handle HDR in Post Production
ACES was also part of the conversation on the post production side. As writer Debra Kaufman notes, Sony’s Bill Baggelaar explained “ACES is one of those technologies that could help us standardize”.  (http://www.etcentric.org/hpa-tech-retreat-how-the-pros-handle-hdr-in-post-production/)  Bill also had an extended presentation at the ACES 1.0 – One Year Later panel later in the week. 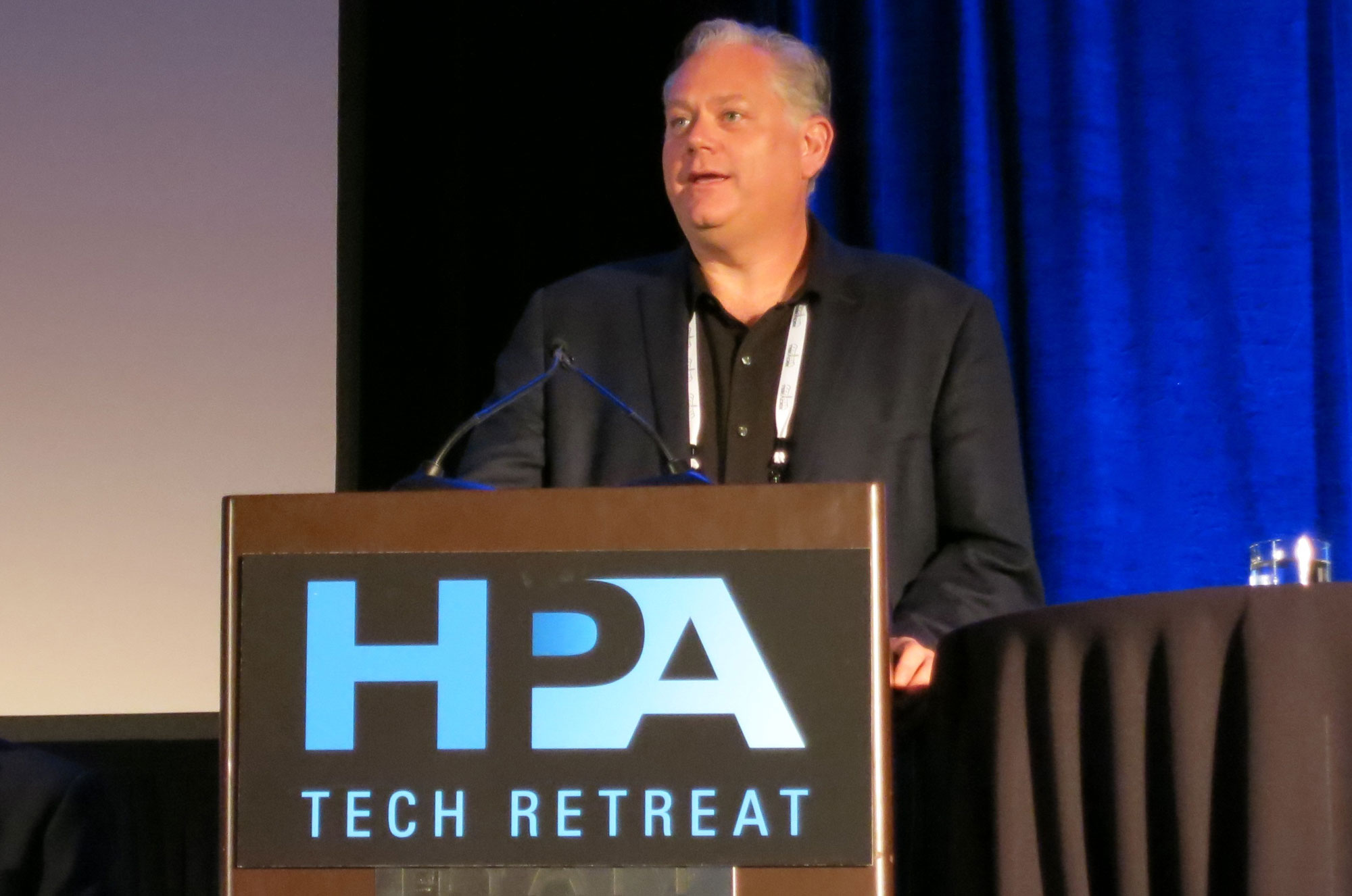 ACES at HPA
Bill Baggelaar talks ACES in Post Production Panel
ACES 1.0 – One Year Later
ACES was the subject of a dedicated panel at the Tech Retreat to discuss its technical implementation and adoption progress in the year since its industry-wide launch. 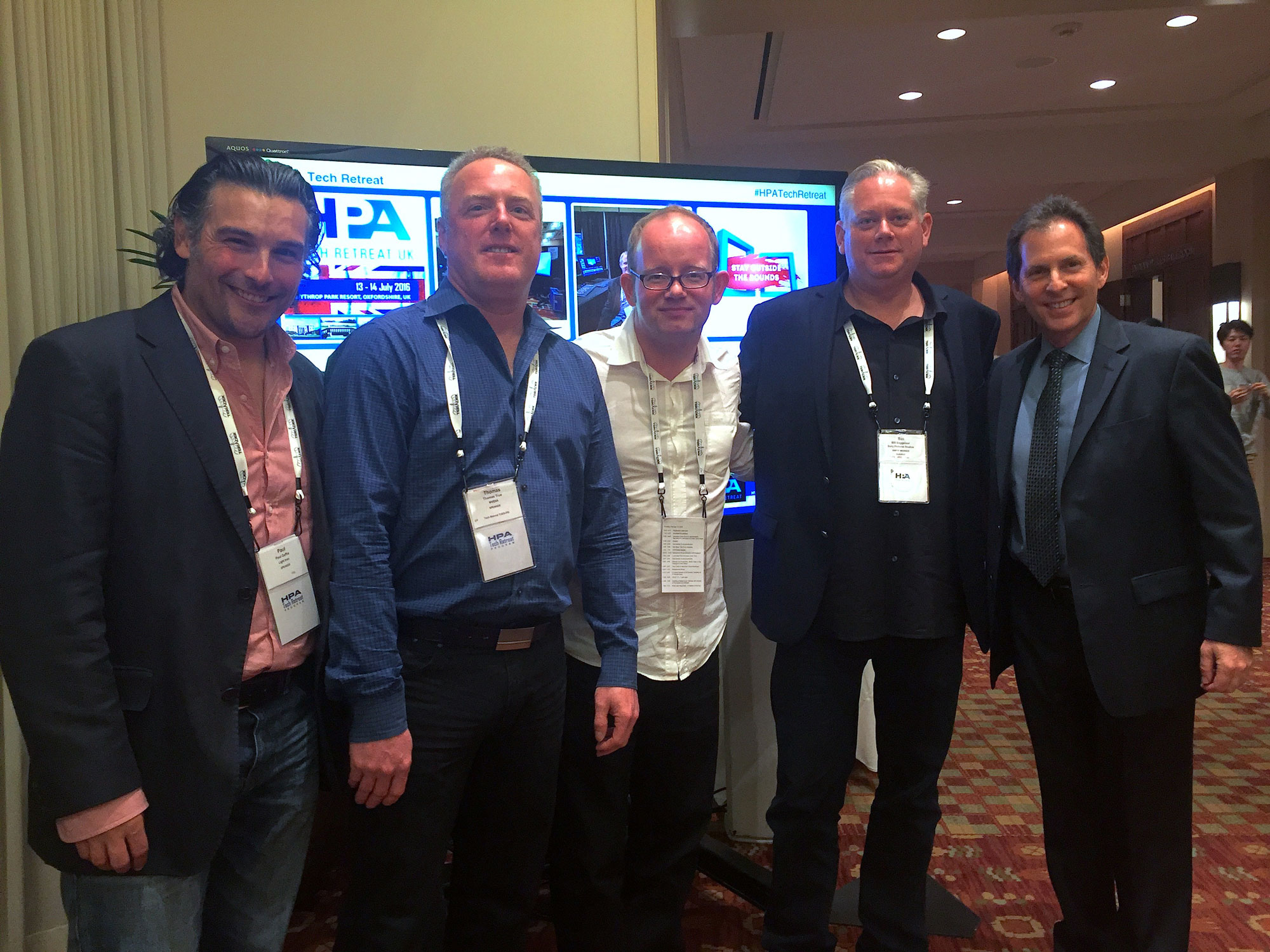 ACES at HPA
“ACES 1.0 – One Year Later” panelists
The panel was moderated by Andy Maltz, Managing Director, Science and Technology Council, Academy of Motion Picture Arts and Sciences, who presented a long list of adoption activities that have launched this past year including (partial list): well over a dozen educational events in the US and internationally; the announcement of 25 Product Partner Companies who have signed up for the ACES Logo Program and are implementing ACES 1.0 into their products; the ACES website, the monthly ACES Newsletter, the ACES Video channel, upcoming ACES Archiving Standards (with all 6 major studios and others signed up as proponents), and a brief glimpse of an upcoming ACES Discussion Board to be launched in the coming months.

ACES at HPA
Andy Maltz presents growth in ACES global adoption and Product Partner Program
Tom True Joining the panel with an ACES story from the computer graphics hardware and software industry was Tom True, Senior Applied Engineer for Professional Video and Image Processing for Nvidia. Tom presented the rationale for why Nvidia decided to use ACES for color management within their GPU drivers.  He described a long list of reasons including flexibility, ease of implementation, adaptability, and successful use by others.  Nvidia’s adoption of ACES is significant because, as covered by a number of Tech Retreat panels and discussions, traditional motion picture production, gaming, VR and other efforts are all converging technologically, thereby creating pressure to create assets once and then manage and deploy those assets across all platforms. 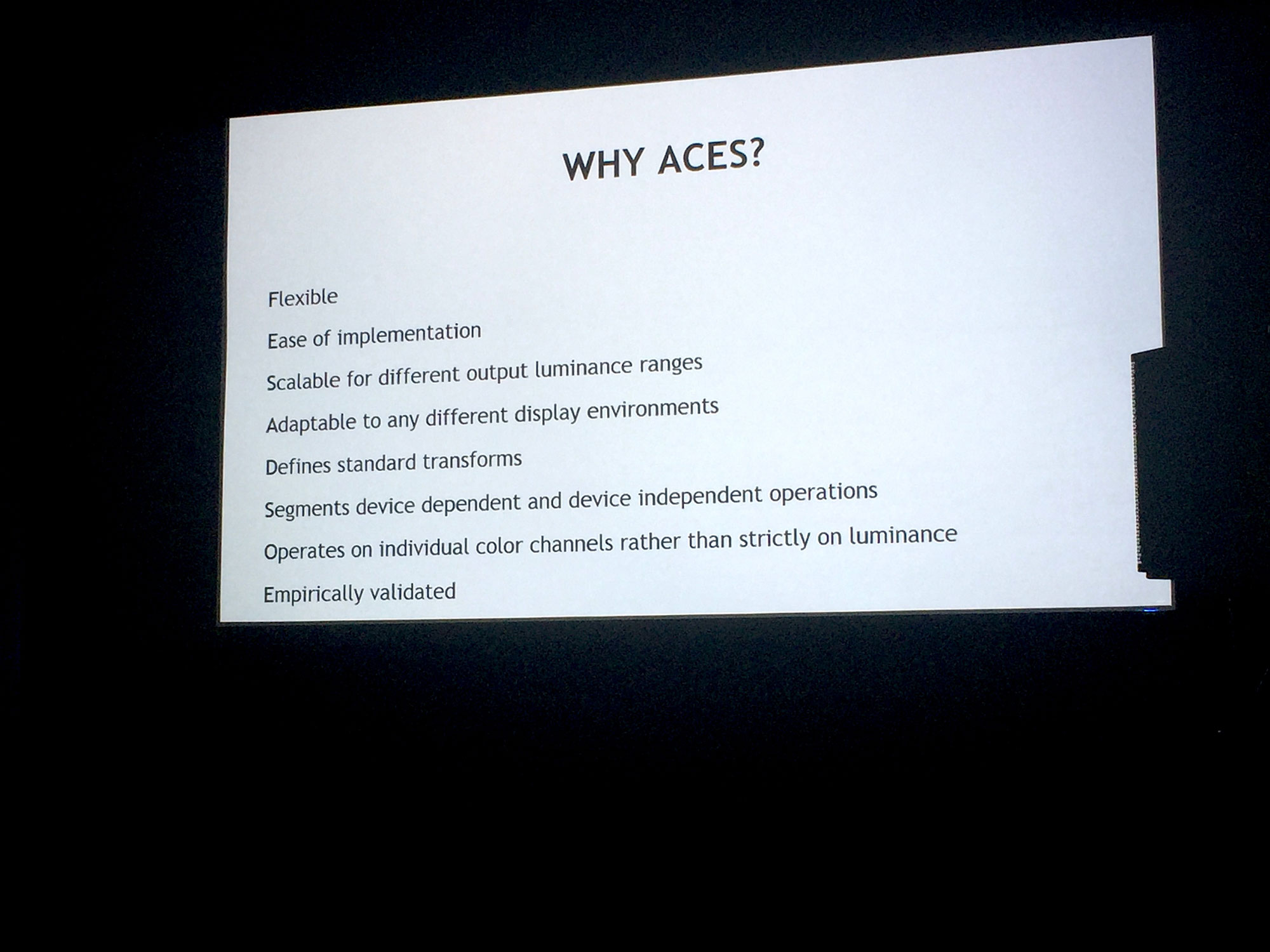 ACES at HPA
Tom True presents his thoughts on ACES
Jeroen Schulte ACES is being embraced by yet another well-known VFX company.  Jeroen “J” Shulte, HDR Image Pipeline Supervisor at Industrial Light & Magic, described ILM’s adoption of the ACEScg color space for their graphics work on a number of current and upcoming major features.  According to J, the “goal at ILM is to represent all CG/render elements created at the Company as if they come from a single camera, which we of course share across all projects. Our ‘camera’ will produce high dynamic range, scene-linear pixels in the ACEScg color space.” 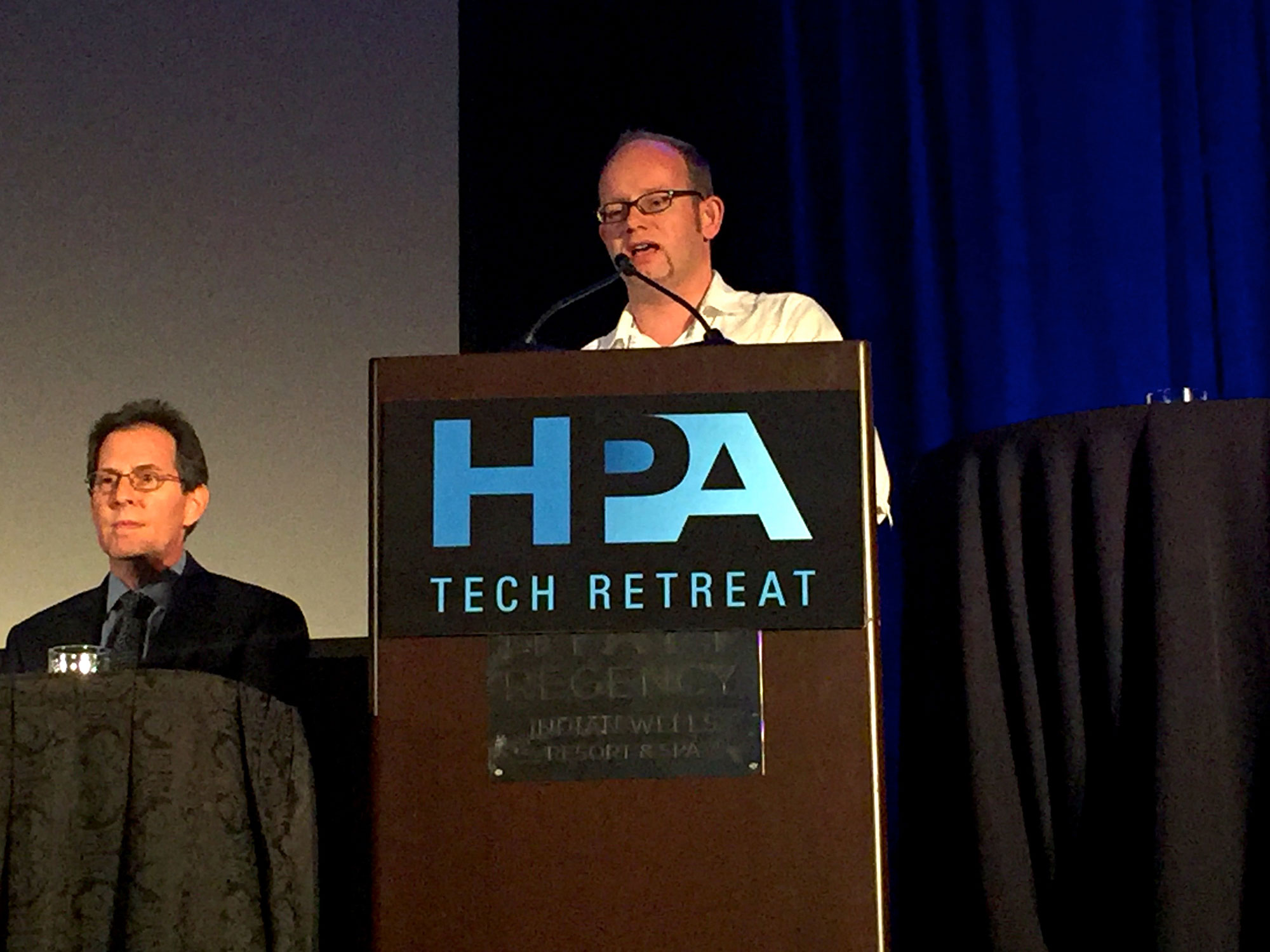 ACES at HPA
Jeroen “J” Shulte, highlights ILM’s use of ACES
Recent ACEScg projects at ILM include The Martian, 13 Hours and Terminator 5 – Genesys plus several additional shows that are in production now. 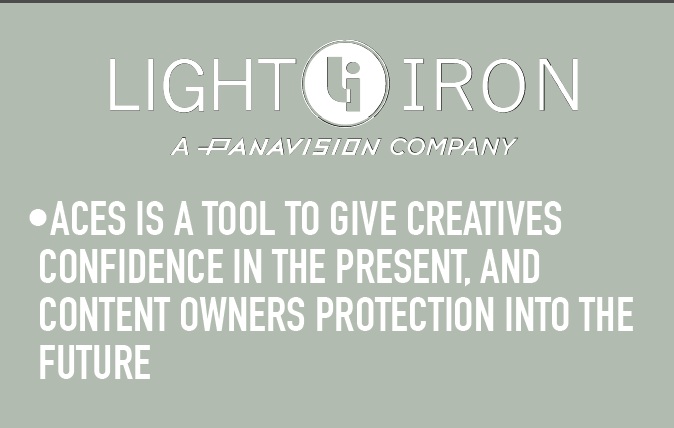 Paul Geffre, Head of Workflow Strategy described how they integrate ACES into their workflow to satisfy the needs of his creative and network/studio clients.

Bill Baggelaar Sony is actively re-mastering its film library for HDR and Bill Baggelaar, SVP Technology, Sony Pictures Entertainment described how ACES enables future-proofing the Company’s content.  He finds “projects finished in ACES are typically easier and faster to regrade for HDR” and finishing in ACES “gives a better chance at long-term re-purposing.” 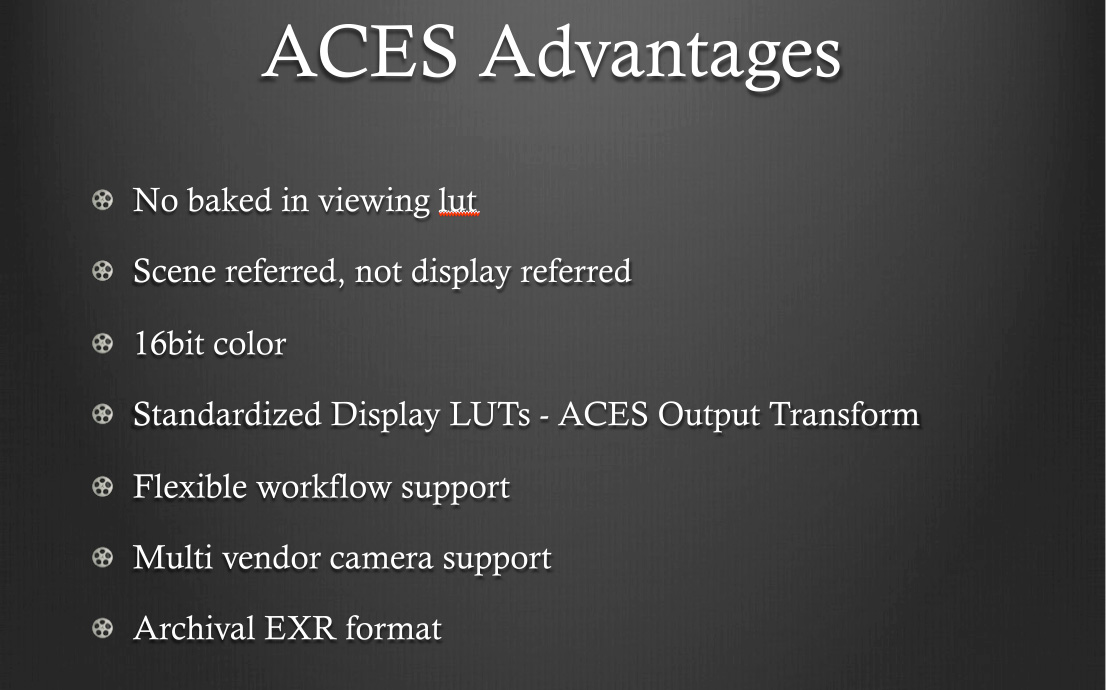 ACES at HPA
Sony’s Bill Baggelaar details ACES benefits to studios and producers.
The 2016 Tech Retreat was confirmation that all levels of professionals in the industry are using ACES, and momentum is building for full adoption and new innovation as ACES continues to be integrated into products and workflows.
Tags:
ACES
ACES NEWSLETTER VOLUME 4